Full ratings. Black Clover and JoJo seemed to retain better in the demo losing .02 and .01 compared to .03 for Paranoia Agent. If they consistently retain better, can they make it to the front half and if JoJo consistently stays in the top 25?

Ratings time. MHA goes back into premieres for one week and has a huge dip, going from .29 to .20 and failed to make the top 10, charting at #12. UFC competition had some to do with it charting lower than the past few weeks of premieres. It looks like unlike Super, MHA can't consistently stay in the top 10. Still, the fact that it can chart high on occasion shows it is a success, just not as much of one as Dragonball. One thing that is weird is that the rerun week did better than the premiere episodes that aired both before and after it. We'll see if that was Oddity to note, Adult Swim classified Paranoia Agent as a premiere rather than a rerun this week fore some reason and made it to #25. JoJo's high charting was a fluke as it went to #29, which is still better than charting in the 40s like it did for most of its run before this month.Black Clover beat Paranoia Agent and would have charted higher if it were properly classified as a premiere. Beating Paranoia Agent consistently is the only way I can see it earning a promotion.
12:00a My Hero Academia 463 0.20 256
12:30a Paranoia Agent 313 0.15 190
1:00a Mob Psycho 100 (r) 305 0.16 207
1:30a Black Clover (r) 294 0.16 201
2:00a JoJo’s Bizarre Adventure: Golden Wind 267 0.14 179
2:30a Naruto: Shippuden (r) 233 0.13 165

Uhhh... hate to be that guy but the ratings?

aegisrawks said:
Uhhh... hate to be that guy but the ratings?
Click to expand...

Memorial Day delays the ratings by a day. They should come tomorrow.

Weird indeed. Repeats may be stable just enough that once S4 concludes it could keep lead-off for a while or at least until they have their next new-to-US premier in place. It'd be strange to start out with 3 repeats before 3 premiers, but in the end given numerous on and off weeks where we just don't know what could happen as I think it could work in this case, granted misgivings in the past leading off with a rerun and some decisions to still go with that. MHA though only imo since it's a recurring/current show.

Dan's Revenge said:
Weird indeed. Repeats may be stable just enough that once S4 concludes it could keep lead-off for a while or at least until they have their next new-to-US premier in place.
Click to expand...

It could be a long time before they get anything new and the success of reruns may encourage them to be the rerun factory they were in the dark ages of 2008-2012, with Bebop, GITS, FLCL, FMA, Inuyasha and the like rerunning ad nauseum. The coronavirus has made it where Tower of God is pretty much the only action title to air this year and I imagine Crunchyroll doesn't want its competition to have it. Keeping MHA reruns might be the only option if they can't snag Tower of God and they have to wait a while for the SAO and Fire Force dubs.

Top 150 ratings. News dominated the top 150 because of recent events. JoJo was only #70. Full ratings will come later. 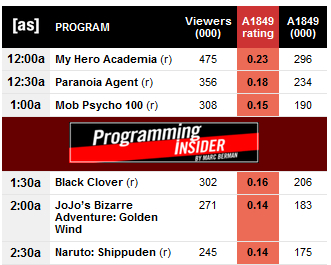 MHA ratings keep going up and up. Black Clover beat Mob, but with only 5 episodes left, there's little hope of it ever getting a promotion.

June 6 ratings. MHA does better with each week of reruns and it's weird. With this much of a sample size, reruns might actually be sustainable. Neither Ballmastrzs could quite hit JoJo's .14. Black Clover couldn't beat Mob twice in a row and it seems a promotion is a far shot from happening with a haitus or reruns likely in the near future.

Yay for MHA but man, that's a huge drop after it.

Yojimbo said:
Yay for MHA but man, that's a huge drop after it.
Click to expand...

The second show usually has a huge drop and Paranoia Agent is a 15+ year old rerun. The fact that its loss was fewer than 200K is pretty good considering the circumstances and that 200K+ drops were commonplace when Super was on the block.
Reactions: Light Lucario and Yojimbo

Full ratings. Ballmastrz first week was rough, but it did on par with Paranoia Agent this week. Nothing below .18. Reruns seem to actually do well. Toonami's ratings have fluctuated pretty violently lately looking at this page so I doubt this will be the norm. We will see shows with .12 ratings in the near future. Black Clover has scored exactly two wins over Mob Psycho 100, but the margin Black Clover and Ballmastrz beat it seems too thin to justify a promotion. Funimation is putting out more dubbed episodes and the odds of a delay are lower, but it seems like Adult Swim is dead set on it being in the back.

Top 25 ratings and MHA is in the top 10 being the top rated scripted program. First time in about a month we have MHA over 500K. Full ratings seem to come out a little later than they used to so it might take a while for me to edit this post. Edit: Full ratingsa nd MHA at .27 for the first time in a while. Big drop for Paranoia Agent, but at least it's not a 200K drop. I wonder if the 200K+ drops will return when Super returns. One of the Ballmastrz beat Black Clover in the demo again. Ballmastrz actually seems to be outdoing what JoJo used to do in terms of retention.

What happened to last week's ratings?

The typical sources for ratings info are being unusually late, especially in recent months.

Finally, the ratings are out! 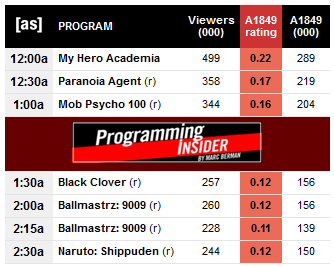 MHA ranked top 3! The show did pretty good, but nowhere near as good as Super as it only topped 700K maybe twice ever and didn't consistently rank top 5. Super probably payed the bills for acquisitions and now the model seems to focus on original shows and reruns. We'll see what those con announcements are, but hardly any announcement has been good.
You must log in or register to reply here.
Share:
Facebook Twitter Reddit Pinterest Tumblr WhatsApp Email Link

19MagiswordLane
Butch Hartman is hinting again that 'Danny Phantom' might come back.
Yesterday at 6:03 PM •••

SweetShop209
Does anyone find it a bit strange that Misty Lee has co-written 2 Scooby Doo productions (the Abracadabra Doo movie and the Spooky Scarecrow) and yet she's never done any voice acting in Scooby Doo? The former is especially strange since it's about stage magic, and she's also known for being a talented stage magician. On a related note, she should definitely voice Zatanna sometime in the future. It's easy casting.
Yesterday at 5:38 PM •••

SweetShop209
And the winner is "The Grim Adventures Of The KND" which got 3 votes. "Modern Primitives" got nothing. The next matchup is between "Sky Pirates In The Sky" and "Quack Pack" .

SoundDestroyer
Who is the most yellow-est fella that lives under the sea? Today SpongeBob and his VA Tom Kenny are celebrating Birthday! What a coincidence!
And yes, SpongeBob was born on July 14,1986, exactly 34 years ago!
Yesterday at 1:02 AM •••
Top Bottom