Your Toys R Us Memories

I just learned that my local Toys 'R' Us already closed (and all the ones left in this state will close tomorrow), so I might as well share some details about the last time I went there:
I purchased the Hulkbuster Smash-Up Lego set, which seemed cheaper and/or easier to find there than at our local Lego store. I had heard rumors of TRU closing their remaining stores soon, but the cashier denied them. Ominously, "Pompeii" by Bastille played over the speakers.
I don't know yet what will happen to the building.

I'd been stocking up on plushies for the last month during the closing sale and I'm still pretty much devastated. I can't believe it.

It's sad to see some of the final sales posters and the emptiness of a store, especially for Toys R Us.

I didn't get a chance to go to my local Toys R Us before it closed. I wanted to, but I was too conflicted to see the empty shelves and people working despite only having a few more months for their jobs. They even had a "Now Hiring" sign shortly before they announced the stores were closing down, which made it even more painful. Even though I also felt sad for Blockbuster employees when they were going out of business too, I still managed to go to a couple of the stores. Both Blockbusters and Toys R Us are nostalgic places for me. For a long time, it was a weekend treat to go to Blockbusters to rent a movie or video game and Toys R Us was always fun to go to.

By the time Blockbusters closed down, the idea of going out to rent a movie was already extremely outdated, so it felt more natural for the business to shut down. Toys aren't outdated. The times have changed and I don't know what kids play with in general, but kids still like toys the last time I checked. Plus, the reason why Toys R Us was forced into this position still leaves a bad taste in my mouth.

I should have at least tried to order off of their website, but I didn't think of that obvious compromise until now when I felt even more conflicted over not going to the store when I had the chance. I don't know if that closed down sooner, but I wish I had thought of that at least.

I also wanted to keep my last visits to Toys R Us more positive instead of seeing full of empty shelves. I remember pre-ordering Pokemon OR/AS there instead of at Gamestop because they had better pre-order bonuses. I thought I would get two Mega Charizard plush toys and I remember being told that when I pre-ordered the games. Once I got there, they only gave me one. I explained to them the situation and they gave me the other one because that was what I was told when I pre-ordered the game, so that was really nice. The last time I was in the store was a couple of years ago. My friend had to move away and we decided to just walk around aimlessly in the store to see if there was something we could get. I don't remember if we did buy anything, but it was fun to walk around with her, talking about the different stuff they had in the store and spending time before she had to leave. As much as I regret not going to Toys R Us, I also kind of like that my last times going into the store were positive experiences. I'm just full of conflicting emotions about this today.

As much as it is sad to see a nostalgic place like Toys R Us go down, the real tragedy comes from the countless innocent people losing their jobs over this, especially the lower end employees. I just hope that they'll be able to find work. I don't know how possible it is for Toys R Us to come back, but I could see it happening someday given that it is a nostalgic property and the name alone would attract quite a few families to any re-opened store. It might be hoping for too much, but I'd rather hope for the best whenever possible.

I was at a mall today where there was a TRU, and kids made these "goodbye notes" to put on display in the window. 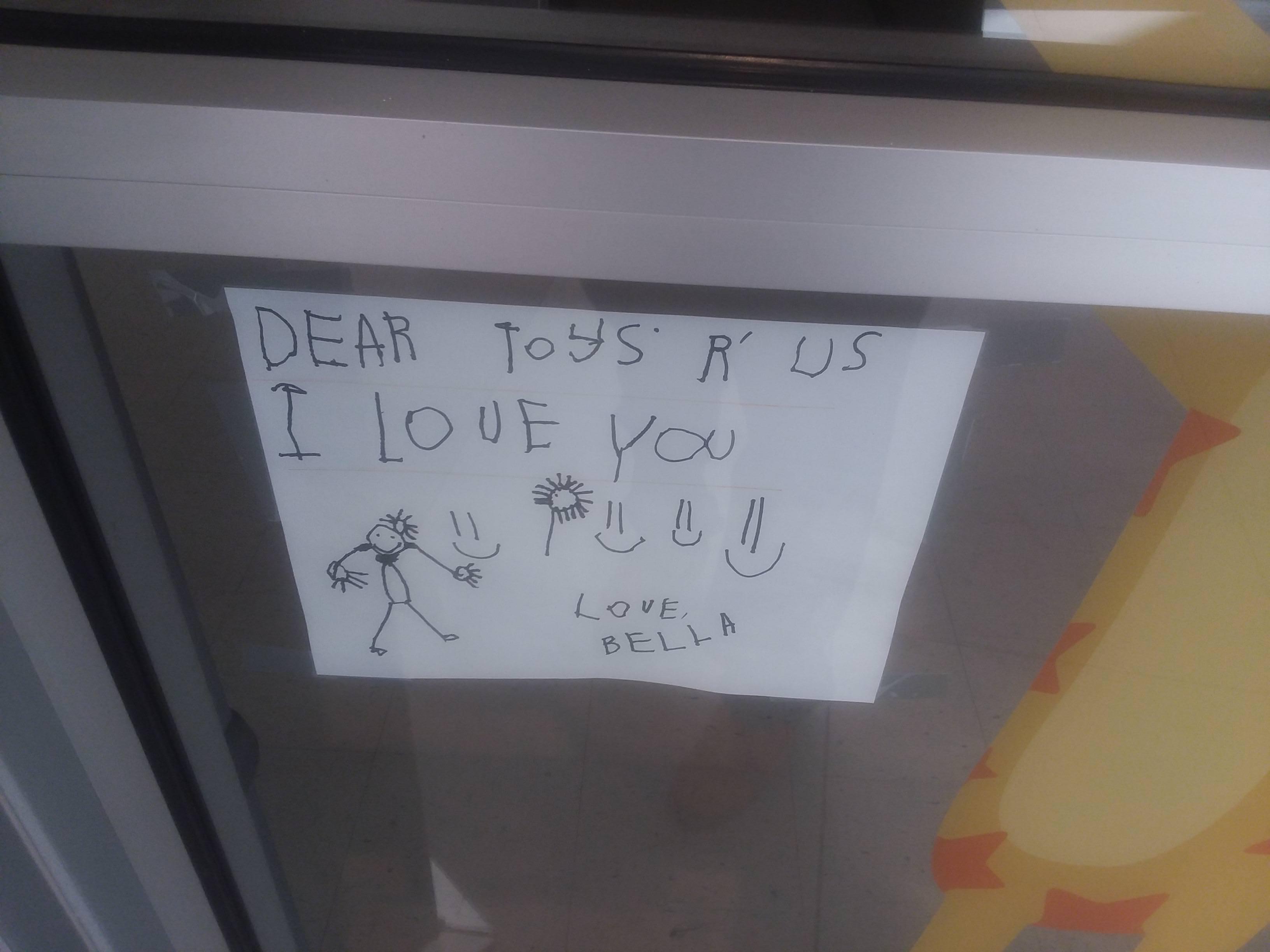 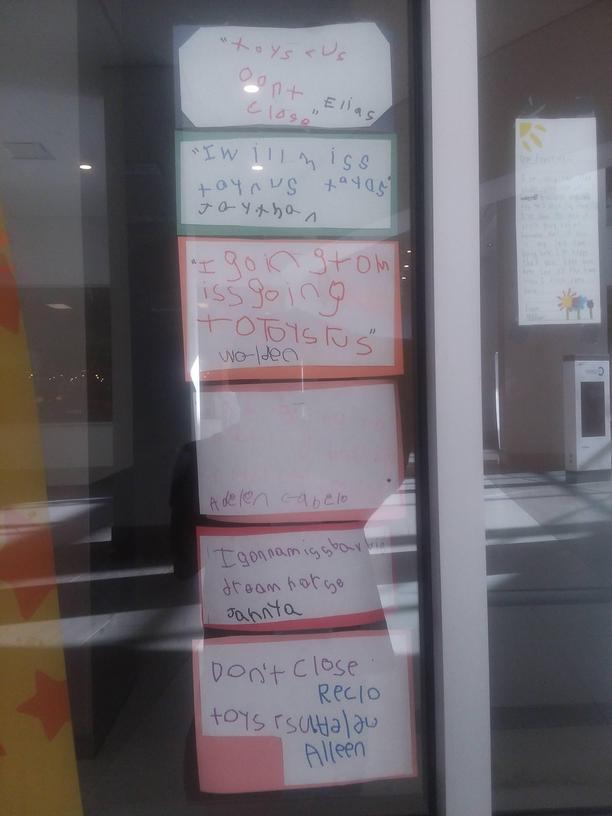 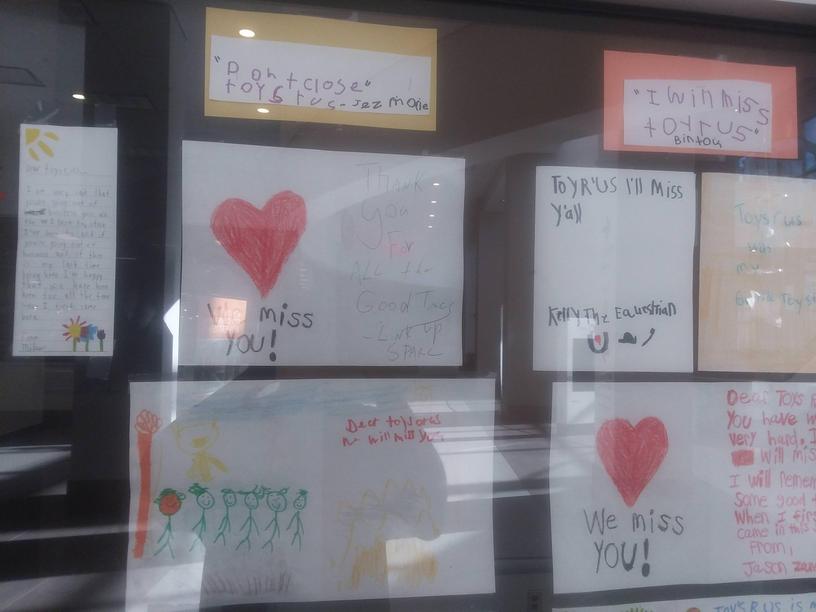 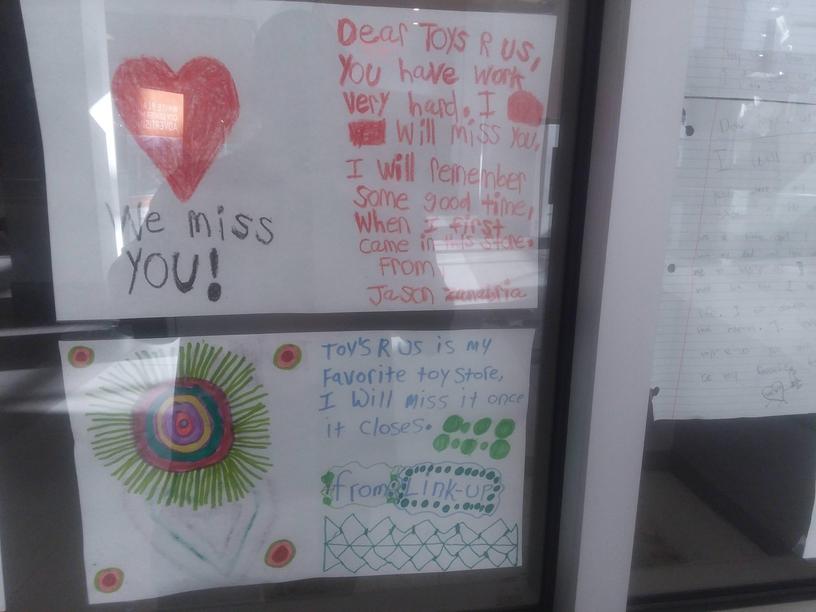 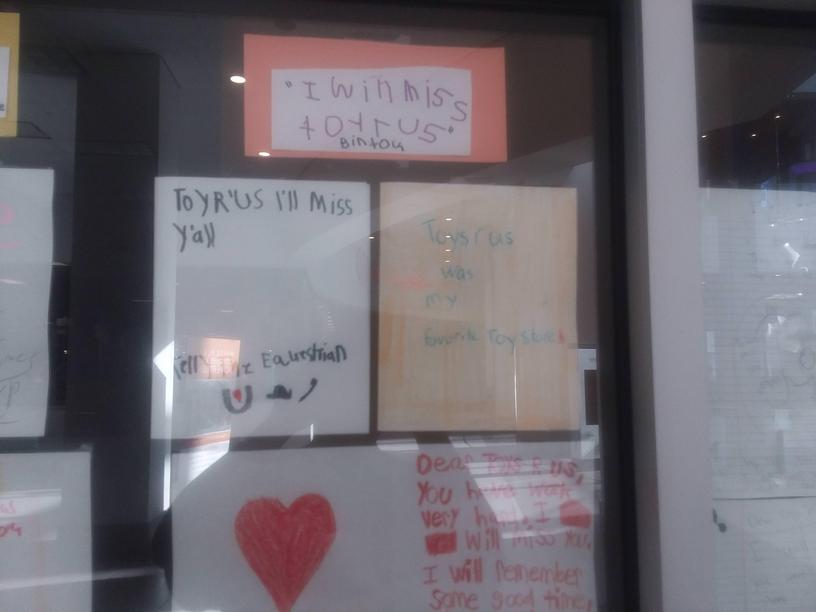 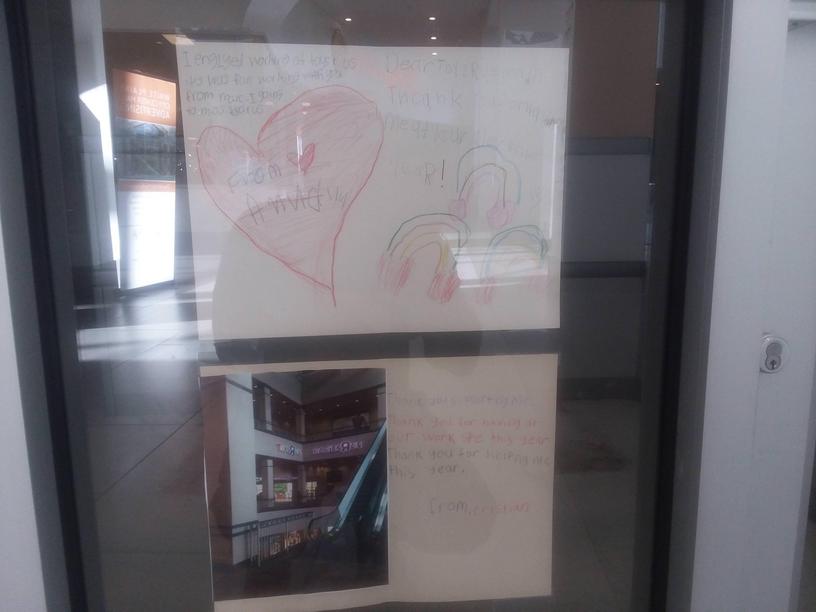 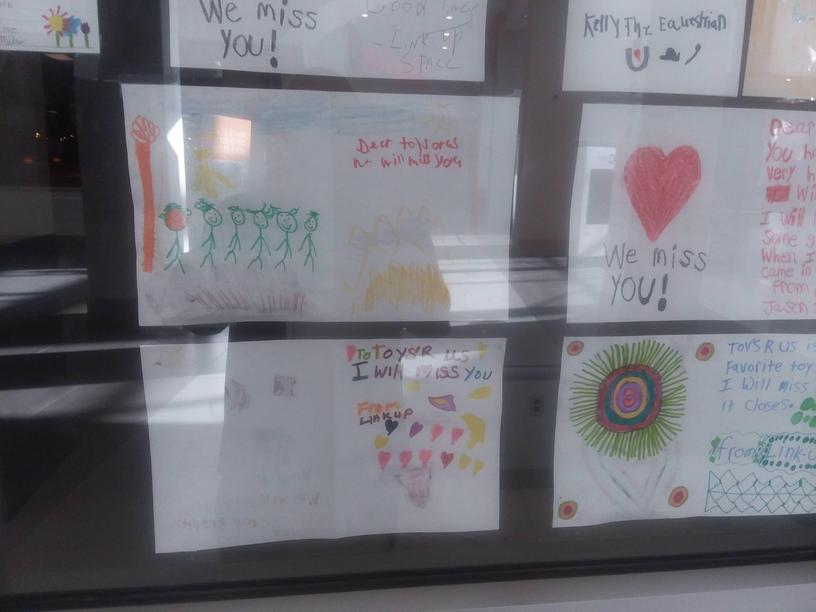 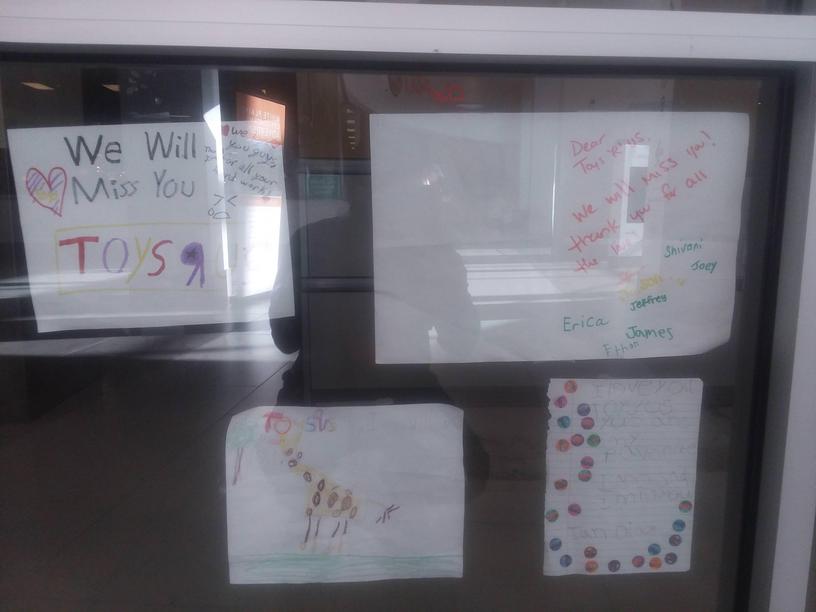 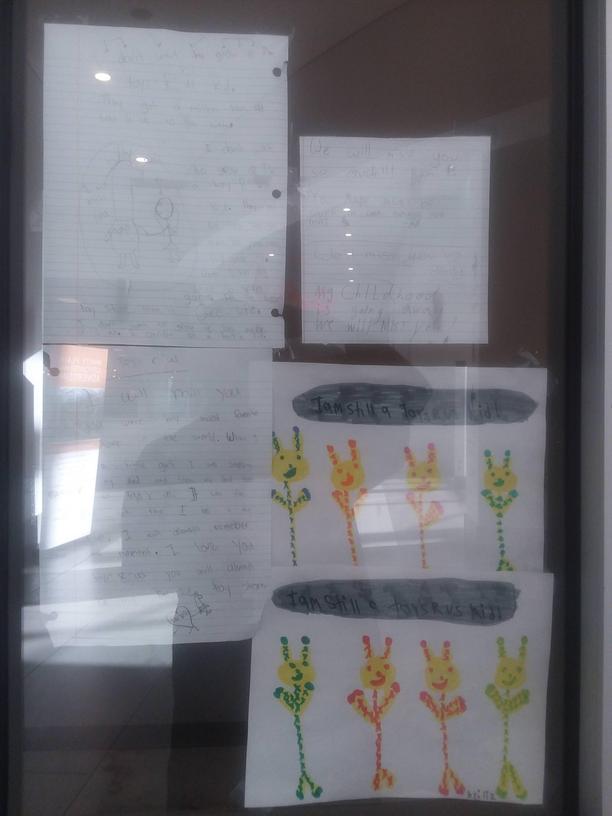 Earlier this week, the store at the Micronesia Mall in Guam shut down, two calendar days before the stores in the mainland and Puerto Rico.
https://www.guampdn.com/story/news/2018/06/26/guam-bids-goodbye-toys-r-us-up-90-off-toys/733251002/

I actually made a goodbye card with my characters on it for one of the store's employees I was very fond of. I'm getting a bit choked up seeing those kids' letters.

This Bubbles Puff-out plush was the last ever thing I purchased from a Toys R Us store.

superkeegan9100 said:
This Bubbles Puff-out plush was the last ever thing I purchased from a Toys R Us store.
View attachment 139081
Click to expand...

Nice. The last thing I got from them was a Mega Man amiibo, and that was in December of last year.

At least here in Canada TRU is sticking around... for now.

These were the last purchases I made back in March.

I got the Tempest Shadow plush on my last visit too. That's almost eerie. Also picked up Mojo Jojo when the store a few miles from me closed a few months ago. You and I got the exact same clearance plushies.

The store may be gone, but the mascot is put to better use.

Enter Joseph Malfitano. Malfitano is a liquidation expert who had been hired by Toys R Us to help with their painful process of closing up shop, which involved thousands of employees across the U.S. — at both the retail and corporate level — losing their jobs. Malfitano, who lives in Boulder, Colorado originally wanted to send Geoffrey to a children's hospital in Denver. That's because his own son was often treated there for type 1 diabetes. But the Colorado hospital could not accommodate Geoffrey's sheer size. [ . . . ]

Malfitano gave Toys R Us an undisclosed sum to take Geoffrey off their hands, have him packed up and shipped down to the children's hospital in New Brunswick. When Ken Rosen, chair of the bankruptcy department at law firm Lowenstein Sandler, heard that Geoffrey was on his way, he and his wife agreed to donate the final cost of Geoffrey's installation at the hospital. Rosen is also a board member at RWJBarnabas Health.
Click to expand...

Daikun said:
The store may be gone, but the mascot is put to better use.

So the giraffe is no longer unemployed, that's good to hear.

Wow, that's interesting!
Also, my Toys R Us is going to become a Wholesale Liquidators. I've heard many interesting things about that store from online threads (someone found Ninja Turtles party supplies from the 90s at one around 2013 or so!). However, my local store still has the sign up for Toys R Us.

When I listed "exclusive minifigures" among mementos I have to remember Toys 'R' Us by, I forgot to point out Rocket Raccoon in particular as a mainstay of my Lego Marvel/Disney character display. Even after the Guardians of the Galaxy, Vol. 2 line introduced a new Rocket, I keep that figure on display, instead, since it seems like the only Rocket minifigure I have with dual-molded legs.
I didn't mention him earlier because I bought him from a third-party online retailer, rather than Toys 'R' Us.
You must log in or register to reply here.

Allison Of Astra: Season One Talkback

15 Years of Phineas and Ferb Memories

RainbowCupcake
The internet explodes today...Get ready for the trailer of a lifetime.
42 minutes ago •••
G
Ghoster1987
today is the day of the Mario movie trailer
Today at 9:19 AM •••

Pooky
I know this is nerdy pedantry but it bug me when writers refer to cartoons that aired in Prime Time or Syndication as "Saturday Morning Cartoons". I don't expect the average person to know/care, but when you're writing an article or a video essay? Come on, you should get that right.
Today at 6:27 AM •••

jaylop97
Oh hey today is my 8th anniversary here, I regret sometimes not making my account sooner, since I knew about this place as early as 2012. Anyhow time sure flies.
Yesterday at 9:19 PM •••