Would Family Friendly DVD Movies Be In CGI? 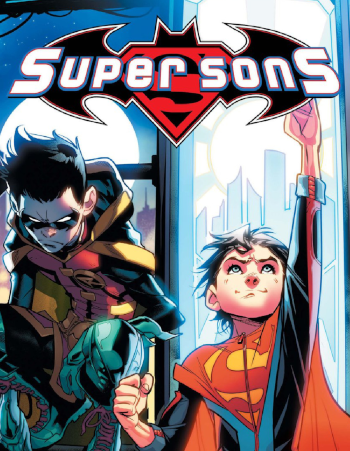 What do you call a team-up between the sons of DC's two most iconic superheroes?. World's Smallest? The Boy Wonder and the Boy of Steel? How about... The Super Sons! Super Sons is a monthly comic series that began on February 15th, 2017 after …

DC Graphic Novels for Kids, formerly known as DC Zoom, is a DC Comics imprint aiming at a younger audience. Similar to its sister imprint DC Ink, it publishes graphic novels instead of single issues and releases them both in comic book stores and …

When it was mentioned about the Super Sons getting adapted into a CGI DVD movie, my first thought was that it was going to be one of those PG-13 movies that are in the usual DVD lineup aimed at older audiences. However, I recently discovered that the comic is apparently from the DC Zoom/DC Comics Graphic Novels For Kids. This is something meant to be a gateway for younger audiences to be introduced to DC Comics. I actually own some of these graphic novels, mainly Primer and 2 graphic novels from the 2015 DC Superhero Girls, and they definitely have the vibe of mainly being lighthearted fare with some serious moments to help market them to young audiences. I've never read Super Sons, but I assume it's in a similar boat of being lighthearted enough to be family friendly yet still has some serious moments.

I bring this up mainly in regards to what the movie's target audience is. Is it a family friendly movie where it's mostly lighthearted but with some seriousness thrown in, or will it be more for the older audience of teenagers and adults? If it's something meant to be family friendly, will future family friendly DVD movies also be CGI? Would it be seen as an indicator of what's family friendly and what isn't in order to market the movie to a certain audience? While it's not a spoken rule in the television animation industry (and there can be some exceptions) , there does seem to be something that indicates how CGI animation is to help market to a younger audience while 2D animation is to help market to an older audience. Take for example Paramount Plus. The 2D content that debuted on there (like Star Trek Lower Decks and that 2D news show with Stephen Colbert or some other celebrity) are for older audiences while the Nickelodeon animated content that debuted there first is all in CGI (The SpongeBob Movie: Sponge On The Run, The Paw Patrol Movie, Kamp Koral, the Rugrats reboot, Star Trek Prodigy, and the upcoming Big Nate series). Would people still think of Star Trek Prodigy as a kids show if it was 2D instead of CGI? Similarly, when you look at Disney, outside of What If, the various Star Wars shows, Tron Uprising, and Monsters At Work, their CGI shows are usually for the Disney Junior audience while it's usually their older skewing shows that get to be 2D. Bringing the conversation back to DC, the only confirmed upcoming movie that is family friendly is the crossover between DC Superhero Girls 2019 and Teen Titans Go (and possibly that Scooby Doo/Krypto movie), which is 2D. After that, what else do we have that's 2D? Will family friendly movies be CGI? Sorry if this is long. What do you think?

I don't think that such movies, targeted at a younger demographic, need to exclusively be made in CGI. I'd like to see a hypothetical adaptation of Superman Smashes the Klan animated in a more traditional form but in the same style as the graphic novel.

I don't know, I remember seeing something about a idea of a multiverse superman movie in lines of spiderverse
T

I don't see a reason for family friendly DTV movies to be exclusively in CG.

I remember an interview from Giancarlo Volpe stating that CG animation is more expensive to produce than hand-drawn animation. Admittedly, this was in regards to GL:TAS, which is just a bit more than 10 years ago, so I don't know how much that idea applies now. I'd say with technology for CG animation constantly improving, the costs are either roughly the same or more expensive, but I'm going on a tangent.

The bottom line is that I don't think future movies for younger viewers need to be in CG. I'm pretty sure the marketing for traditionally animated movies would still look like lighthearted adventures, and I don't think a child would just latch onto something because it's in 3D. And I'm also not sure if something like Primer would even look good in CG, or at least lower-budget CG.
You must log in or register to reply here.
Share:
Facebook Twitter Reddit Pinterest Tumblr WhatsApp Email Share Link

CNC
smfh I live in a hellhole country with a rogue court right now ugggggggh
Today at 3:27 PM •••

SoundDestroyer
Hi guys, important update! After 3 (almost 4) months, I'm finally leaving Bulgaria! Tomorrow at 5AM morning, me with my mom and my aunt are heading back to Dnepr! Wish me safe journey!
Today at 10:14 AM •••

StrikersSeventyOG
I am gonna so very mad at WBD if MAO MAO GET FORGOTTEN AND DELETED because that mine last favorite show. I lost Rocketeer and Abby Hatcher (2019 batches) because of pandemic cancellation.
Today at 9:05 AM •••