Staff member
Moderator
Check out the latest news and discussions centered around the comedic adventures of the Teen Titans! This follow-up to the popular "Teen Titans" series takes a more comedic look at the superheroes, showing what life is like for the teens when their capes come off. Funny things happen to Robin, Starfire, Raven, Beast Boy and Cyborg between saving the world and being regular teens, living together without adult supervision. The teens, in their ordinary lives, deal with the everyday issues of adolescence that include such important things as having staring contests to determine who does the laundry and going on a series of quests to construct the perfect sandwich. But, of course, the heroes still fight crime in Jump City when the need arises. Whatever the situation, they're always ready for an adventure -- inside the house or out of it.
Click to expand...

When Cyborg starts to rage out, Starfire takes him to her secret garden in the backyard to relax.
Click to expand...

Yojimbo said:
When it was announced for a season 3 on February 19, 2015, they never said how many episodes total. But "Garage Sale" is the 21st episode of season 3. When we see the March schedule, we'll have implied confirmation this a 52 episode season like season 1 and 2 or if the series ends in February. I'm pretty sure it's the former unfortunately.
Click to expand...

I think there's enough hints that season 3 will be another 52 episode season.

2) Episode about Robin teaching other Titans about rental properties

3) Episode almost all in Pig Latin.

4) Wants to do episode where future Titans go back in time and tell present selves to save for retirement.

EDIT: Another episode was on the CN app by mistake, "The Cruel Giggling Ghoul"

It's basically a parody of "The New Scooby-Doo Movies" series with Lebron James as the celebrity guest. The Titans find Lebron at an amusement park haunted by a 2 headed ghost. Lebron even danced with the Titans in the opening title sequence.
Last edited: Jan 19, 2016

It looks like NBA superstar LeBron James will have a cameo:

dmxx116 said:
It looks like NBA superstar LeBron James will have a cameo:

So that's a total of 78 half-hours, which means there would actually be more episodes of this than of the original series. Wow.

2/11: As a programming note, so far based on promos on television, Teen Titans Go! will premiere one or two new episodes back to back on Monday February 15 at 6-6:30 pm eastern as part of the Valentine's Day event. We're still awaiting word from PR if there's two or one but the names of the episodes appear to be "How Bout Some Support" and "Pyramid Scheme." The logline for "How Bout..." is

It's Valentine's Day and Cyborg goes to great lengths to make it special for his girlfriend Jinx.
Click to expand...

So they are doing another Cyborg / Jinx episode which is fine with me, but are they ever to going to use Kid Flash as a love rival for Cyborg, I am have been waiting for that, it writes itself.

When are they going to use Wonder Girl? She was officially designed for the original series' tie-in comic, so there's no excuse. 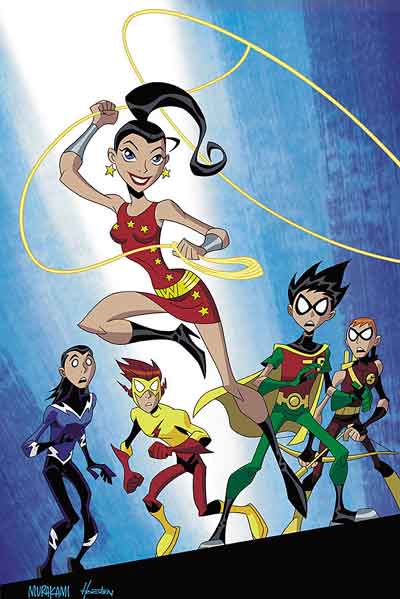 Staff member
Moderator
Someone should ask them that at the next convention since I don't think Jelenic or Horvath are on social media?

Yojimbo said:
Someone should ask them that at the next convention since I don't think Jelenic or Horvath are on social media?
Click to expand...

I would be happy to, but since I live in the UK I won't be able to; would someone be willing to ask the crew about Donna Troy on my behalf please, as Yojimbo has suggested?

Staff member
Moderator
So far there are two new episodes in March.

Thursday March 17 at 6:00 pm will be "Beast Boy's St. Patrick's Day Luck and it's Bad"
and
Friday March 25 time slot to be announced will be "The Teen Titans Go! Easter Holiday Classic"

Woof, two of the longest episode titles ever. The first one sounds potentially hilarious.

Staff member
Moderator
The DC Entertainment YouTube channel has a clip from "Beast Boy’s St. Patrick’s Day Luck and it’s Bad” and a short feature with Michael Jelenic and Aaron Horvath about their writing process for the show.

I'm not the least bit surprised on what the producers said about the writing process.

3/8: According to the March premiere thread in CN section, there will be another new episode, on Monday March 28 titled "Batman vs. Teen Titans: Dark Injustice" -- so probably a parody of Batman v Superman: Dawn of Justice...

Staff member
Moderator
As long as they don't pull the same trick they did with Slade and have the fight take place off-screen...

Personally, I hope we'll hear Batman laugh again, like he did in "The Cruel Giggling Ghoul".

Teen Titans Go! Screening and Q&A
Day: March 25
Where: Room 408AB
When: 6:00 – 7:00 p.m.
Why go to just any old panel at WonderCon 2016 when you can GO! to the liveliest and most fun panel of the weekend! Warner Bros. Animation welcomes you to join producers Michael Jelenic and Aaron Horvath, along with voice actors Greg Cipes, Khary Payton,Scott Menville, Tara Strong and Hynden Walch, as they screen an all-new episode and answer your biggest questions on what’s in store for Robin, Beast Boy, Cyborg, Raven and Starfire.
F

I haven't been keeping up with this show in a while, but from what I've seen there's still a good amount of haters. I used to believe the show had a Love it or Hate it following, but lately it feels like it's tilting more towards the hate side, at least when it comes to internet communities.

Although I haven't watched any newer episodes, I do like Teen Titans Go. The humor, although hit or miss, is almost always creative. The writers come up with the most unusual jokes that I can't help but smile. That's something that I have to give it credit for, since many comedy cartoons nowadays come up with jokes that are too cliche and overused. Johnny Test used to take as many time slots as TTG did, but the humor in Johnny Test was so cliched and bland that I much rather have TTG take up the slots.

The thing that worries me is that since I haven't watched the show in a while, the quality of the newer episodes could really have gone down, and that's whats possibly contributing the extra amount haters. Can those who are still keeping up with the show confirm this?

“#137 - The Teen Titans Go Easter Holiday Classic”
Friday, March 25th, 2016 at 6pm (ET) on Cartoon Network
The Easter Bunny is missing, and it's up to the Titans to find him before Easter is ruined.

19MagiswordLane
Gotta say, I'm warming up to the new layout. It's a little more attractive than the old one.
Yesterday at 9:52 PM •••