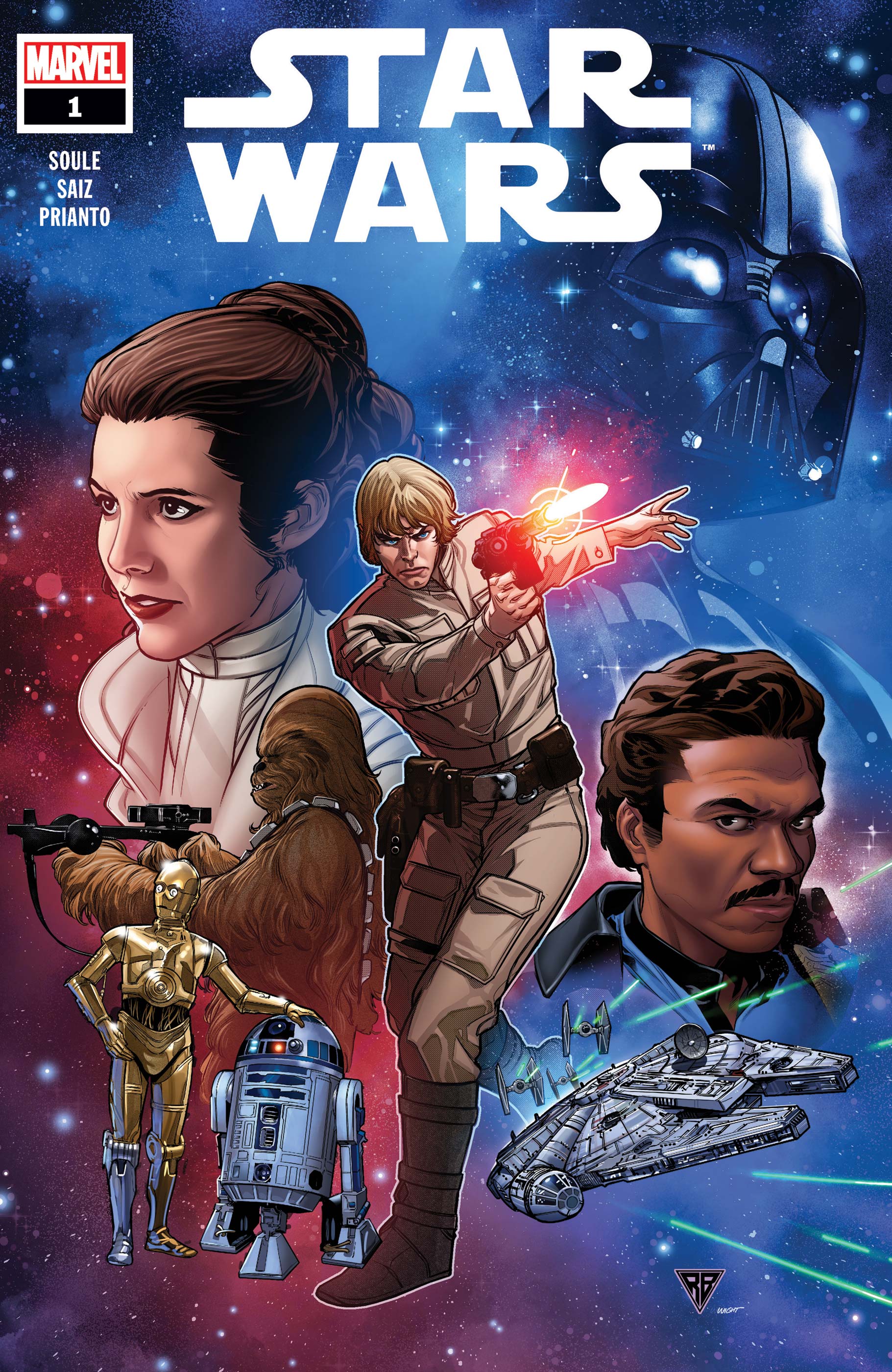 In the wake of the events following The Empire Strikes Back, it is a dark time for the heroes of the Rebellion. The Rebel fleet - scattered following a disastrous defeat at the Battle of Hoth. Han Solo - lost to the bounty hunter, Boba Fett, after being frozen in carbonite. And after being lured into a trap on Cloud City and bested in a vicious lightsaber duel against the evil Darth Vader, Luke Skywalker - learned the horrible truth about his past. Vader did not kill Luke’s father Anakin--Vader is Luke’s father! Now, after narrowly escaping the dark lord’s clutches, and wounded and reeling from the revelation, Luke, Princess Leia, Lando Calrissian, the Wookiee Chewbacca and the droids C-3PO and R2-D2 must fight their way back to the Rebel Alliance—for the fate of the entire galaxy is at stake! After so many losses is victory still possible? But, what Leia, Luke and their ragtag band of freedom fighters do not realize is that they have only traded one Imperial trap for another! Enter the cunning and vengeful Imperial Commander Zahra, at the helm of the Tarkin’s Will! Writer Charles Soule and artist Jesus Saiz are taking us all to the galaxy far, far away!

Discuss the this new era for the Star Wars comic series right here!

Staff member
Moderator
I do like the potential so far in exploring Luke reeling from the battle and revelation from Vader and how Lando earns his keep between Empire and Return.

Yojimbo said:
I do like the potential so far in exploring Luke reeling from the battle and revelation from Vader and how Lando earns his keep between Empire and Return.
Click to expand...

The book is only three issues in but so far it's been exactly what I've been looking for. It's refreshing after the last Star Wars series sort of lost steam after issue #50 or so. It's great to be exploring the time between Episodes 5 and 6, especially when it comes to Luke. Hopefully we'll see more of his training and him dealing with finding out Vader is his father. Soule has been a great thing for the Star Wars comics and I hope he sticks around. The artwork in the comic has been great too and I hope Marvel is able to keep this creative team on board for the long haul and not change things up arc to arc.

Makes sense Lando wanted to look for his friend Lobot and Leia wanted to study the carbonite process once they landed in Cloud City. Figures Luke would be stuck with a needle in a haystack situation when he arrived look for his lightsaber in the smelting chamber. The last page, cripes, they froze Leia in carbonite!

One of the best surprises of this book is how much we're seeing of Lando and Cloud City. Also that we get to see Luke and Leia deal with some big things, both Han being frozen and Luke learning who Darth Vader is. It's pretty cool to see them trying to deal with these big bombshells while. They really picked a good artist for this new book too. I am enjoying Suiz's work though I wish they kept Phil Noto around. Soule has been doing a really great job on his Star Wars comics so far and this book is no exception. I hope they keep him around for awhile.

Loved seeing the gears churning in Lando's head that maybe he could be a rebel. The adulation from being heroic may be the motivator, but still.

Laughed at the jab at the Stormtroopers. Taken out by the mouse droids. lmao.

Interesting that they seem to be setting up Luke moving on and making his new lightsaber from having a vision, reconnecting with the Force, and deciding not to pursue the lost one anymore. Nice touch with Yoda seemingly reaching out to him and telling him he doesn't need it -- unless that was from Empire and I totally forgot that one line.

Wonder if the woman is Maz or some new character.
Last edited: Aug 7, 2020

Yojimbo said:
Wonder if the woman is Maz or some new character.
Click to expand...

Given that Maz helped Leia with her disguise for Episode 6, it was in a Forces of Destiny short I think, that's who I am expecting it to be, too. This is the first time we've had comics explore this timeframe right?

Spider-Man said:
Given that Maz helped Leia with her disguise for Episode 6, it was in a Forces of Destiny short I think, that's who I am expecting it to be, too. This is the first time we've had comics explore this timeframe right?
Click to expand...

Interesting! I believe so, they've been advertising that it's the 1st time.

Nice to have this series back.

So no Maz. Turns out to be a character named Verla from a Darth Vader comic. Not to mention Darth references Vendaxa which comes into play in the current (I think) Vader comic where he encounteres one of Padme's handmaidens. And Verla tells Luke about Order 66 and the Inquisitors. Oops, probes his mind and finds out he's Anakin's son. Quick decision to drown a dude. heh.
Last edited: Aug 7, 2020

Guess the Grand Inquisitor got an even crueler fate. Stuck as a ghost guarding an old Jedi outpost - and outpost that's yet another not-very-subtle High Republic tie-in.

Loved that last shot of Luke using his yellow lightsaber to restore some hope.

What a great first arc! I've been waiting until all the new Star Wars books finish their first arcs before commenting further given the low discussion levels here and so far each of them have been excellent. The main Star Wars book did get a bit listless toward the end but by moving the book to between Episodes V and VI its really given the book a boost. I also really like how the lightsaber Luke gets in the last issue to hold him over until he builds his own is based on the yellow lightsaber Kenner released after A New Hope way back when. And issue #6 really wrapped up the arc nicely and dropped in some neat surprises. It was cool to see the Inquisitor there and what Vader did to him feels especially cruel. I also found Verla to be a really interesting character with a neat perception on the Force and it was cool to see some references to the High Republic. I liked that this arc was character oriented and pretty self-contained and it has my interest to keep me sound for the next arc. And I love that splash page at the end.

Staff member
Moderator
#7 Will of Tarkin

Finally, the reveal of Zahra's grudge. She was Tarkin's protege and she's fixated on Leia for her quest to avenge his death.

And cue shoe horning her into scenes - Rogue One when he meets with Krennic, when Han is interrogated, Vader refers to her as a foundling - a term from Mandolorian, and during New Hope she was sent to go after Burniium Ro, a warlord who is using the old rhetoric of the Nihil, who are villains set to debut in the High Republic comic, Grail City from a Poe Dameron comic then just as she goes awol to prove herself, the Death Star is blown up.
Last edited: Oct 11, 2020
You must log in or register to reply here.

Saturday at 6:03 AM
Yojimbo