Interesting. I haven't seen very much of NLT so that's news to me.
P

Classic Speedy said:
Interesting. I haven't seen very much of NLT so that's news to me.
Click to expand...

Even The Looney Tunes Shows done something different with Pepé Le Pew making him a french waiter.

powerjake said:
In the cartoon New Looney Tunes/Wabbit, Pepé Le Pew is like a secret agent that teamed up with a fox woman named Claudette Dupri. People were fine with the character in that show.
Click to expand...

Yeah, the whole secret agent context is a clever modernization.
B

I’m rarely if ever on these forums, but I’m really upset by the revelation that the characters will be CGI for all but 20 minutes of their screen time. I tried to write out my thoughts about this on Reddit, so I’ll copy and paste that here since my thoughts on this topic get too convoluted:

I won’t lie, when the first look photos were revealed my heart sank a bit and was about to turn me off from seeing the film.

What is this insistence on eradicating traditional 2D animation from theatrical films? Space Jam was my introduction to the Looney Tunes, and those beautiful animated shorts became a major part of my life growing up, and still are to this day. And obviously one of the most breathtaking parts of these shorts was the gorgeous, hand drawn animation. One of the few things that made the first Space Jam worthwhile was the unbelievably well done and beautiful hand drawn animation. There was no reason to switch to CGI for this and I really don’t give a shit how “good” it looks. Warner Bros, despite all the redesigns and strange revivals and occasional CGI attempts, had been doing a good job keeping their main use of the LT property hand drawn. To falter on this project was unexpected and a massive let down.

Everybody was expecting this to be an exciting return to not just having our 2D Looney Tunes back on the big screen, but for 2D animation to be back on the big screen in general. And for some reason I thought and trusted that Warner Bros had the foresight to know that nobody wanted to see the Looney Tunes done in any fashion other than 2D, and there’d likely be huge backlash to having them any other way especially with the first film looking the way it did (although shockingly and disappointingly the proper outrage is yet to be seen), but of course they went the disappointing route with the boring and consistently uninteresting CGI.

...THAT SAID: I was relieved to learn from the Twitter page of Tony Bancroft that there IS, in fact, 2D animation in the film. There’s only 20 minutes of it...but it IS there...thank GOD. So I’ll still see it just to see the 20 minutes of what will most definitely be gorgeous traditional animation, and see the gang the way they’re supposed to be. But this CGI crap better not have any influence on future projects.

Thank God for the HBO Max “Looney Tunes Cartoons” series which, with their gorgeous 2D designs and animation, are beautiful and capture the essence of the original shorts in a fantastic way. 2D, hand drawn animation truly is dying out and I’ll never understand how or why and it absolutely breaks my damn heart.

I later followed up with:

I definitely don’t actually “hate” CGI and it’s an entirely valid form of animation. But I just don’t find it impressive neither in process or visually by comparison to everything required by good hand drawn animation, such as the original shorts. And Looney Tunes shouldn’t be in CGI. Like...it’s literally ingrained in the brand and in the public consciousness that these characters are to be hand drawn, nothing outside of that has ever worked and they aren’t designed to look good in CGI

Also...like that Bugs reveal looks nice. I admit it. But it looks like someone online with a lot of digital rendering skills took a still of Bugs Bunny from a hand drawn short, made an exact copy CGI rendering of it, and that was the result. That’s not a made for CGI Bugs, that’s a 3D model based off of something that was supposed to be-and would only look right in-2D traditional animation.
And I do not for a SECOND believe they made them CGI for a majority of their screen time for artistic reasons or some big exciting change, it was because they’re trying to make it appeal to this supposed mindset that exists that 2D isn’t as sellable as CGI—or it was just easier. Like I don’t believe I’m wrong in saying one of the things people were hopeful for and expecting from this was for it to be hand drawn like the first.

Idk. I’m just disappointed. It isn’t Looney Tunes if it’s CGI to me. Even the revivals like The Looney Tunes Show and New Looney Tunes, even with the redesigns and my disinterest in watching the latter, I’m not bothered by because at the very least they stayed true to the tradition of keeping it 2D

8 posters of Space Jam: A New Legacy is released!

Well, look who's coming back:

God this is frustrating. They’re only 2D for 20 minutes in the film. Why are they using their 2D models for these posters if a majority of the film they’re going to be CGI??? I hate this bait and switch garbage they’re doing. They got my hopes up with the original images before the EW first look was published which dashed my hopes for the full movie, and now they’re back to this? This is ridiculous, misleading, and confusing.

A teaser for the upcoming trailer that will be posted on Saturday.

RoyalRubble said:
A teaser for the upcoming trailer that will be posted on Saturday.

Wile E Coyote was sacrificed for this teaser trailer .

Here is the trailer.

SweetShop209 said:
Here is the trailer.

Thats like Warner Bros version of Ralph Breaks the Interenet with sports thrown in.

The first one to post this Trailer in this topic happens to look like the 3D Granny at 2:25.

Not like the plot of the original Space Jam movie was that great but the whole "oh you have to win this basketball game to save your son" feels pretty... lame. I guess they want to side step that the plot of the original was about slavery (like they mention that quite a few times in the first movie and it ends with Michael Jordan making a deal with the main baddie there for all the toons to be left alone if he wins but if he loses he becomes a slave which man so many terrible implications they probably didn't realize at the time) and again in the movie this could be framed better but outside of the "what in the matrix hell" the first half of this was pretty lame. I admit once LeBrone got animated this picked up. I am glad they did show in the trailer the toon's 2D look and yeah getting a CG look but at least it makes sense in the "we're going more in the real world so this helps them fit in as a part of that aesthetic" and it still mostly looks like the toons. And the Daffy Duck getting shot by Yosemtie Sam with the ball was good (though seriously if it's okay for Sam to have guns in this movie how come he can't in the actual new cartoons? Hyprocacy much guys?) and even the Granny joke which should of been a klunker was fine so yeah I'm still in for seeing this. It does look like the emotional connection especially when the wife says "you have to win this game to save our son" is pretty lame but there will be good jokes and yeah this world looks pretty cool with the references. Unlike Ready Player One too as this is more a comedy they can make more jokes about it but I get saving that more for the film and letting this one bask in the visual splendor in it some.

Decent trailer, interesting that the Tune world is 2D but I think that’s a plot point.

Did notice a fair few cameos like Lion-O and Cheetara from ThunderCats and the various HB characters although they seem to be reusing the CG models from Scoob
Last edited: Apr 3, 2021

Interesting that they're going for an ensemble of characters from across all of Warner Bros., not just Looney Tunes. I hope this means Cartoon Network and Adult Swim characters make cameos (CN/AS had been under WB's jurisdiction since 2019)

SweetShop209 said:
Here is the trailer.

I remember when Michael Jordan was still in live-action when he went into the Looney Tunes world, but Lebron is turned cartoon when he is. Not a bad look, though .

I love how Lebron wants an all-star cast of WB properties and...he ends up with just the Looney Tunes

Goon Squad does not seem as memorable as the MonStars

The original Space Jam website is still there along with the new layout (click the logo on the top right and hit "continue"). 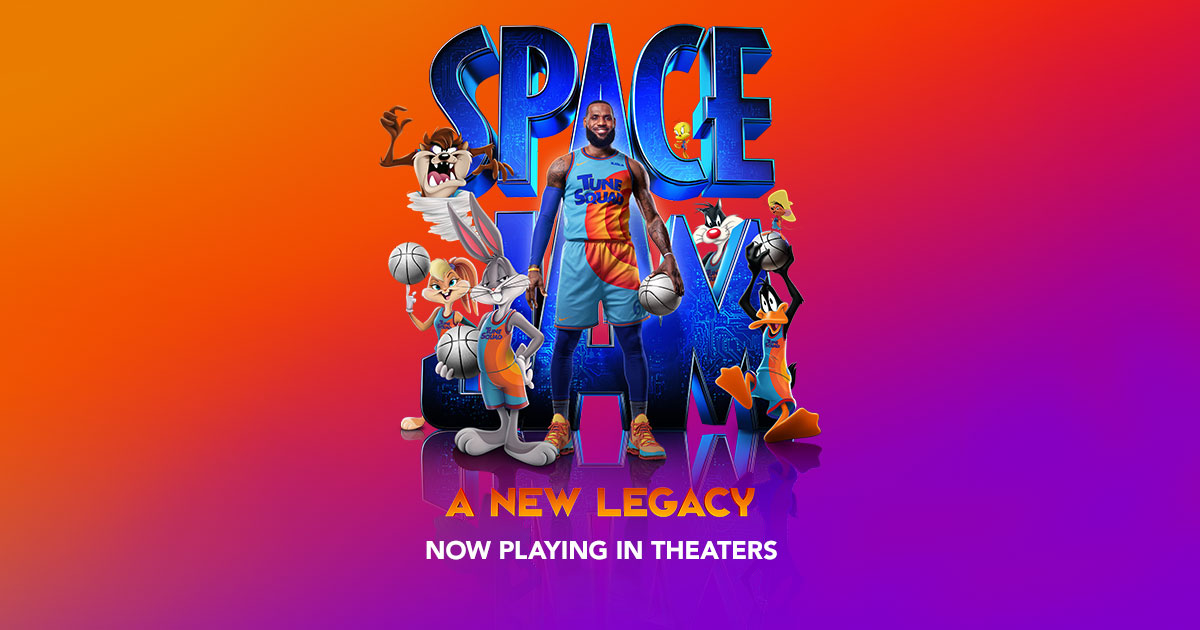 19MagiswordLane said:
The original Space Jam website is still there along with the new layout (click the logo on the top right and hit "continue").

Did notice that when LeBron go through the Wizard of Oz world, he went from colour to sepia which is a nice touch. Will be interesting if they visit these various worlds, I wouldn't be surprised if they have some of these IPs appear but turning down Lebron or perhaps Al-G sabotaging anyone wanting to play so the Looney Tunes have to be used.

The Goon Squad being original creations make me think that
They're creations of LeBron's son as he's sat on the bench with them and Al-G is using it to his advantage
You must log in or register to reply here.

KristofLaszlo99
TV2 Comedy is almost 1 year old this year!
Ibid: Tomorrow is the day on which Humor + was replaced by TV2 Comedy 1 year ago.
Today at 5:03 AM •••