WarnerMedia has announced a new Superman animated series, which already has a two season commitment. Continue below for more.

HBO Max and Cartoon Network announced today a two-season series order for My Adventures with Superman an all-new kids and family animated series following the action-packed, comedic and romantic adventures of Superman and Lois Lane. Produced by Warner Bros. Animation (WBA) and based on characters from DC, My Adventures with Superman catches up with twenty-somethings Clark Kent, the bright and driven Lois Lane, and their best friend Jimmy Olsen as they begin to discover who they are and everything they can accomplish together as an investigative reporting team at the Daily Planet. The news was announced today by Amy Friedman, Head of Kids & Family Programming, Warner Bros.

“Superman has remained one of the most iconic and beloved Super Heroes in the world,” said Amy Friedman, Head of Kids & Family Programming, Warner Bros. “This fresh take from the Warner Bros. Animation team delivers a modern, relatable Clark Kent alongside a fearless, whip smart Lois Lane who are navigating the small tasks of both becoming adults and trying to save the world.”

In this serialized coming-of-age story, we follow Clark as he builds his secret Superman identity and embraces his role as the hero of Metropolis – and perhaps the world. Lois, now growing into a star investigative journalist, takes aspiring photographer Jimmy Olsen under her wing. All the while, Clark and Lois are falling in love, sharing adventures, taking down bad guys, stumbling over secrets, and discovering what it means to be Superman and Lois Lane. Jack Quaid (The Boys) and Alice Lee (Zoey’s Extraordinary Playlist) lead the voice cast as Clark Kent and Lois Lane, respectively.
Click to expand...

Complete press details are available at The World's Finest.

A new Superman series is being made for Cartoon Network and HBO Max called My Adventures With Superman. The show is produced by Jake Wyatt, Brendan Clogher, and Josie Campbell. It has a 2 season pick up. 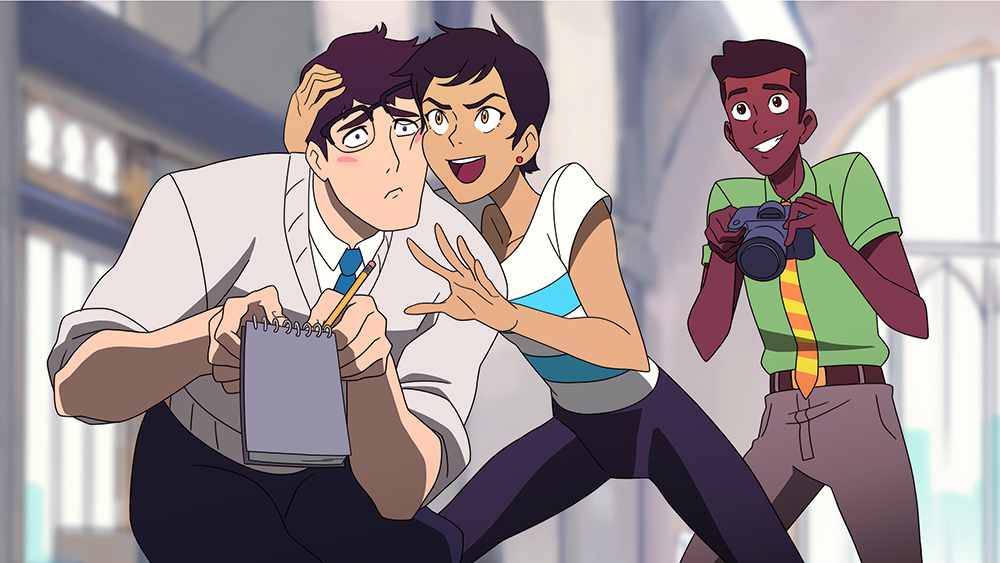 My Adventures with Superman, with Jack Quaid lending his voice to the titular hero, has landed a two-season order at HBO Max and Cartoon Network. Produced by Warner Bros. Animation and based on cha…
deadline.com

To note, the first post in this thread has been updated with press details.

I'm more excited for this than Batman: Caped Crusader.

Finally, a new Superman animated series. (Now if we could get one for Wonder Woman...).

The premise sound decent and the art style looks pretty good. It's cool to see it already has 2 seasons announced since I think there's a lot more one can do with Superman in animation that hasn't already happened, unlike with Batman.

I doubt this is supposed to be in the same continuity as Batman: Caped Crusader, but having the two in their own shows at the same time reminds me of the early days of the DCAU.
P

How do I know I can trust Warner Bros with making the My Adventures with Superman, is it going to look like King of Atlantis. What took them so long to make a brand new animated series for the iconic Man of Steel?.

A new Superman cartoon! Yes! And with a such a refreshing and cute take .

The art style looks pretty cute and anime-esque, and I like the premise of a young up-and-coming Superman coming into his own while developing his relationship with Lois and Metropolis .

I'm guessing Lois is Asian? That looks like a more convincing black Jimmy than the Supergirl version .

powerjake said:
How do I know I can trust Warner Bros with making the My Adventures with Superman, is it going to look like King of Atlantis. What took them so long to make a brand new animated series for the iconic Man of Steel?.
Click to expand...

You know, you could actually read the articles posted.
P

So is that the picture of it?. Why does it give me that She-Ra netflix reboot feeling in its artstyle?.

Is it me or Lois looks like Luz from The Owl House?
C

Looks like this will definitely be more "fun" and kid-oriented, but that's not a bad thing. Not sure how I feel about Lois with such short hair though.

powerjake said:
So is that the picture of it?. Why does it give me that She-Ra netflix reboot feeling in its artstyle?.

Josie Campbell, one of the producers for the series, has worked on both a DC cartoon (Justice League Action) and She Ra And The Princesses Of Power.
P

SweetShop209 said:
Josie Campbell, one of the producers for the series, has worked on both a DC cartoon (Justice League Action) and She Ra And The Princesses Of Power.
Click to expand...

Not really impressed with it, that fake gimmick anime look. you can tell it would be a try hard comedy.

Superman should of got a better animated series than this.

There are two things to wonder here:

1. How many episodes are in each season?

2. How long are the episodes?

RoyalRubble said:
I doubt this is supposed to be in the same continuity as Batman: Caped Crusader, but having the two in their own shows at the same time reminds me of the early days of the DCAU.
Click to expand...

Takes me back to the mid-late 2000s when last we saw a Superman-related cartoon (LoSH) be made alongside a Batman-centric cartoon (The Batman). It is rather interesting that the two shows are seemingly going that far back-basics between the Noir Detective Batman and the American Alien Superman.

I'm fine with the art style so long as the actual animation is crisp and fluid, but I'm generally fine with anime-esque art styles .

But yeah, short hair Lois always takes a minute for me to adjust too...

I like the look of this show. Visually, it reminds me a little of Gurihiru's charming art style in Superman Smashes the Klan.

Oh god, why can't they stop trying to make Jack Quaid a thing... he wasn't even the right kind of "ineffectual man" to play Wee Huey.

I'm not familiar with Jack Quaid, but I liked his voice roles, such as Richie Rich in Harvey Girls Forever. He could make a good Superman.
You must log in or register to reply here.

WF Editorial: In the Shadow of the Bat - Remembering "Superman: The Animated Series"

The winner of this matchup is Happy Birthday Scooby Doo, which got 3 votes. A Scooby Doo Valentine got 0 votes. The next matchup is Birthday For A Princess. It's between "Surprise" from Cleopatra In Space and "The Birthday Cruise" from Elena Of Avalor.
Today at 6:00 AM •••

Mostezli
After the animated movie announcement, did not at all think a live-action TMNT was still in development.
Yesterday at 10:23 PM •••

CNC
Thinking about rebranding myself sometime later this year. Like, changing my screen name, new accounts, etc. But I don't think my haters would trust me if I did. Would those people build confidence if I considered doing it? Like, I WAS gonna do it soon, but I probably need to hold off for a long while.
Yesterday at 9:19 PM •••

EdCNPowerpuffDrama
I like how there's drama on twitter almost every single day. Feels like people only use that site to complain, get offended and get into arguments nowadays.
Yesterday at 4:28 PM •••