Like millions of Disney fans around the world Russell Schroeder spent his childhood dreaming about becoming a Disney artist. Through hard work he made that dream come true, eventually becoming a resident artist at Walt Disney World and then a Creative Director at Disney Land. Now, looking back on his 29-year career with the company Schroeder reflects on Walt Disney's lasting impact on family entertainment in a new book, DISNEY: THE ULTIMATE VISUAL GUIDE.

<img src="https://www.toonzone.net/news/images/2002-08/disneyvisualguide.jpg" width="123" alt="Image" hspace="5" vspace="3" height="192" align="right"> In DISNEY: THE ULTIMATE VISUAL GUIDE Schroeder details the most celebrated moments in Disney history. Beginning with Walt Disney's birth just over 100 years ago, this book features a full-color, decade-by-decade look at the development of Disney masterpieces and new ventures alike. Fans will delight in seeing their favorite Disney characters alongside fascinating facts and behind-the-scenes images of early cartoon sketches, from the first full features like Snow White and the Seven Dwarfs and Fantasia to recent hits like Toy Story and Lilo and Stitch.

"Editorially, we have tried to include some aspects that have not been stressed before, as well as finding visuals, that have not been previously published," says Russell Schroeder. Featuring over 800 images from the exclusive Disney archives, Schroeder proclaims, "This book will hold some new things for even the die-hard Disney fan and collector." Among the exclusive artwork are some early sketches of everyone's favorite Disney character, Mickey Mouse.

Enduring for more than a century, the mission of Walt Disney-to bring laughter and joy to families-continues to win the hearts of each generation. As Dave Smith, Archives Director of the Walt Disney Company, explains, "Almost everyone has grown up with Disney in their lives, whether through a visit to a local movie theater, sitting down to view the Disney Channel, going to sleep clutching a stuffed Dumbo or going on a family vacation to Walt Disney World. This book will help all those millions of people relive some of those cherished memories." DISNEY: THE ULTIMATE VISUAL GUIDE is available wherever books are sold.

SweetShop209
And the winner is "The Grim Adventures Of The KND" which got 3 votes. "Modern Primitives" got nothing. The next matchup is between "Sky Pirates In The Sky" and "Quack Pack" .

SoundDestroyer
Who is the most yellow-est fella that lives under the sea? Today SpongeBob and his VA Tom Kenny are celebrating Birthday! What a coincidence!
And yes, SpongeBob was born on July 14,1986, exactly 34 years ago!
Today at 1:02 AM •••

CNC
This week, Universal Kids will be celebrating the nationwide launch of parent company NBCUniversal's new streaming service - Peacock - by airing a 24-hour marathon of the now-Peacock Original: Where's Waldo? Plus a themed weekend marathon of different shows they've aired in the past and present. 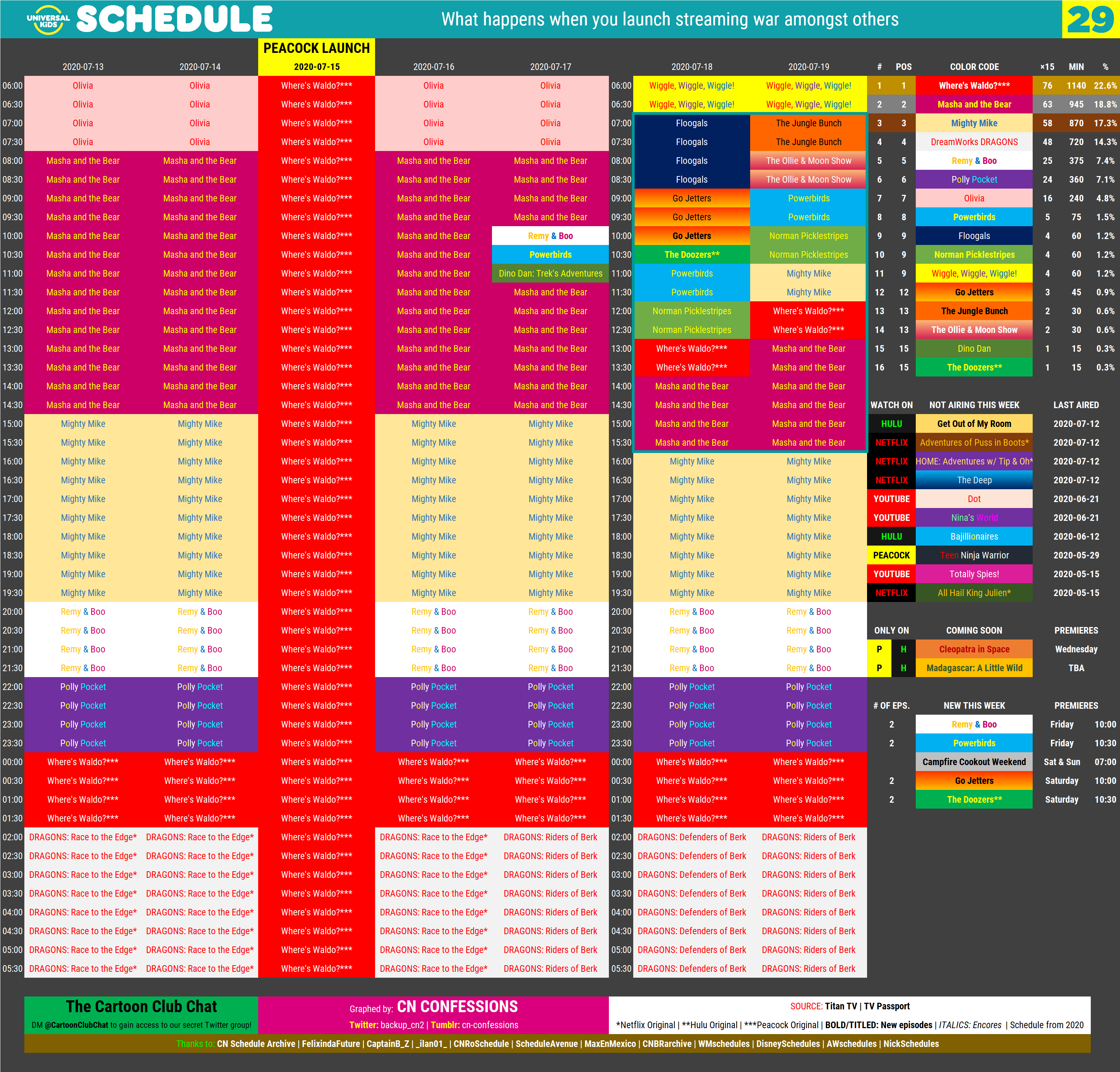 5YearsOnEastCoast
Somebody on Twitter makes a picture on Steven Universe being a loser and compares it to other show -> the tweet gets over 10000 likes.
Yesterday at 4:07 PM •••
Top Bottom