This 2D animated movie from Sergios Pablos, creator of Despicable Me and Smallfoot, has been in development for quite some time. Like, as far back as 2015!


But now Netflix is helping to bring it to fruition, first in theaters and then onto the service shortly after!

And now we have an official trailer!

This looks fantastic! It feels like a lot of heart was put into it.
Reactions: Frontier, Spacething7474, Red Arrow and 1 other person
T

And now we got a poster! 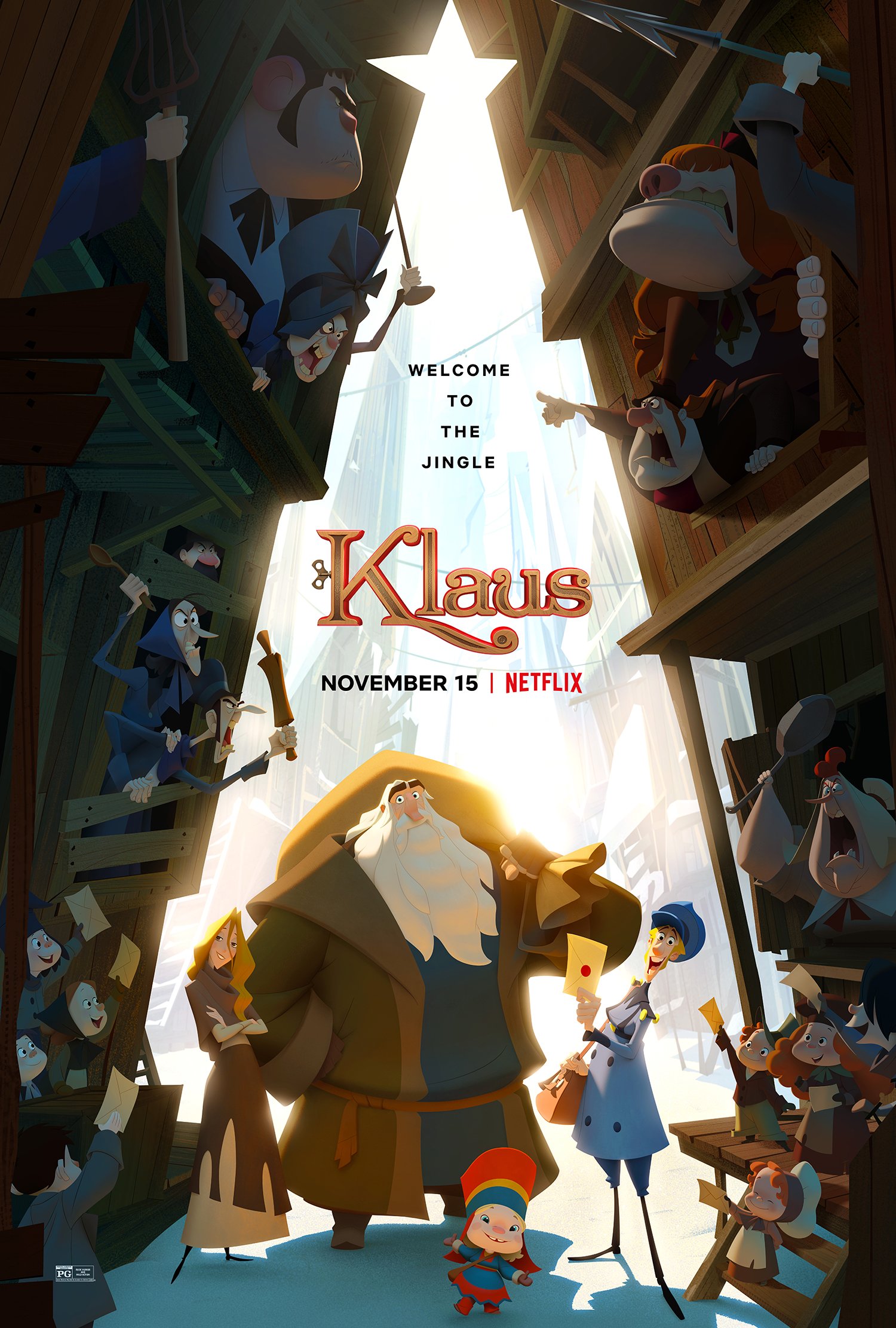 Loved everything about that trailer except for the song choice. Panic! at the Disco doesn't really go with the setting or time period.
Last edited: Oct 9, 2019
Reactions: Red Arrow
T

ICYMI: Klaus will be appearing on Netflix this Friday! Spread the buzz!

RainbowCupcake said:
Loved everything about that trailer except for the song choice. Panic! at the Disco doesn't really go with the setting or time period.
Click to expand...

PATD's style of alternative(?) rock just doesn't mesh super well with something as timeless-looking as Klaus.

Well, it's not the only film to have included songs not fitting with the setting or time period, after all and it's not always a bad thing IMO but I respect your opinion.
Reactions: RainbowCupcake

Finished it on Sunday. I liked it, but not as much as I thought I would. I almost feel guilty for not absolutely adoring it since everyone seems to be treating it as if it's the best thing that's ever come to Netflix.

At first, I couldn't pinpoint exactly why I didn't love it, but after contemplating it for a while, I think it had to be the antagonists. As characters, they were really fun, but their "evil scheme" wasn't all that threatening once it came to fruition.
All they wanted to do was destroy the toys so that the town would remain miserable and they could continue their centuries-long fight. Kind of a lame goal, in my opinion. I do appreciate that the film didn't try and reform them at the end, though. That would have made it worse.
I also thought the plot was ridden with tropes. This isn't always a bad thing (hey, this is why Hallmark Movies are so beloved), but for something that took this long to produce, I expected a little more creativity.
Really, many things were predictable, like Jesper and Alva falling in love, having it be revealed that Klaus lost his wife, Jesper being revealed as a liar in a climactic scene, then everyone forgiving him soon after, etc. Even some of the characters felt like cookie-cutter models. Jesper was basically a glorified Kuzco, and the Krum and Ellingboe families mirrored the Montagues and Capulets or the Hatfields and the McCoys. Once again, formulaic plots aren't necessarily bad, and they do appear quite often in holiday movies, but I felt like the story was too cliche in certain ways.

Additionally, I wish I could have understood what the Sami people were saying. I was told there would be subtitles in English, but they never showed up on Netflix.

A final negative thought, the ending was completely contrived. So Klaus just walks into the magic wind and disappears forever to be with his wife? I get that it was supposed to be symbolic, but instead, it was completely random.
Alight, that's enough bad. Let's get to the good.

The animation was STUNNING. I absolutely loved every second of it. Not only was it unique, but it actually looked good, which was what mattered. I feel like sometimes when animators go for a fresh new style, it can end up appearing ugly and jarring, but not here. I thought the lighting was especially well done.

My favorite character was probably Klaus. There definitely was some emotional depth to him. J.K. Simmons was a good choice. Really, every character was well-casted. No voice stuck out like a sore thumb.

Would I watch Klaus again one day? Probably, but I wouldn't go running back into it with open arms. I think I set my expectations too high for this film (which I often do) and I suppose that's ultimately what caused me to have the certain gripes I listed above. I still believe it's a solid movie overall and I would recommend it to any animation fan.

I've just borrowed my mom's Netflix account to see Klaus.. I watched it last night and I love it! I am so glad it's in 2D animation, even if it's in a 3d look. And it looked almost like Disney's Paperman short. The story of the origin of Santa Claus was phenomenal. The animation reminds me of a Hercules, The Emporer's New Groove, or Treasure Planet vibe type of it. I love the part where one of those deluded leaders of the feud showed the kid "The Great Mooning of 86." You know what I mean of mooning. Yikes! Jesper is funny postman. He almost reminded me of Kuzco. I like his "Thank you, Dad" so many times. It also has a good moral to it about goodwill. I hope it gets an Oscar nomination and win for Best Animated Feature. Frozen and Toy Story already had their own awards. I just wish Disney should see this and realize how wrong they were about 2d animation, even though it was in theaters for limited time before they head to Netflix. But, since Jennifer Lee says she's open for a return of hand drawn animation, maybe there's a chance. In the meantime, I enjoy that holiday movie. I'm not getting a Netflix account, but I'm so glad I got to see that movie and enjoyed it. Let the 2d animation revival begin!
Reactions: Radiant97 and ShadowBeast

Just watched it, and I loved it. The only negative thing I saw was how predictable the scene where Klaus and the others discovering Jesper's motives, but even that had a bit of a covering with Jesper and Klaus's earlier conversation of "Everyone doing something to get something" which left it open of Klaus possibly knowing that Jesper had a motive for why he was doing what he was doing.
There were scenes where I had to hold back tears, even near the beginning of the film because this had so much heart in it. Most of the characters were fun and enjoyable. Jesper has a Kuzco-vibe to him, I think he represents the elves that work for Santa, Mogens the ferryman was funny in almost every scene he was in, I like how Alva regained her will to teach as the film progressed, I also like how Klaus started with a green suit before wearing red as that was what Santa wore before the red suit came. I loved how Klaus was big and intimidating and yet, a very nice guy(I loved how he got the reindeer to pull the sleigh), I also like how the antagonist were defeated with the truce causing the leaders' children to fall in love in an ironic twist and thus forcing them to keep the truce.
The way Klaus left the world was beautifully done and I liked how is was implied he did become a magical being that delivers toys all around the world in the end.
This is definitely one of the best films of the year.
Reactions: Frontier, Radiant97 and RainbowCupcake

Klaus has been viewed in 30 million households worldwide. 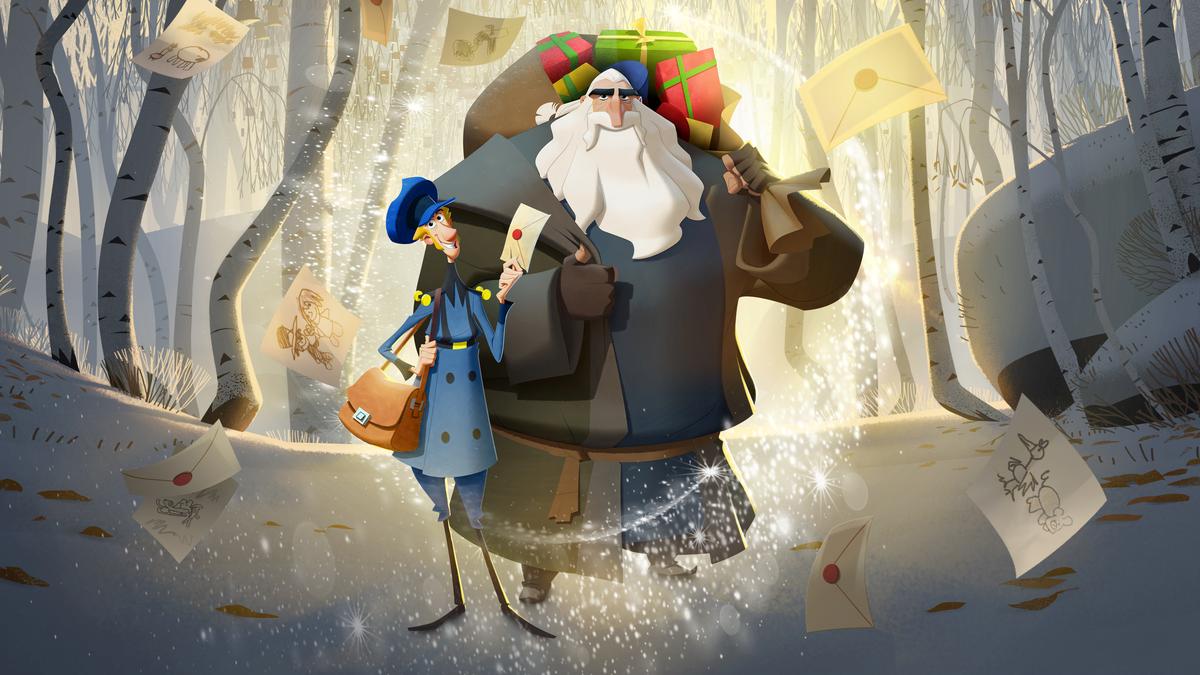 Netflix Inc's animated holiday movie "Klaus" has been watched in ...

This was the best animated film I've seen this year. The plot was original, it had beautiful artwork, and it was a fresh take on the Santa mythos. They even had the guts to
have Santa "die" at the end, sort of
, which I was not expecting, but in retrospect it made sense given the scenes that came before it and I wouldn't have it any other way. The highlight? Margu, that Saami girl who is adorable in every scene she's in.


ShadowBeast said:
The only negative thing I saw was how predictable the scene where Klaus and the others discovering Jesper's motives, but even that had a bit of a covering with Jesper and Klaus's earlier conversation of "Everyone doing something to get something" which left it open of Klaus possibly knowing that Jesper had a motive for why he was doing what he was doing.
Click to expand...

I would agree with that, but I've seen it executed a lot worse. Plus by that point the movie had generated enough goodwill in me that it didn't drag things down too much.
Reactions: ShadowBeast and Frontier

SweetShop209
Greg Page, the original performer for the Yellow Wiggle from The Wiggles, underwent cardiac arrest. He's thankfully okay, but he needs time to recover.

Dantheman
No animated shows on Fox tonight. Instead, ARE YOU READY FOR SOME FOOTBALL?
Yesterday at 5:07 PM •••