Is "Space Ghost: Coast to Coast" forgotten in CN nostalgia?

I saw this article today and it made for a good nostalgia trip: 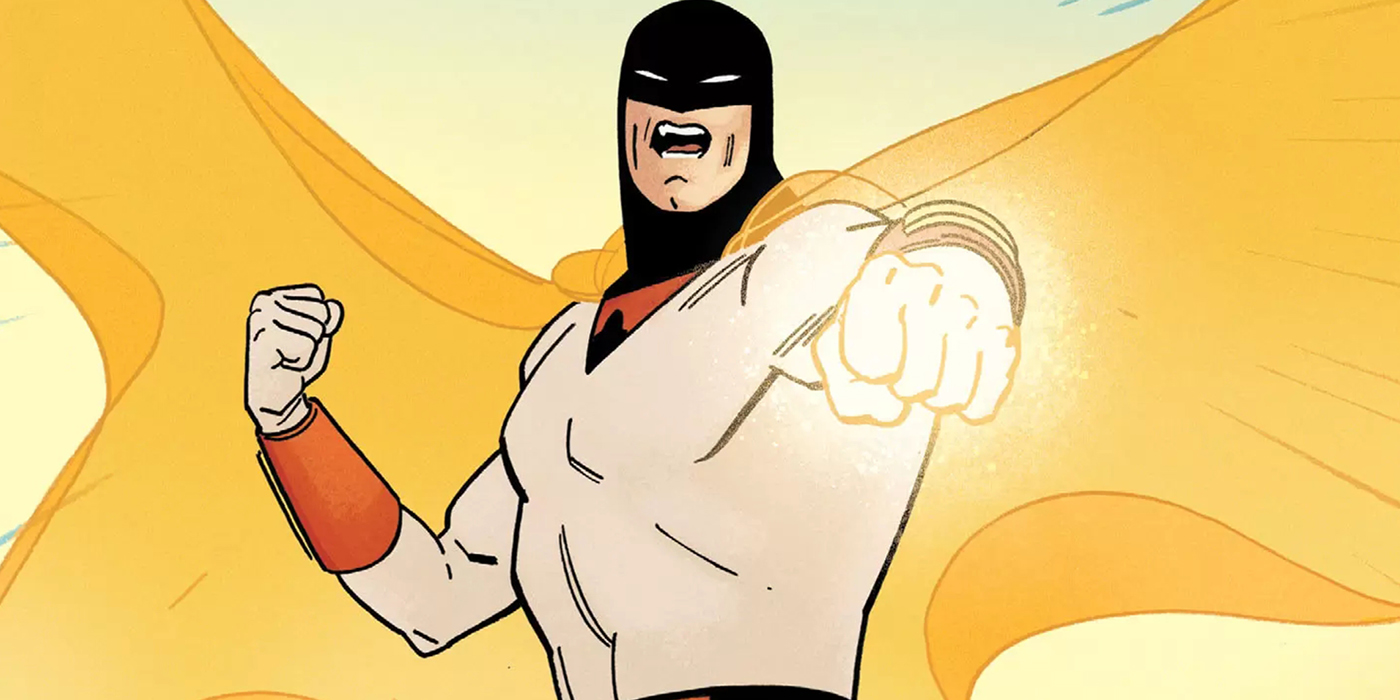 For a socially uninterested 15-year-old, a typical Friday night was Talk Soup (John Henson was the host; my sister Hilary and I fought over who he was going to marry. Please don’t tell Moltar.) followed by Cartoon Planet and then Space Ghost Coast to Coast, then up in the morning for MST3K. Like many TV shows of that era, it created a fan base that felt exclusive; quotes became a code for being a nerd-in-the-know.

Space Ghost was weird for the sake of being weird, but unlike later adult animation like Family Guy, it was never cruel or crude. It could be enjoyed by kids as much as their parents, finding its sweet spot among the late teens-early 20s college set for which it served as a sort of secret club. If you missed it, there was no YouTube to find it on, and it would be years before you might swap downloads on Limewire or Kaaza, instead taping the odd episode on a blank VHS to show to friends who hadn’t yet discovered the glories. You had your favorite episodes and ones you wouldn’t see until the DVD release.

That's a pretty good analysis of the way it was in the late 90's (if you were a geek in college - Cartoon Network at night, Mystery Science Theater 3000 on the Sci-Fi Channel on Saturday mornings...and then this little thing called "anime" and "Toonami" took off in popularity).

So I got to thinking it over some more, and I've come up with an explanation as to why Dexter's Lab is remembered as the "first" Cartoon Network original....at some point, "Space Ghost: Coast to Coast" became known as the first "Adult Swim" cartoon. Even though it was a product of the 90's, and "Adult Swim" started in 2001. Does that sound correct?

Pretty much. Space Ghost's influence runs through pretty much all the early Adult Swim originals.

I can only speak for myself, but I don’t think about Space Coast because I didn’t really see it much. To me it’s more like a proto-AS show, rather than CN.

It only aired here in 1999 when CN was pay-tv. It didn't air at all in many other countries. I think that's also a reason as to why it's forgotten.

The lack of SGC2C getting CN nostalgia is the product of almost two decades of Turner deliberately positioning it solely as an AS show, which is helped by the content of the AS seasons of the show.

The older the show gets, the more it will be forgotten.

Corwin Haught said:
The lack of SGC2C getting CN nostalgia is the product of almost two decades of Turner deliberately positioning it solely as an AS show, which is helped by the content of the AS seasons of the show.
Click to expand...

I wonder if that's what will happen eventually with Samurai Jack, as time goes on...

wonderfly said:
I wonder if that's what will happen eventually with Samurai Jack, as time goes on...
Click to expand...

Wouldn't be surprised if it did. Considering that the show can never air on CN ever again, people will start associating it with Adult Swim more the longer it stays on the block.

Samurai Jack was only on Adult Swim / Toonami for a very short time compared to its time on CN... I think it has been longer on Boomerang than on Adult Swim.

Ditto for Space Ghost but it's spent most of its lifetime as an AS show (including after its original run). Granted, Sam Jack was a CN show for much, much longer than Space Ghost.

Staff member
Moderator
Reporter
If you really want to get technical, the first CN original was The Moxy Show, debuting a few months before SGC2C.

The especially tragic thing is that if you think about it Space Ghost Coast To Coast may be the most important show that Cartoon Network has ever made. You have to remember that initially when Cartoon Network first began it didn't really have the money to produce ANY original new show content whatsoever. What set it apart besides the variety of various different classic cartoons were the pretty cheap interestials and bumpers that gave the fledging network the smidgen of an identity but not really any other claim to fame. Thus why the first series you could even call an "original production" wasn't even really a series it was the incredibly you kind of would of had to be there to even know about it's existence Moxy and Flea show. Which really isn't a series as much as it is slightly longer form interstitials with incredibly crude and primitive CG models interspaced with more classic cartoons. There wasn't really a story to these just jokes. The first honestly true actually 11 minute length actual full series (which hey considering 11 minutes are considered full series now on Cartoon Network especially that's fitting to say) with actual plot and characters that had some sembalance of a story to them was Space Ghost Coast to Coast. Granted SGC2C was mostly recycled animation intermixed with life action guests that were at the time either a fan of the oddball material or pretty C-D tier level guests for a talk show but it was the first series to really spark any sort of major fan interest. Thus in 1995 to start the second season of the show Cartoon Network did the World Premiere Toon in episode. And what's so important about that you may ask? Well see before the What a Cartoon Show, Cartoon Network used this episode to play clips of various shorts from that which were pilots for potential series. So yeah Space Ghost Coast To Coast was the first series where you ever saw clips of Dexter's Laboratory, Cow and Chicken, Johnny Bravo and even The Powerpuff Girls before they debuted on What a Cartoon and their own shows. And as Cartoon Network got more funding and were able to make and acquire new shows Space Ghost was still seen as one of their popular brands that they intermixed with a lot of their content as you can see plenty of SG characters in various promos and special event shorts and commercials all through the late 90s. And of course it was Moltar from SGC2C who first hosted Toonami using now more updated CG modeling used in the 1997 Space Ghost Season to launch that block that yeah 20 years later is still going. Don't forget too that it was shows like Space Ghost that proved adults watch Cartoon Network which is what helped get funding and create Adult Swim. Heck one of the interestials Space Ghost was a part of Stayongers a Survivor parody ended with Space Ghost thinking of the idea of making a "reality cartoon" series years before Total Drama Island was a thing and heck the Total Drama brand is also still around today on Cartoon Network.

So yeah Space Ghost is really important for CN despite the fact it has been forgotten by the network. In addition to it now being more associated with Adult Swim it's also generally associated with an older cartoon show and though I'm sure CN still has the rights to space ghost it's clear CN programming doesn't want kids thinking of such older programming now on their channel despite how it was older programming and twisted it in new ways that made CN the network that became popular enough to still run today. But you know CN especially now isn't good at really recollecting their history if the best example we have of it in the last like 10 years is one episode of OK KO.

wonderfly said:
I wonder if that's what will happen eventually with Samurai Jack, as time goes on...
Click to expand...

I know that Space Ghost Coast to Coast used to air on Cartoon Network proper as well, but I don't recall it being associated with the channel for that long by comparison. It's style and humor were more like the building blocks for Adult Swim rather than anything that aired on the channel at the time.

Echoing others, Space Ghost was one of the shows that pre-dated Adult Swim as far as Cartoon Network's nighttime/mature offerings go. It's also important to keep in mind that during this period, Cartoon Network wasn't a channel strictly for Kids, rather a channel geared towards kids and adults who enjoy Cartoons, which explains why it was so different from anything on the channel at the time.

A change in management at the channel, and the creation of Adult Swim, was what distanced the show from CN. Now its filed away as an AS original rather than a CN original.

Staff member
Moderator
Does CN acknowledge its past that much? It doesn't seem like its C2C in particular so much as CN rarely pays tribute to its history at all.

Classic Speedy said:
If you really want to get technical, the first CN original was The Moxy Show, debuting a few months before SGC2C.
Click to expand...

Is this how an episode of the Moxy Show was like?


Edit: At 6:56. This is another example that debunks the whole fact that there was never any form of live-action on CN whether it was mixed with animation or fully live-action before the Re-Animated movie came out.

Leviathan said:
Does CN acknowledge its past that much? It doesn't seem like its C2C in particular so much as CN rarely pays tribute to its history at all.
Click to expand...

Cartoon Network seems to prefer to acknowledge properties that are directly in their control such as the original Cartoon Cartoons. The reason Space Ghost is largely ignored by the network is because as I mentioned before, it's been filed away as an AS show rather than a CN one.

Radical Edward said:
Wouldn't be surprised if it did. Considering that the show can never air on CN ever again, people will start associating it with Adult Swim more the longer it stays on the block.
Click to expand...

Leviathan said:
Does CN acknowledge its past that much? It doesn't seem like its C2C in particular so much as CN rarely pays tribute to its history at all.
Click to expand...

There was a 25th anniversary bumper two years ago, but no it doesn't.
You must log in or register to reply here.

What was the real reason Space Ghost wasn't in the 2012 version of Cartoon Planet?

Low Spark of Lyman
R.I.P. Marge Champion, who was the model for Disney's Snow White.
Yesterday at 11:47 PM •••

SweetShop209
I love how she shows a fangirl side here.

JakobTV
Remember when I said The Dog and Pony Show should come to Qubo? Well, it's probably not happening. Since Discovery is a co producer it will probably end up on Discovery Family and Discovery Famiila.
Saturday at 9:36 PM •••
Top