I don’t even know how will Nick India be in 10 years. Probably more localisation of the channel. Which is bad news for neighbour countries

Maybe they might have changed it to Colors Kids or Kids18, if that happened replacing Nickelodeon itself, even Indians should complain.

This would probably imply Sonic dropping the Nickelodeon brand and Nick Jr. shutting down in India.
A

The press release sounds like Viacom18 is a very successful business but if you watch the Nick Jr. channel, all you see is disappointment. Why did they even remove most of their shows back in December? Why is the show library of Nickelodeon network so limited? Lot of questions remain unanswered about their kids business.

My solution, which seems unlikely:
The Indian government should find a loophole similar to Turner and Sony to "detach" Viacom India from Network18. MTV, MTV Beats, VH1 and the Nick channels are sold off to the "new" Viacom India. On the other hand, Sonic keeps with Network18 and might eventually rename itself.

As for the Anubis thing... I don't gert it. I mean yeah, English is a cool language, but showing most of the time this language (and with subs) and not the local language only results in the culture of the country getting weaker and weaker (see also: Greece), and blah blah blah...


animegamer said:
The press release sounds like Viacom18 is a very successful business but if you watch the Nick Jr. channel, all you see is disappointment. Why did they even remove most of their shows back in December? Why is the show library of Nickelodeon network so limited? Lot of questions remain unanswered about their kids business.
Click to expand...

Here's an idea BTW: Why the heck not changing the channel's name already?? I mean, is Viacom lazy enough to give its properties to people that the the only thing they take advantage of is the brand, and not its actual SHOWS????

Oh, and I love how in an interview with the president of the network, she doesn't try the least bit to hide how power hungry she is. "I want to increase ratings, I want to".... well, she doesn't say anything else!
Last edited: Jan 31, 2018

Can't wait to see how Portugal will deal with it (dubbing and the name) and I'm 100% sure that the old series won't repeat.
A 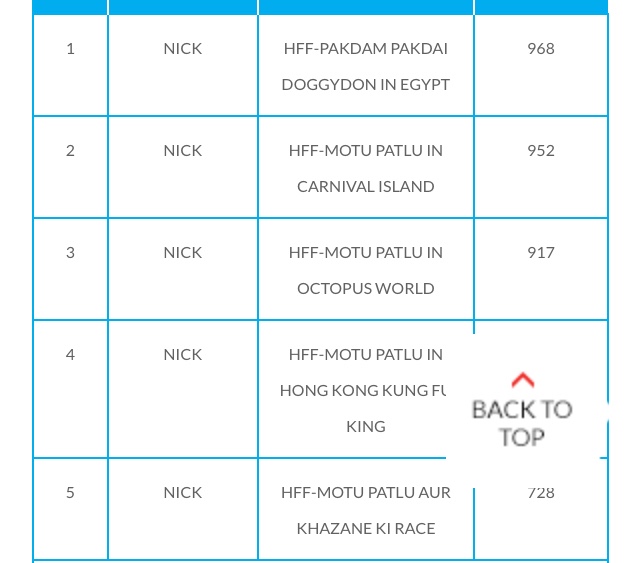 @Nick Mick there is hardly any schedule change on Nick India. The schedule has been nearly the same for the past 5 months.

At least Nick Iberia does a lot of schedule changes - mostly unexpectedly.

http://www.afaqs.com/interviews/index.html?id=553_There-is-no-non-prime-time-rate-in-my-channel-Nina-Elavia-Jaipuria said:
Kids love to watch the same thing over and over again, they love to hear the same story again and again. It gives them a sense of comfort, where they don't need to discover something new, they like to feel that they know it all. That is why; a lot of kids' content has a very high shelf life.
Click to expand...

What the heck?? So yeah folks, you need NOTHING NEW t to discover anything new in your life, because you already, know it all.

The problem is, they only do this for Motu Patlu.

Even Sony Yay, a kids channel that replaced Animax focusing on local cartoons started doing this based on viewership feedback.

Anyway, I guess there's no real-life or television event of SpongeBob Hold in India, right?
A

No. They did do a Dora event few years ago though.

Unfortunately they can't sort that thing out properly. They should air the Indian shows on channel.
A

Nick India just posted this on their Facebook page!!


Are they planning to air this? If they do they have to show it on the SD channel. It's in desperate need of new content.

Derana in Sri Lanka is airing the MvA series, weird since the only Nickelodeon series to have a Sinhala dub are all the shows they made with DreamWorks and TMNT 2012.

Nick added to FlixTV in Czech Republic. Probably the last provider to not have it.
https://www.parabola.cz/clanky/6302/flix-tv-zaradila-detsky-kanal-nickelodeon/

In Portugal it's on NOS and Nowo. MEO and Vodafone still don't have it.

Has anybody watched Sunny Day? I saw a promo on Nick Greece, and it looks way too modern (in fact, I don't think there's even a plot...).

Yesterday at 11:21 AM
Checkerboard

G
Ghoster1987
Finishing up Metroid Dread by acquiring everything only to be disappointed when the last energy tank and missile you needed an Amiibo.
23 minutes ago •••