^ Nick India, learn something from them.
A

3 out of the 4 options are from their own shows, since Nick India is flooded with Indian shows compared to the other networks.

Shiva also airs on Derana. What I saw today wasn't either Motu Patlu or Gattu Battu.

If RTP 2 aired the show, it would have another dub, kind of like what happened with Ricky Sprocket back in 2009.
A

Of course, in fact in another dimension where Viacom18 as a joint-venture never existed, Nick India would almost be a clone of Nick SEA.

Another example of lies.exe ate Viacom18?
A

This means that the premiere of WttW on the linear feed is upon us.
A

Is it me or does the part where the announcer says "The boy genius is at it again" sounds like he has an American accent, but at the next sentence his accent beings to show?

EDIT: Nickelodeon is launching on Nowo, for the first time the channel is available in more than one provider. I hope that the Portuguese feed will launch soon, we're getting tired of sharing feeds.
A

Another promo from Nick PK.

National, 23rd November, 2017: The No. 1 Kid’s channel, Nickelodeon is all set to kick off the awards season with the most unique award show in the country. After the grand success of its last two editions, ‘Kids Choice Awards’ is back in 2017 to empower the kids by providing them with an opportunity to vote for their favorites across multiple categories and decide who will take home the iconic Nickelodeon blimp. Dabur Red Paste presents Nickelodeon Kids Choice Awards 2017 powered by Jolly Rancher in association with Yellow Diamond and Funskool is slated to take place on 15th December 2017 at NSCI Dome, Mumbai. The awards which resonates ‘Kids ki choice, kids ki voice’ will once again be marked as India’s time to Slime!

them an opportunity to voice their choices. It is with this belief that we started KCA and with each passing year, not only have we dialed up the connect with our young audiences and their parents but also have exponentially increased the property’s appeal to the advertising community. This being Viacom18’s 10th anniversary year, and Nickelodeon being one of the founding brands the network launched with, KCA will be bigger, better, louder and slimier than ever before!”

This high octane awards show will celebrate 2017’s cinematic excellence and present top honors to the best of the best from the Indian film, television and kids gaming industry. As the youngest demographic rises in significance to the celebrity community and with celebrities increasingly focusing on building a fan base amongst this audience, KCA provides the perfect platform to the stars to broaden their fan following. This is evinced by the growing presence of the film and television personalities that will be a part of this year’s KCA. The gala event will feature some enthralling performances by numerous Bollywood and television personalities like Alia Bhatt, Ranveer Singh, Kriti Sanon and Badshah amongst others. Anchored by the popular comedian Bharti Singh and renowned actor Rithvik Dhanjani the evening is sure to witness a host of emotions and a sense of achievement amidst much fanfare and aplomb. Making its mark at Kids Choice Awards 2017 and creating memorable picture perfect moments will be the world renowned “Slime” which is sure to have many of our celebs turn green.

KCA 2017 is being promoted through a robust 360-degree marketing campaign. The expansive marketing campaign will have promotions with an extensive cross channel plan, large scale on-ground, ambient engagement and interesting on-line interactivity. In addition, numerous touchpoints spanning consumer & trade print, radio spots have been planned. An extensive digital and social media buzz and engagement campaign will leverage the combined clout of Viacom18’s social media assets from its varied brand portfolio. A marquee event for Nickelodeon, KCA 2017 will see integrations from some of the top brands in the country catering to young audiences.

The music on that Nick PK promo just seems unfitting. #JustARYThings?
A

ALL THREE NICK CHANNELS AIRING MOTU PATLU AT THE SAME TIME. Are you kidding me?? 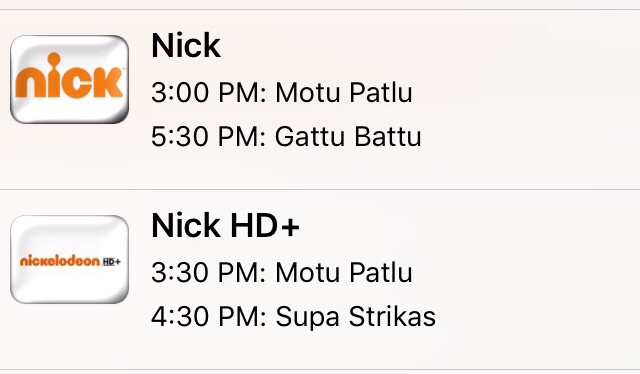 This is really sad to see. I mean, how can they do that in the first place?

Nick UK and Nicktoons UK started to use their Christmas look today. The bumpers are the ones from previous years.

PicardMan
My alma mater will always break my heart. Just two yards away from the college football playoff.
Today at 1:36 AM •••

Streaker Prower ilpuyopuyo Streaker Prower wrote on ilpuyopuyo's profile.
If Litton purge didn’t affect The CW, what would be the 2021-2022 schedule for Vortexx on The CW
Yesterday at 4:38 PM •••

IDOconsiderwaffles
Still here, for better or for worse
Yesterday at 3:55 PM •••

AngelAnimate15
Lord Decibel, along with the episode he debuted in, turns 5 years of age today! Check out my NewGrounds account for details: Today’s the Day; JOLLY DECIBEL DAY!!!!!!!!!!!!!!!!!!!

NOTE: I go by a different name on NewGrounds, but once I become a supporter of the site, I’ll change my username on there.
Yesterday at 11:18 AM •••