Orchestral theme from the Harvey Beaks episode, "Squashbuckling" which premiered on Nicktoons December 20, 2017.

The story behind Later, Dingus:

Fee and Foo are reunited with their parents, forever changing their lives and friendship with Harvey.​

Music from Rage Against the Michelle:

Shouldn't the Harvey Beaks episode "The End and the Beginning" be marked as a series finale?

Toons Fan said:
Shouldn't the Harvey Beaks episode "The End and the Beginning" be marked as a series finale?

It is, since there's no other new episodes after this.

NeoplanDan said:
It is, since there's no other new episodes after this.

Sent from my LG-TP260 using Tapatalk
Click to expand...

Toons Fan said:
It's not marked as a series finale in post #520.

Probably @PinkiePie hadn't labeled it or if he unsure if the episode is the finale.

It’s the finale, though I didn’t think we marked that in the talkbacks. Do we?

I really enjoyed the finale. It’s sad that the show ended, but I am fine with the finale. Farewell, Harvey Beaks. 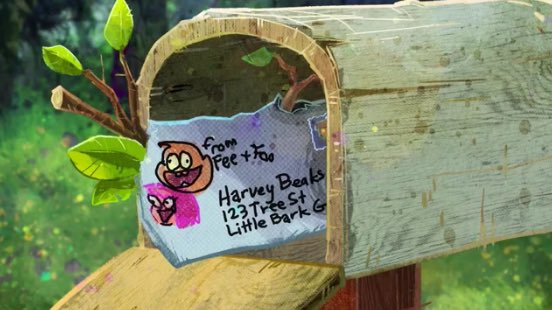 The End and the Beginning

Such a beautiful episode, and a wonderful end to the series. Fee's skepticism about meeting her parents was realistic. It was kind of their fault they were lost. It was also nice seeing Foo being the voice of reason telling Fee that even though they lost them, they still never stopped looking for them. It was cute seeing how Harvey first met Fee and Foo.

The ending is bittersweet, but needed to serve as the end for the series. The Harvey Beaks team did a really good job wrapping up the series. It's a shame it had to end prematurely. I felt it had a long shelf life. But I guess it's better than the alternative.

Thank you C.H. Greenblatt and the rest of the Harvey Beaks team for bringing us such a fantastic series.
Reactions: bart_simpson7, Freav and Ghostbuster

I do feel that it was a bit weird to make the twins go with the parents but I ultimately respect the decision.
The finale left a bitter feeling in my mouth, but I do believe it was amazing.
Irving's talk to Harvey did make me drop some tears, it also felt like it had some sort of a meta aspect to the fans in the way of "don't be sad that it ended, be happy that it happened".
The final scenes with Harvey crossing the safety line was made me lose it though, it was an excellent and effective way of wrapping up everything the show was about. I relate to Harvey in many ways so it hit a bit too close to home.


"Occasionally when I work on a series, I write a few pieces of music that aren’t necessarily for specific scenes. These are more like mood pieces that encapsulate the overall feel and character of the show. Here’s an unused piece of music from Carl Greenblatt’s Harvey Beaks show I composed with no clear intention in mind. I was attempting to write as the love child of Carl Stalling (Looney Tunes) and Bernard Herrmann (Psycho/Vertigo). It was just me having fun at the orchestra’s expense (not to mention Nickelodeon’s expense). I love that the studio and our wonderful producer afforded us the freedom to experiment like this and make our little show as good as we could make it.

A special shout-out to the genius orchestrator Steve Bartek, who had his way with my melodies on the second half (at my request) and turned this in to something even more absurd than what I hoped for!

chum_chum said:
Yeeah! Ru also made a great cameo in Bubble Guppies. I think the return is possible, cause she is from the Viacom family.
I also hope that one day we will found out the bigger story behind the Finger.
Click to expand...

Actually, RuPaul voiced RuPearl the snail drag queen as a guest star in one episode!
He was with Nonny as a guest judge because probably the TV show crew probably got into the drag queen fandom as a guilty pleasure....

(This statement is my guess, don't take it seriously...)

Also, that wasn't a cameo at all, dude...
I watched the clip myself on YouTube and I understand what's coming from....

I would be happy...if I had a Hulu subscription that is.

Hulu is expanding for the recent Nicktoons of this decade, now with Harvey Beaks added It's up to 3 modern Nicktoons
Reactions: Spacething7474, I.R. Shokew, 19MagiswordLane and 1 other person
M

Tacomaster Nexonius Tacomaster wrote on Nexonius's profile.
I doubt you'll see this, but as a parent/grandparent, what do your kids/grandkids want to see on TV?
Today at 9:09 AM •••

Rainbowkid37
MMMM, These Jelly Doughnuts Are Great! - 4kids When They Killed Fox's SatAM Line-up.
Today at 1:07 AM •••

Tacomaster
Who would win in a fight: Mighty Mouse or Underdog?
Yesterday at 8:22 PM •••