The schedule for the final premieres. It’s not ending before Christmas or in January.

The new episodes will air at 8:30 P.M.
http://www.thefutoncritic.com/showatch/harvey-beaks/listings/

Here’s the promo for the episodes airing this month:

Harvey has to prove he's tough to join Blister's greaser gang; Harvey finds an innocent project that could bring the community together, which, of course, does the exact opposite.
---
The Late Late Afternoon Show With Harvey Beaks/Grunicorn
Episodes 82 and 83 (Episode 44)
Premieres December 19, 2017 at 8:30 P.M. on Nicktoons

Harvey hosts a talk show in his living room, but goes off-script after he learns a terrible truth; the children race to find a rare magical creature that grants the winner their heart's desire.
---
Photo Finished/Squashbuckling
Episodes 84 and 85 (Episode 45)
Premieres December 20, 2017 at 8:30 P.M. on Nicktoons

Miriam gets into a social media war to prove Harvey and Michelle are the cutest kids in Littlebark; Randl eyes an old boat for scrap, but the vessel is infested with children pretending to be pirates.
---

Later Dingus/Hair to Help
Episodes 86 and 87 (Episode 46)
Premieres December 21, 2017 at 8:30 P.M. on Nicktoons
​
Fee learns how to say goodbye after a longtime friend passes away; Piri and Harvey try to help Tara after she loses her creative inspiration for hairstyling.

Break the Lake/The Amazing Harvey
Episodes 88 and 89 (Episode 47)
Premieres December 21, 2017 at 8:30 P.M. on Nicktoons
​
There's a new lake spirit in town who tries her best, but she's a hot mess; Harvey becomes a magician, but keeping the secrets behind the magic turns into a great burden.​

Hug Life
Cute episode. I love how Harvey went around his challenges, like announcing a fire drill, or cleaning up the deadly road.

One the Fence
Good episode. Shows how obsessed people are with picking a side, instead of thinking rationally.

So I've seen all the episodes because I'm not from the United States. But I'm glad about this. We'll finally get to see them in high quality and I'll take any place I get to discuss about them.

Today's episodes are very good. On the Fence is probably my favorite of the two, probably the most political-ish episode of the show and Harve being dissapointed of democracy is both comical and charming. Hug Life is an entertaining episode all the way through too.

(Also, for those who were once interested in the show, nick probably has done its best to reduce the hype to a minimum (which was never really high anyways) but watch the episodes, you probably wouldn't be dissapointed.
Of the ones that air this week. Tomorrow episodes are great, and Later Dingus is a serious contender for the best of the show, I think it's admirable that they had the guts to do that episode.)

Man, it feels so good to be watching this show again. It's been way too long. Since Disney XD seems to be barren of premieres at the moment and CN's schedule is a trainwreck, it's nice to see that someone is treating us during the holidays.

On the Fence is definitely the better of the two.

The Late Late Afternoon Show with Harvey Beaks
Fun little episode that gets some of the ensemble cast together. It also shows Harvey isn't perfect and he unintentionally excludes some of his friends like Princess, and Mikey in his activities.

The Grunicorn
A nice and touching episode. I'm glad it ended on her making her wish, rather than tie up the episode in a nice bow.


Music by: Raymond Scott & Ego Plum | "Missing Harvey" premiered on December 27th, 2017 and is the first cartoon to license and feature the electronic compositions of Raymond Scott. The song is featured throughout the episode and also featured in multiple original arrangements by Ego Plum.

The Late Afternoon and The Grunicorn are two of the best later episodes in my opinion. The Late Afternoon is very funny and charming, I also love the huge amount of musical nods to earlier episodes through the whole thing (one of the songs from Steampunks, the one from Secret Gordon amongst other things).

The Grunicorn is special, I wasn't sure if the version of the episode I'd seen had cutted a scene at the end but from the above comment I'll guess not. It's also the first episode since the very beginning of the show where we really see Fee worrying about her origins. The whole second half is very bittersweet, but handled perfectly, the ambientation helps, some lovely colors near the end of the episode.


Music by: Raymond Scott & Ego Plum | "Missing Harvey" premiered on December 27th, 2017 and is the first cartoon to license and feature the electronic compositions of Raymond Scott. The song is featured throughout the episode and also featured in multiple original arrangements by Ego Plum.
Click to expand...

Love to see Ego upload something again. Hope there's more before the end of the show..
Last edited by a moderator: Dec 20, 2017

Freav said:
Later Dingus is a serious contender for the best of the show, I think it's admirable that they had the guts to do that episode.
Click to expand...

I’m both surprised and not surprised that one has gone unnoticed (or at least I haven’t seen much on it). I didn’t even know what happens in it it until I drafted the talkback.

Squashbuckling is a good, if slightly by the numbers, episode. Randl and his mom are entertaining as always.

I really like Photo Finished, it was just a very entertaining watch all the way through. Pretty sure I've seen that kind of plot (parents get addicted to technology) before but it was well done on this episode and it really goes along with Myriam's personality.

(All of this is from what I can recall when I saw them months ago, I'm very busy this week and will probably revisit these episodes when I have the time)

From the end of Later Dingus: 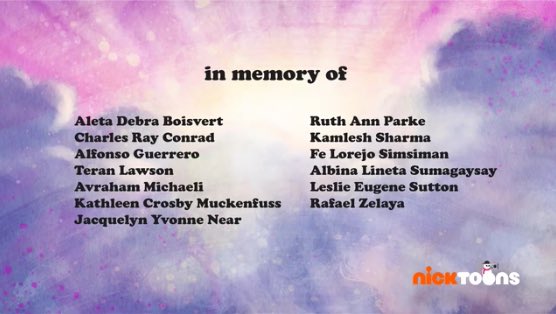 Later Dingus is incredible. It's easily the saddest episode of the series, and it gets even a bit hard to watch after the second half, but I'm glad they had the courage to do this one, because I think it's one of the most grounded and well handled episodes about death I've seen in a children cartoon.
The scene with Fee crying while reading the note is particularly tough, it feels nightmarish (without the show even forcing the feel) and I feel like it mirrors relly well what a kid could feel after the unexpected death of a loved one, especially one not familiar wth the concept of death (like Fee). I find it weird how this rather uplifting show was the one to do this kind of thing, which probably adds to the shock really.

Hair to Help was such an odd choice to follow this episode, as it's one of the most lightweight/silly episodes of the show. But it's also great, I love Tara and I'm glad that we finally see an episode focus on her. It's great having Rupaul's character back too of course. Now, talking about Rupaul, I think it's interesting how they went full drag queen in this episode, not even subtle hints, but the whole episode is sorta based on that

In all honesty, I think that both of these episodes represent a point where the show knew it was ending, CH Greenblatt wasn't particularly happy with the network (as we know), so it decided to take a lot more risks before the finale. I'm glad that they did it, because as a result, we get two favorites of mine.
R

I didn't watch the new episode, but curious considering what the episode was. Who are all the name listed?
K

rockorockorocko said:
I didn't watch the new episode, but curious considering what the episode was. Who are all the name listed?
Click to expand...

Which ones? They are each scheduled new episodes for this week and next week

kanc said:
Which ones? They are each scheduled new episodes for this week and next week
Click to expand...

^ Except that it aired yesterday.

rockorockorocko said:
I didn't watch the new episode, but curious considering what the episode was. Who are all the name listed?
Click to expand...

Some crew members’ relatives who passed away during production.

PinkiePie97 said:
Some crew members’ relatives who passed away during production.

Wow... that is quite powerful. Might have to watch this episode.

So unfortunate what has happened HB. I liked it a lot, but only watched it on Nick.
You must log in or register to reply here.

T
Do you think Nickelodeon will treat animation better in 2021?
2

G
Ghoster1987
Finishing up Metroid Dread by acquiring everything only to be disappointed when the last energy tank and missile you needed an Amiibo.
11 minutes ago •••