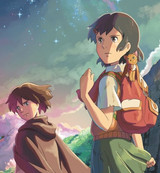 Feature film distributor GKIDS has announced that the library of Makoto Shinkai films released under the Comix Wave label that includes THE PLACE PROMISED IN OUR EARLY DAYS,&nb

Feature film distributor GKIDS has announced that the library of Makoto Shinkai films released under the Comix Wave label that includes THE PLACE PROMISED IN OUR EARLY DAYS, 5 CENTIMETERS PER SECOND, CHILDREN WHO CHASE LOST VOICES, and Makoto Shinkai’s directorial debut short film VOICES OF A DISTANT STAR will be released by the publisher and flim distributor on home video later this year. GKIDS previously released and distributed Weathering With You to great success theatrically and on home video.
Click to expand...

Looks like Makoto Shinkai is in good hands.
You must log in or register to reply here.

"The Place Promised in Our Early Days": A Modern Animated Classic

SweetShop209
For someone who's been around less than a year, Barbie Brooklyn Roberts has gotten plenty of (well deserved) attention.
Today at 2:15 PM •••
K
kanc
According to zap2it, nick@nite will air Seinfeld starting early Tues May 31 2am-4am, that means Mom will be off the lineup after May 26.
Today at 8:29 AM •••
K
kanc
I'm not sure why Nickelodeon tweet for SpongeBob movie airing tonight has nick@nite bug showing, technically it starts at 9pm, not 8pm
Today at 8:28 AM •••