I set up a talkback for the Fantagraphics Libraries but I think we could use one for the regular comics too. I haven't been keeping up with recent IDW issues (although I've still been buying and collecting them) but you can also talk about old issues here from Gladstone, Disney Publishing, Gemstone, and BoomKids here, as well as digests, comic albums, and trade paperbacks.

Also Muppet and Pixar Comics are fair game as well.

Recently picked up 38 and 39 of IDW Uncle Scrooge, really loved it.

Issue 38, Magica and Scrooge getting the wrong apprentice was an interesting story and Maggie is so adorable.

Issue 39, seeing Daisy take Donald's place in Scrooge's adventure was need to see it. Her taking cellfish, and acting like millenial, well it is nice that see tries to stay with the times. What I love best of all, the little gesture that shows she is family even though she is not blood related, the nephews calling her aunt Daisy and Daisy calling Scrooge are the little things I love. And makes Mickey's Christmas Carol more weird to me.
Reactions: 1 person

I will probably have to do a binge-read of all of my modern comics at some point. The problem is the Fantagraphics Libraries are so big (and long) and tempting.

The first big review I plan to do for this thread is definitely gonna be the first DuckTales Classics Trade Paperback.

I remember this comic when I was a wee lad in the late 70's.
Reactions: 1 person

So have April, May, and June have ever been as mischievous as early Huey, Dewey, and Louie in the newspaper strips and the cartoon shorts?

So far or what I found they only cause trouble for Daisy or Donald accidental, like the time they sabotage Daisy's time at the beauty parlor. They don't have done anything intentionally bad for our protagonist from what I seen? I saw in the first episode of Legend of Three Cabralleros, they can play tricks on people, but that was directly at the villain, they didn't try to do anything bad to Donald.
Reactions: 1 person

zoombie said:
So have April, May, and June have ever been as mischievous as early Huey, Dewey, and Louie in the newspaper strips and the cartoon shorts?

So far or what I found they only cause trouble for Daisy or Donald accidental, like the time they sabotage Daisy's time at the beauty parlor. They don't have done anything intentionally bad for our protagonist from what I seen? I saw in the first episode of Legend of Three Cabralleros, they can play tricks on people, but that was directly at the villain, they didn't try to do anything bad to Donald.
Click to expand...

I'm not sure. I'm not as familiar with April, May, and June as I am with the other Barks, Rosa, and Van Horn characters.

From a Flemish newspaper in the early 1930s.

I remember getting CHIP n DALE #41 at a Flea Market.
I always did and still do enjoy watching the DONALD DUCK cartoons, facing against Chip and Dale.

A question I have, it is kind of a catch 22 when you compare the comics to the animation canon. As April, May, June ever meet or at least appeared in the same panel like a cover page as Millie and Melody?

It is catch 22 in that Minnie and Daisy being best friends that is a animation thing, in terms of comics, from what I have and heard it is still sort of they do their own thing, so it doesn't make as much sense and requirement as say in Mickey Mouse Roadster Racers show.

In another note can I talk about the Descendants Free Comic Book Day, I am not really a fan of the Descendants franchise, but I love Cinderella, this one really interests me. 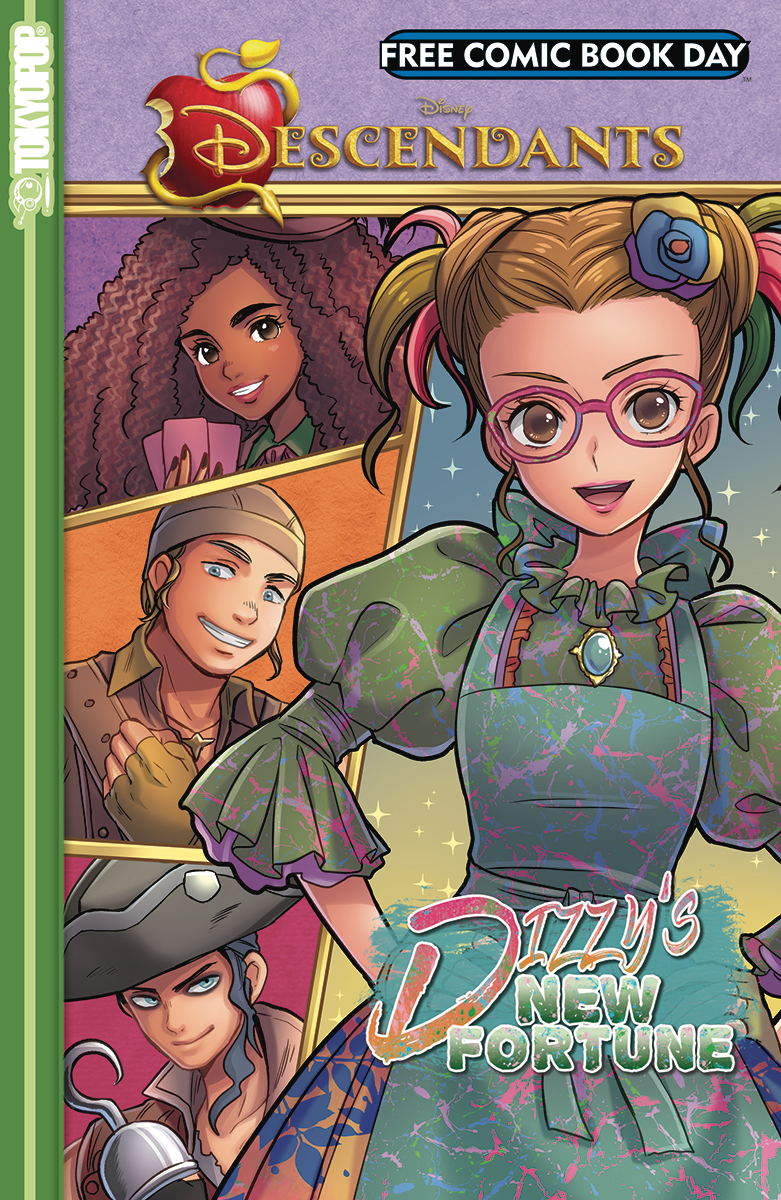 A full-color, manga-style graphic novel telling a brand-new story in the world of Disney Descendants, starring Dizzy, the granddaughter of Lady Tremaine, and featuring a host of Villain Kids from the Isle of the Lost! This is the first chapter of Disney Descendants: Dizzy's New Fortune.<br>...

So she is Drizella's kid right? Has to be, her design, and the name, it has to be. Unless her father has a really dominant jean, I just don't think she is Anastasia's kid unless she is adopted.

We know the direct to video sequels are not canon, so we don't know if Anastasia or Drizella ever turned good. Granted they were just lazy kind of snobby jerks, not out right villains like Tremaine. (though ironically in Cinderella III, Drizella did tread that villain line just a bit) Maybe they were able to get away from Tremaine's influence maybe not.

I wonder if we will see Anastasia's kid be in this, and he or she could be kind of a antagonist to Dizzy. Even more if Anastasia did follow the direct to video sequels formula and turn, but still the evil of the grandparent just skipped a generation right to him or her, it happened in Star Wars. We will see.
Last edited: Mar 29, 2019
Reactions: Fone Bone

Another comic I found at a Flea Market in my youth, UNCLE SCROOGE #152.

365 Days With Winnie The Pooh

This is a thick hardcover book of classic Winnie the Pooh comic strips over the years from Dark Horse. They aren't a chronology at all and are more of a "Best of" situation. The book contains Daily Strips, Sunday Strips, and some Sunday strips loosely based on some of the animated featurettes.

How is the strip? It's actually quite funny at times with its share of corny jokes and old-timey comedy. The characters often talk to the camera and bemoan whenever they can't think of a joke to end the strip. It's all charming and funny stuff.

And yet that specific mindset is antithetical to everything Winnie The Pooh is about. Practically every Winnie the Pooh project is mainly geared towards preschoolers, or at least those were the people who responded strongest to it. The comic strip is the only thing in the franchise that seems to be geared towards kids ages 10-12, and even has some humor adults would dig. It's interesting in that respect, but I also feel that it doesn't really feel like Winnie the Pooh. I talk a lot of smack about the DuckTales reboot for doing wrong by the Disney Ducks and rejecting the entire reason the Ducks are cool to begin with. I shouldn't give this comic strip a free pass for doing the same thing after I did that.

The artwork is beautiful and I'll tell you why I responded so well to it, and why I responded so well to both Carl Bark and very early Floyd Gottfredson. Everything is completely on-model and has the exact same designs as the cartoons. Nowadays artists like Don Rosa, Casty, Romano Scarpa, and William Van Horn have their own distinct styles and interpretations of the Disney characters in their artwork. What I appreciated about Barks and very early Gottfredson is that they all hewed very closely to the Disney "House style". It's not all that common. The only other Disney artists who do that to spring immediately to mind are Vicar and Daan Jippes, and Daan Jippes can be hit or miss in that department, especially when doing comic book covers. But Richard Moore did all of the artwork completely on model

I'll tell you the actual selling point of the book and why you should get it. The colors are beautiful. The Daily Strips were originally black and white, so seeing color in the strip with the sunset is great, especially with the shading modern coloring allows. And the old Sunday strips used to have very basic newspaper coloring, and unlike the Fantagraphics Collections of Mickey Mouse strips, which took pains to keep the coloring consistent with how the strips were originally presented (which led to a white Pluto and a yellow Donald Duck) this collection redoes the colors so that they look fantastic. Honestly? I wish Fantagraphics had both done that for the Sunday strips, and actually colored the Daily Ones while they were at it. Make no mistake. The Fantagraphics libraries for Carl Barks, Floyd Gottfredson, and Don Rosa are far superior to this book because they are for completists. But the presentations and colors in this specific book look SO much better. Book Overall: ***.

A lot of funny jokes including Pooh and Piglet riding on word balloons. My favorite joke was when Piglet informs Pooh that grasshoppers smell with their knees, Pooh asks him if he ever says anything sensible. Remember me saying some of these strips are funny? That! That! Remember me also saying these strips are totally not in the spirit of Winnie The Pooh? Also that! That! ***.

Loosely based on the early Winnie The Pooh animated theatrical featurettes, these Sunday strips are somewhat serialized, and don't use the "gag a day / strip" formula the rest of the strip does. Also the humor and sensibility is far closer to the books and cartoons simply because they are adapting the material rather than telling snarky jokes. I probably liked it more because of that. ****.
You must log in or register to reply here.
Share:
Facebook Twitter Reddit Pinterest Tumblr WhatsApp Email Link

harry580
what is upsetting about comedy central is that the network is always airing the office series too much
Today at 5:03 PM •••

harry580
did you think that nickelodeon should slow down the reruns of spongebob and air the old spongebob episodes on nicktoons?
Today at 5:02 PM •••

SweetShop209
I wish a happy birthday to Corey Burton (65) (voice of Professor Ludwig Von Drake for over 30 years, as well as Megatron on Transformers Animated), Sumalee Montano (48) (voice of Arcee on Transformers Prime and Katana on Beware The Batman), and Travis Willingham (39) (voice of King Roland on Sofia The First and Thor on many Marvel cartoons since Avengers Assemble).
Today at 10:58 AM •••
Top Bottom