From the creative forces behind the DC Universe Animated Original Movie line, DC Showcase puts the spotlight on favorite characters from throughout the annals of DC Comics in fascinating, short-form tales sure to entertain longtime and new fans alike. DC Showcase Presents...Green Arrow!

Synopsis: Oliver Queen arrives at the Star City International Airport to pick up his girlfriend, only to be forced into action as Green Arrow to protect the 10-year-old Princess of Vlatava from his old nemesis Merlyn the Magnificent and the League of Assassins.

Please post all discussions and comments about the Green Arrow animated short in this thread! Please discuss the other aspects of the home video release of Superman/Batman: Apocalypse in the proper talkback, as linked below.

Note: Remember, this talkback thread is for discussion of the animated short only. If you wish to talk about the home video release or feature film, please click on the appropriate link above. We appreciate and encourage discussion, but please keep your posts civil, relevant and insightful. Please do not post any improper or inflammatory material, as we will issue warnings if we believe it necessary. And remember to keep the discussion ON-TOPIC!

...Liked it ...found myself imagining this fitting in w/ the JLU show very easily (would have made a great JLU episode side-story/"B-story") ...my personal favorite of the animated shorts so far! (...but, I'm REALLY looking forward to the Shazam! short ...hope that one doesn't disappoint )

I liked the short a lot. It's the most fun short they've done and it's nice to have a change of pace from the overall dark nature of the other two.

As I stated on the DC Universe animation boards regarding this showcase. I truly enjoyed Green Arrow than the two previous shorts Spectre and Jonah Hex because it was less dark and had more action and was truly exiting. What really made it work was the voice of Green Arrow Neal McDonough. He deserves high praise for his
voice performance and deserves his own DC Universe original movie along with Black Canary {Grey DeLisle} by his side. This short was a perfect match for Superman Batman Apocalypse.

I loved the Green Arrow short! It had great animation, great voice acting, great action and direction. It almost felt like a continuation of ol' Ollie from Justice League Unlimited. I would definitely love to see a full-length Green Arrow animated feature (along with one for The Flash and Aquaman).

I still think The Spectre short is still my favorite -- that's probably because I really dug the retro horror feel it had -- but Green Arrow is right up there behind it.
R

Wow. Did Phil Bourassa do the character designs? Because I LOVE the design they did for Black Canary.

The entire voice cast was awesome too.

RoryWilliams said:
Wow. Did Phil Bourassa do the character designs? Because I LOVE the design they did for Black Canary.

The entire voice cast was awesome too.
Click to expand...


Phil Bourassa is listed under "Character Design" ...so I assume they used his designs for BC and GA.

...well, it seems Phil Bourassa gives credit for Black Canary's design to Jerome Moore on JL:Co2E ...since he is also listed under DC Showcase Presents:Green Arrow's "Character Design" credits, perhaps he's to be credited for BC's design (?) ...I'm keeping an eye on both their deviant pages for any confirmation
Last edited by a moderator: Sep 29, 2010

I loved this short, and if I were more talented, I'd clip together a few bits from this and make a fake "There's an App for That" ad from it. "Wanna identify a supervillain up to no good or just traveling to Albuquerque to visit his grandmother? There's an app for that." I kind of missed Kin Shriner as GA, though -- while my ideal GA voice actor is still Bruce Campbell (come on, tell me that wouldn't be completely awesome), Shriner was a big reason why GA became such a favorite of mine on the show. Not that Neil McDonough did a bad job, though.

Another fine short. Not as hard edged as The Spectre or Jonah Hex but still lots of fun to watch. While Ollie got his butt handed to him a few times here, this was still the most physically adept version I've seen in animation. I really liked his interactions with the little princess/queen and the cavalier way he handled everything. The ending feels a little hokey but I'd be lying if I said it doesn't at least cause me to have a smirkish smile each time I see it. It just makes me hate what's happened to the Arrow family in the comics even more though.

The Spectre still holds it's place as my favorite ( and it will make for some fun rewatching next month) but Green Arrow certainly shows that the quality level of the Showcase shorts is staying high. I really hope that the next batch of shorts does as good a job of adapting the obscure and the less popular characters of the DCU to adult animation. I also hope Joaquim Dos Santos stays involved with them. I'd love to see him try a full length someday.

Weirdo From Another Planet

I enjoyed it. Green Arrow isn't anywhere close to a favorite of mine, but this offered pretty much everything I would want from a superhero story: decent story, good sense of light hearted adventure, some light comedy.

It was a decent short. The ending was very cool, though, seeing Black Canary.

This was easily mt favourite of the shorts, great voicework on Green Arrow and lovely to hear Grey Delisle doing a different spin on Black Canary. And Steve Blum and of course Malcolm McDowell are always brilliant.

Loved the designs, the regal look for Vertigo and a great look for Canary. The Princess was an interesting character, she could've been annoying but didn't come like that, a bit of talent on both the voice end and the writing one.

Great to see a truly happy ending for a short, looking forward to the next one.
Y

RoryWilliams said:
Wow. Did Phil Bourassa do the character designs? Because I LOVE the design they did for Black Canary.

The entire voice cast was awesome too.
Click to expand...

I laughed at all those green puns and instances the color showed up in the short. Probably the one where Merlyn talks about Green Arrow always stealing the 'limelight' was the most unexpected. I, too, liked the designs a lot, including Black Canary's...because I like good art. Thought it was neat they did away with Vertigo's trademark eyepiece.

Wonder what the extra scenes will be in the Superman/Shazam! collection. Perhaps the fight on the baggage belt between Green Arrow and the Mercenary or here's hoping, more between Arrow and Merlyn.

I hope this Showcase short convinces the Powers That Be to greenlight Tab Murphy's Green Arrow: Year One script.

EDIT: The coolest bits were when Oliver Queen calls Dinah on his touch screen cell phone, you can briefly see his call list-Dinah, Bruce, Clark, Wally, Mort, and Diana. Not only a shout out to superheroes but to Mort Weisinger, co-creator of Green Arrow and Editor on More Fun Comics #73, when the hero debuted in 1941.

Also when Queen takes the image capture of Merlyn and verifies his identity, you can see the Justice League logo as a gold colored 'JL' swirling on the phone's screen.
Last edited by a moderator: Oct 2, 2010

I love the way that Ollie introduces himself, "Green Arrow, Justice League of America", in pretty much the same way you'd expect a law enforcement officer to.

Hulk not good with words.

Yojimbo said:
Thought it was neat they did away with Vertigo's trademark eyepiece.
Click to expand...

I'm pretty sure Count Vertigo has only ever worn his 'hypnotic eyepiece' in BTAS's "Off Balance" and The Batman's "Vertigo." Traditionally in the comics, he usually looks like this: 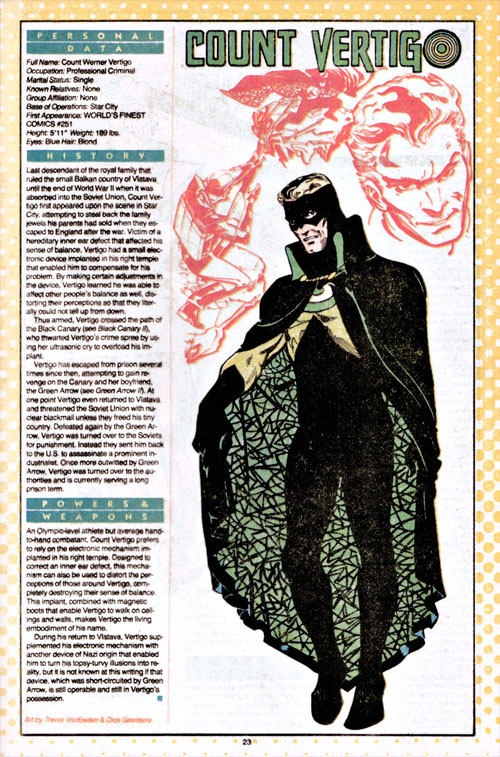 Although one has to question the wisdom of a Green Arrow villain whose costume design has what looks like a large bull's eye on it's chest.

I can understand the complexity and difficulty of animating a fishnet design for BC in a series where she's regularly featured and constantly moving (such as JLU or BATB), but in this short she only appeared in a handful of shots, and it's not as though she was running and jumping all over the place - she was fairly static. C'mon, where's the fishnet love?!

It was good stuff

So, this short was pretty great, actually.
I felt it was on par with, if not slightly better than, the Jonah Hex short.
The voice acting was great. But then Neal Steve and Malcolm never cease to entertain.
Loved the story. The whole kid-princess-queen thing was a great element to use. And Ollie's interaction with her made it all the more entertaining.

I still think 'The Spectre' is the best short so far. And I doubt even the Captain Marvel short will be able to knock it out of the #1 spot for me. And I'm not even a huge Spectre fan. I just think that was the best one.

I think the Green Arrow short can rest in my #2 spot.
We'll see if Captain Marvel takes that spot from him.

W.C.Reaf said:
I liked the short a lot. It's the most fun short they've done and it's nice to have a change of pace from the overall dark nature of the other two.
Click to expand...

Agreed. There wasn't a single thing I'd change about this film except make it longer.

I can understand the complexity and difficulty of animating a fishnet design for BC in a series where she's regularly featured and constantly moving (such as JLU or BATB), but in this short she only appeared in a handful of shots, and it's not as though she was running and jumping all over the place - she was fairly static. C'mon, where's the fishnet love?!
Click to expand...

Considering the fishnest are basically just there to make fanboys drool and serve no practical or logical sense, I'll be glad if they're never seen in animation ever.

Hulk not good with words.

KillerMoth said:
Considering the fishnest are basically just there to make fanboys drool and serve no practical or logical sense, I'll be glad if they're never seen in animation ever.
Click to expand...

Really? I thought that's what her massive cleavage was for.

Mod Note: Let's try and keep discussion here appropriate and dignified, please.
You must log in or register to reply here.

Troy Troodon
Here's my thesis film ony my strugles with being atypical
Yesterday at 10:35 PM •••

Vuxovich
Happy birthday to a great voice actor that is Eric Bauza!
Yesterday at 5:58 PM •••
J
Jonathan Teka
So, in the animated series Jellystone!, has anyone noticed that Snorky's design is based off what he looked like in the first season of The Banana Splits Adventure Hour rather than in the second season of said show?
Yesterday at 5:39 PM •••