The set looks nice visually, but as i said above, discs being held in pockets means i'm out for now, too impractical for my liking. It's usually a hassle to get the discs in and out and i have read horror stories of similar sets already coming with a number of scratched discs. I just don't want to play that lottery and potentially have to request multiple replacements, even more so because i have to rely on importing them from the US to the EU. I also don't care about Pop Vinyl figures whatsoever. This has been my most awaited release since the start of the HD era and i applaud WB for finally getting around to remastering it. I will gladly buy it when they put out a standard edition eventually. Actually, maybe they will release a more stripped down set in the UK or Germany, it wouldn't be the first time.

Don't worry, i'm sure they will. This isn't called a limited edition for nothing, and they'll want to make money off the remaster beyond that. This is just for the segment of buyers that is willing to pay a bit more than the average customer. On a side note, i've noticed a trend of including films with limited collector's sets of animated series, which are then dropped for the standard edition release, so they might do the same in regard to B:TAS, but i think most of us already got MOTP and Sub-Zero anyway.

If it doesn't include The Adventures Of Batman And Robin: The Lost Episode, I don't need to double-dip. Kind of a relief, actually.

Fone Bone said:
If it doesn't include The Adventures Of Batman And Robin: The Lost Episode, I don't need to double-dip. Kind of a relief, actually.
Click to expand...

I get the sentiment, but for me significantly improved image and sound quality trumps everything else. It's not like this is a reissue of the same old DVDs in a fancier box.

The DVD quality was fine for me. Or at least fine enough that I don't need to spend that much money to replace it.

Fone Bone said:
The DVD quality was fine for me. Or at least fine enough that I don't need to spend that much money to replace it.
Click to expand...

I simply don't get the appeal of Funko Pop's, so they do nothing to entice me. They don't even look design accurate to the series. Weird choice all round.

Why include Phantasm and Sub-Zero, but not Mystery of the Batwoman? If you want it to be complete, you need to go all in. Frankly, even including them seems like a slap in the face to those that already spent money on the Warner Archive Blu-Rays.

A real mixed bag in terms of packaging and ''goodies''... but I'm waiting to see if there will be a non deluxe set or a UK version.

The Funkos are an odd choice. I've already pre-ordered it but I would've preferred they just left those out and given us a thicker bonus book.

And Pfeiffer-Pfan, I was just about to post that same thing. Why not include Mystery of the Batwoman. Is it because it wasn't remastered? That's still a weak excuse for it not to be included. Hopefully a press release will come out with some more answers.

Gotham Girls being absent is weird too, as are the Two of a Kind and Mad Love Motion Comics. Not giving me a real reason to rebuy material I already have.

Amazon France lists a B:TAS set for 59.99 EUR, which is approx. $70 (Credit to user Scavenger from ResetEra). No image up yet, but this will probably be the standard edition i was hoping for in Europe. Text on the release will likely be only in French, but presumably it willl have an equivalent release in the UK and/or Germany, which i would gladly get over the US LE. I do hope they will still release something like that in the US as well though, just so the US based folks here will have the choice between the LE and a more price-conscious set. Now i'm just crossing my fingers that this EU release will actually have the discs on proper hubs, instead of slid into cardboard pockets.

By the way, there isn't a complete breakdown of the contents yet, but Blu-ray.com lists a new featurette:

Everyone is also forgetting "Batman & Harley Quinn". That completes TNBA.

WBShop now lists the Batman: The Complete Animated Series" Blu-ray collection, and has both a better shot of the collection and new details on what the set includes.

Don't worry, they most likely will release a standard set. You just have to wait a little longer. I believe Batman 66 got the same treatment. As for packaging, well, I can't say they'll be good to us there. But I can say that replacement cases are cheap and there are people out there who make some excellent fan art that you can use for a cover.

The complete press release for the Batman: The Complete Animated Series Blu-ray collection is up at The World's Finest! Get comfortable - there's a lot to read! Click the image below to check it out! 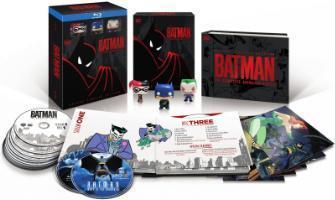 For all the UK/Ireland fans:

HMV has the exclusive rights to Batman: The Animated Series - Limited Deluxe Edition for £80

Frankly, that's a bargain and they'll be region free for anyone looking for a cheaper alternative.

EDIT: Dear Lord... the Deluxe Edition is now sold out, in less than 24 hours. WB are just printing money with this set.
Last edited: Aug 3, 2018

Ahsoka said:
The Funkos are an odd choice. I've already pre-ordered it but I would've preferred they just left those out and given us a thicker bonus book.

And Pfeiffer-Pfan, I was just about to post that same thing. Why not include Mystery of the Batwoman. Is it because it wasn't remastered? That's still a weak excuse for it not to be included. Hopefully a press release will come out with some more answers.
Click to expand...

MOTB was already animated in HD wasn’t it? Or am I crazy? lol

Dusty said:
MOTB was already animated in HD wasn’t it? Or am I crazy? lol
Click to expand...

And the Blu-ray exists already. ROTJ was first I think then MOTB and MOTP and Sub-Zero in recent time.

Warner Bros. Home Entertain has provided updated details on the forthcoming Batman: The Complete Animated Series collection. The hefty set will now include a digital copy of the remastered animated series. However, the street date for the collection is now October 30, 2018. Click the link below for the all the details and a video clip of the remastered Batman: The Animated Series opening titles.

Well... color me a bit worried... it looks great for the most part but a couple of shots where its supposed to look black, it now looks gray. Especially this one caught me really off guard:

Here's the original to compare

Jaw, meet floor. The colors will be a highlight of the release. A lot brighter, a lot sharper, and to the extent it's different it's because we're getting the "real" picture as it was drawn. I've seen a lot of older anime benefit massively from HD restoration, and I'd say this release is high up there with them

If anything, this puts me at ease. They only could have gotten those details by going back to the original elements.

If you look at the original production illustrations, they match what we see here.

If I had to guess, the 1990s team darkened the original animation or added some kind of filter for a more vintage, silhouetted look.

Would you trust the restoration team to add those filters digitally? They probably could, but I don't know if it would be a good idea.

It's probably best to accept that this new restoration is its own thing. We'll always have the SD DVDs for pure nostalgia's sake.

-batmat- said:
Well... color me a bit worried... it looks great for the most part but a couple of shots where its supposed to look black, it now looks gray. Especially this one caught me really off guard:

Fone Bone
Ordered a drawing board and wooden ruler off Amazon. My Dad's bringing them over on Friday. Itching to try them both. The artwork in The Un-Iverse is about to get a LOT straighter!
Today at 12:38 AM •••

Palk Áron 2002
Since it will be my birthday in 2 days' time, I've decided to virtually slice my profile picture as a birthday cake and give 12 slices, one is kept to me, one to Bloo and 10 slices to my favorite AS members.

wonderfly
I've been playing a ton of "Pac-Man 99" on the Nintendo Switch lately. Still can't seem to get above Rank #30 in a match....

SweetShop209
I just love the reactions to this comment, with some people playing along and others being like "Wait, what?"

DBTrilogy100
I'm one of those Star Wars fans that never hated the Prequel Trilogy and felt it got more hate than it deserved. It wasn't perfect but neither was the Original Trilogy and I felt it did have its strengths.
Tuesday at 11:45 PM •••