Guess I'm starting this one.

HIruzen Sarutobi: "May the will of fire illuminate the village."

Tsunade: "they have what you two lack... THE POWER TO BELIEVE!"

Kakashi: "Do you have use for me?" 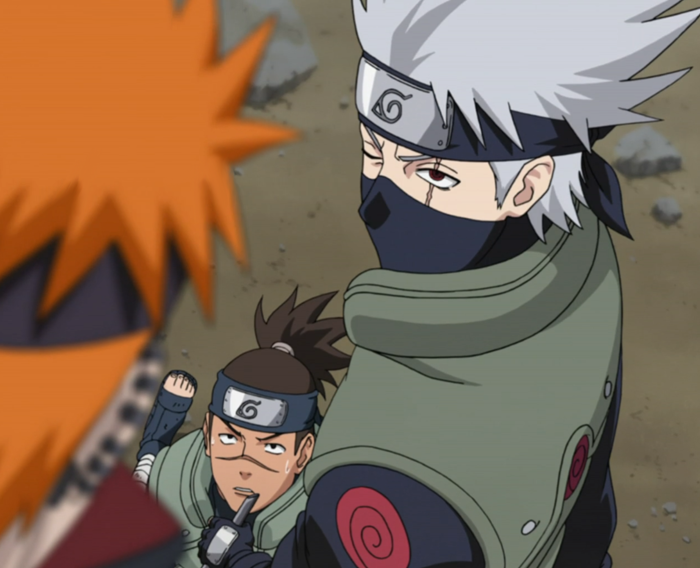 It’s the First!
The ‘Village Elders bug Tsunade’ plotline from the ‘Search for Sasuke v.2’ arc (and the ‘Twelve Guardians’ arc) resurfaces, as Homura and Koharu once again demand Tsunade to keep the Jinchikuri out of the picture (in this case, keep Naruto out of town to prevent Akatsuki capture). An enraged Tsunade forcefully manhandles them, condemning the two for failing to acknowledge Naruto as a Ninja, further humbling them for lacking faith and trust in the next generation. They relent, pretty much ending this subplot.

Kosuke the messenger frog (standing by as a line of communication between the Leaf Village and Mount Myoboku) is secretly killed by Danzo to prevent him from contacting Naruto to return.

A major theme to this arc is that the Konoha Ninjas are willing to sacrifice their lives to protect Naruto, not because he’s the village Jinchikuri, but because he is one of their own.

The Plot Thickens…
Frakasaku believes Naruto to be the Child of Destiny.

Sakura takes over the hospital for the wounded villagers.

Shizune reports her findings to Tsunade; it appears the demodulators carry signals for the six Pains.

Tsunade summons Katsuyu and orders her slug division to make contact with every villager (including the dead ones), empowered by her chakra.

Tendo is about to kill Iruka (for refusing to reveal Naruto’s whereabouts, although it is possible he knows nothing anyway) when Kakashi intervenes.

It’s possible to assume that the Anbu Black Ops agent with the monkey mask is
Konohamaru’s father (and Hiruzen’s son and Asuma’s brother).
Remember When (or Not)
Tsunade remembers when Naruto refused to back down to Kabuto in the ‘Search for Tsunade’ Arc.

There is a past scene of Hiruzen telling a story to Naruto, Shikamaru, Choji, and the others when they were children. The episode suggests this is Tsunade’s memory, although in truth she would not have witnessed such a scene, being out of the village at that time. This could be Homura and Koharu’s memories.

But in the Manga…
The Anime adds a scene of Danzo informing Homura and Koharu about the Akatsuki being responsible for the attack.

The Anime adds a scene of Shikamaru protecting a pregnant Kurenai from a Pain centipede.

The Anime gives Sakura a bad scene where she watches helplessly as civilians get buried in rubble. Then she gets a good scene at the hospital where she regains her composure during the panicked situation and takes over, organizing treatment to the patients.

Choji comes to the Hospital to meet Sakura.

The Anime adds a scene of Naruto continuing to practice Sage mode on a slate atop a spike. Naruto abandons the slate which falls and hits Gamakichi in the head. This is the end of Naruto’s fanservice scenes.

The two aforementioned flashbacks by Tsunade are Anime-only.

The Anime downplays Tsunade’s…chest in its adaptation of the Manga panel where she tells Homura and Koharu they lack something Jiraiya, Hiruzen, and Chiyo possessed (faith and trust).

As this writer hinted in the last episode talkback, the manga organized Iruka’s scenes in the Pain invasion as: 1. Iruka being threatened by Pain/saved by Kakashi, and 2. Iruka seeing Sakura at the hospital. The Anime switches this order.

Kakash gives a speech to Tendo about the Leaf Ninja’s loyalty to their own.

Love, Family, and Friendship
Shikamaru is protective to Kurenai and her unborn child.

Iruka refuses to sell out Naruto.

Danzo is a tool. I cant wait until he gets his.

As if Danzo wasnt enough of a creep already!
You must log in or register to reply here.

SweetShop209
Of the 3 Madagascar shows we have, All Hail King Julien stands out with its title and location. Unlike The Penguins Of Madagascar and Madagascar: A Little Wild, this one takes place on Madagascar while the others are in New York through an alternate continuity. Conversely, AHKJ is the only one to not have Madagascar in the title.
Today at 7:39 PM •••

SweetShop209
Will Disney Junior survive on television? The short answer is yes.

Could Disney Junior Survive On Television? by SofiaBlythe2014 on DeviantArt

CNC
Here's another weekly ideal CN schedule I made, for next week. No longer a "snooze button" all week long.

JoeMabbon
"There's no such thing as a perfect episode."