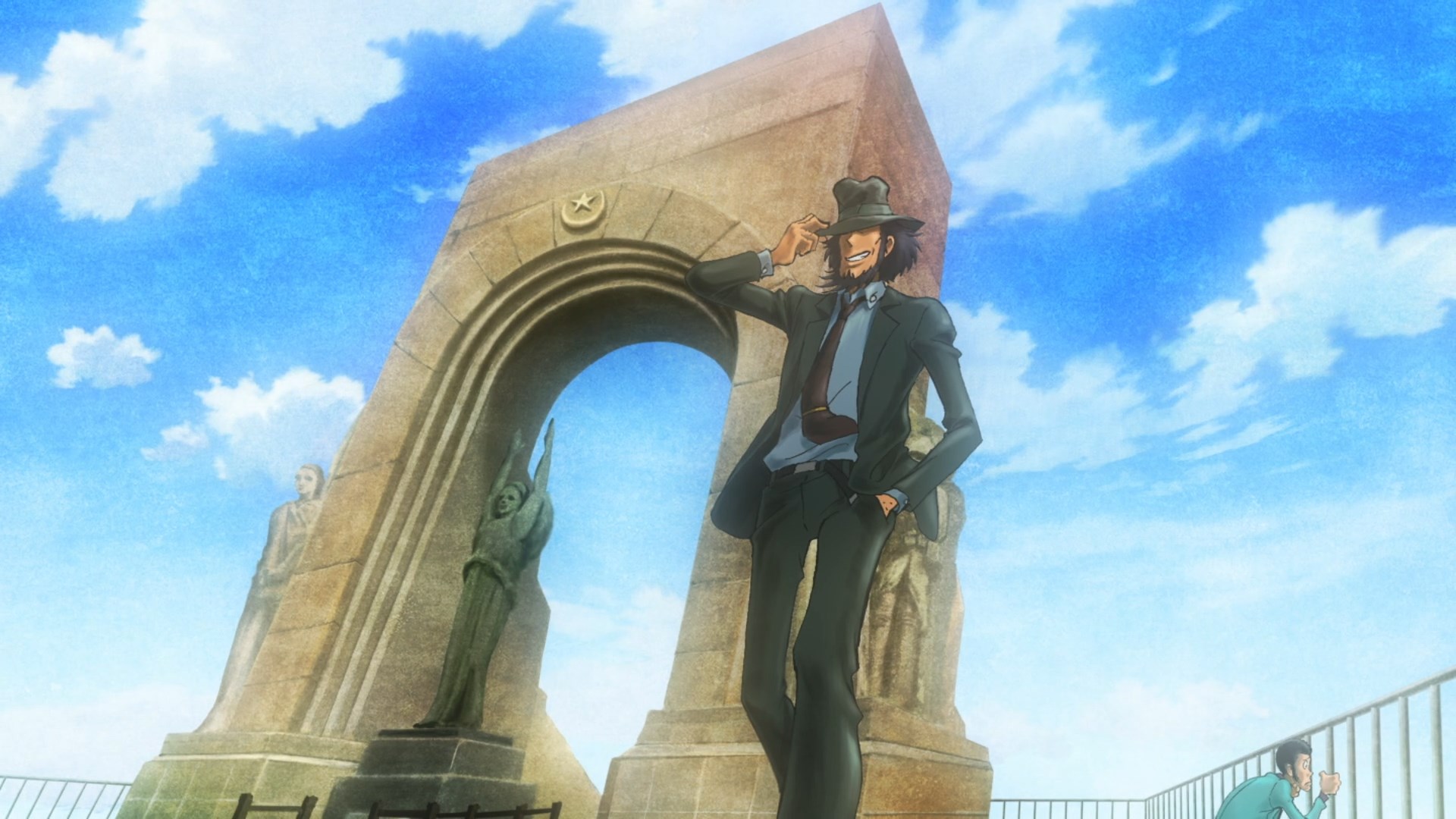 Lupin visits Mattea who is recovering at the hospital, although she is not surprised to learn his true identity. Fujiko arrives to reveal that the group of female thieves is called "Elvira" and their leader is Mercedes Camilo. She explains that their next target will be the Banco Alban Bank in Mexico within five days, but Lupin suspects he is the real objective. On the way, Lupin explains to Jigen and Goemon that Tomoe is not his biological mother, but a teacher assigned by his grandfather to see if he was worthy of the "Lupin" name. He considered her as a mother-figure, however she apparently stole his grandfather's treasure, but was caught and shot, falling to her death. On the day of the raid on Banco Alban, Elvira overwhelms Zenigata and the police force with tanks, successfully robbing the bank, but Jigen plants a tracker on them. Lupin and the gang break into Elvira's hideout, and after several attempts to outsmart each other, Lupin defeats Mercedes and reclaims his treasure. She claims that she was also trained by Tomoe, whom Lupin now suspects faked her own death. Zenigata arrests the Elvira gang, while Lupin allows Mercedes to live, however he vows to find out if Tomoe is alive and the truth about the night she apparently died.
This time:
Lupin's latest scheme targets a bride with a familiar face.

I love it when they make it this easy.

Last time: Let's get you back to the home, mother.

Is Jigen reenacting the first scene from Cowboy Bebop?

Previously on Lupin III: Lupin family backstory. Don't get that every day.

Lupin, when did you go after married women? And not covet their jewelry?

Knowing stories like this, she's probably after his fortune or something.

Holland fell off the deep end after Gekkostate broke up.

Dang. Jigen's got some muscle on him.

Does she always go after anyone who's injured?

This poor woman! She keeps running into half-dead guys and has to nurse them back to health.

Kidnapping people and never returning them seems like a bad business model. Won't someone catch on eventually?

We're getting a whole season's worth of hatless Jigen in this episode.

Is it ethical for a doctor to get romantically involved with their patients?

Oh sure, and then she goes and finds another injured guy to nurse back to health and fall in love with.

marklungo said:
Kidnapping people and never returning them seems like a bad business model. Won't someone catch on eventually?
Click to expand...

Being an identity thief would be much more lucrative.

"Hope you remember what your own metal tastes like when you get to hell!"
Except he can't really taste it since you stuck it in his neck.

"I'll make sure you taste that woman's blood, Daisuke Jigen!"
What, are you gonna make him drink it?
Last edited: Aug 7, 2022

Ain't that just like a mook? Bringing a knife to a gun fight.

"In that sense, we're the same. In every other sense you're just a bunch of filthy peasants."

And since Jackal isn't an ordained minister, their marriage is technically invalid.

So Jigen killed the entire gang -- except for the one guy he really needed to kill. Nice job!

Clever, using the fireworks to hide the gunshots.

You're lucky. You're one of the few people who have ever seen Jigen's eyes.

Nice of her to just give away her wedding gift like that.

And nobody questions what happened to the priest.

Jigen's heart will go on.

He could have used the jewel to finance her medical practice or given it to charity or let Lupin keep it, but no -- he just had to make a big show of how little it meant to him. Sheesh.

DEDICATED TO THE MEMORY OF
KIYOSHI KOBAYASHI
A.K.A. DAISUKE JIGEN​
You must log in or register to reply here.