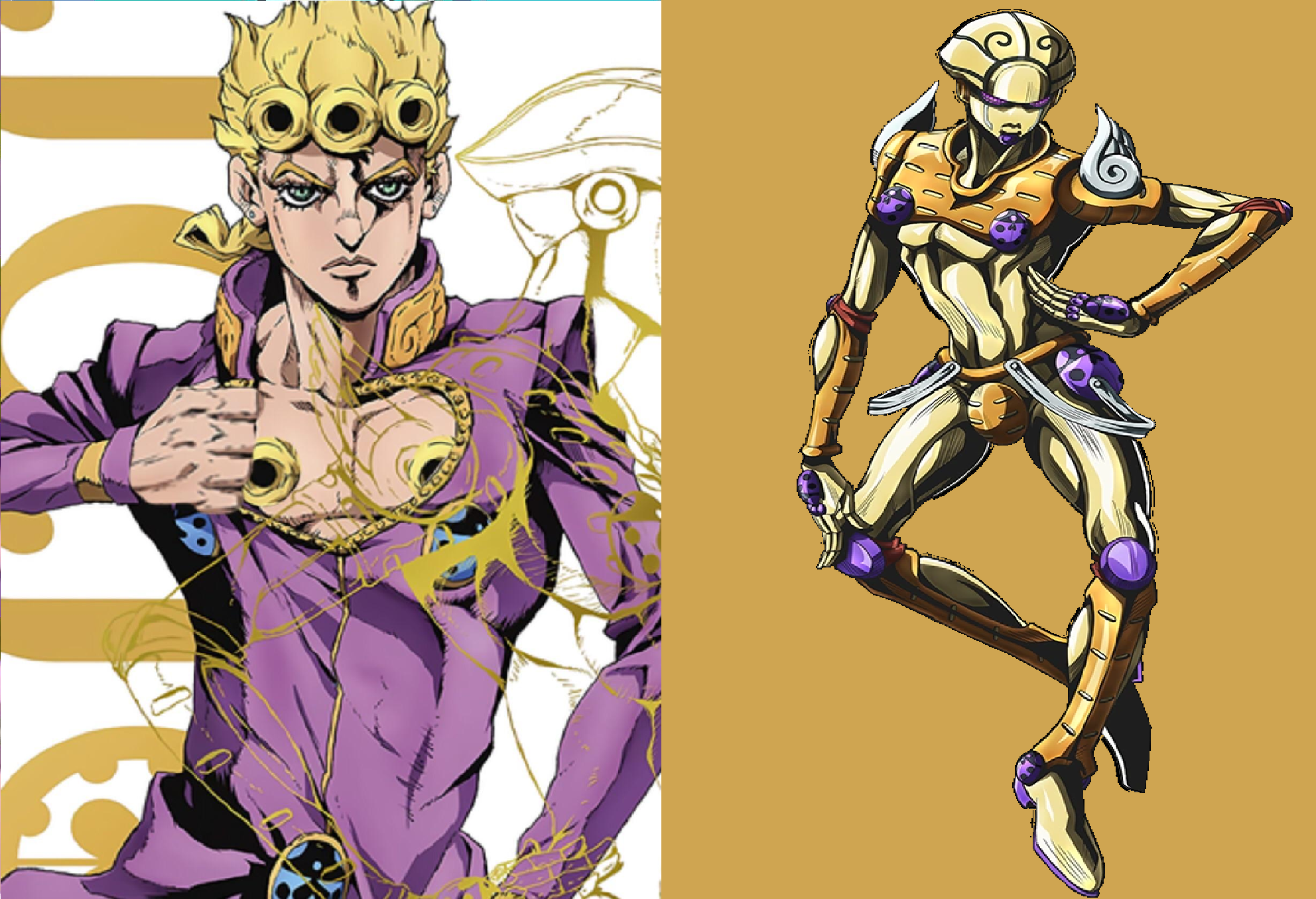 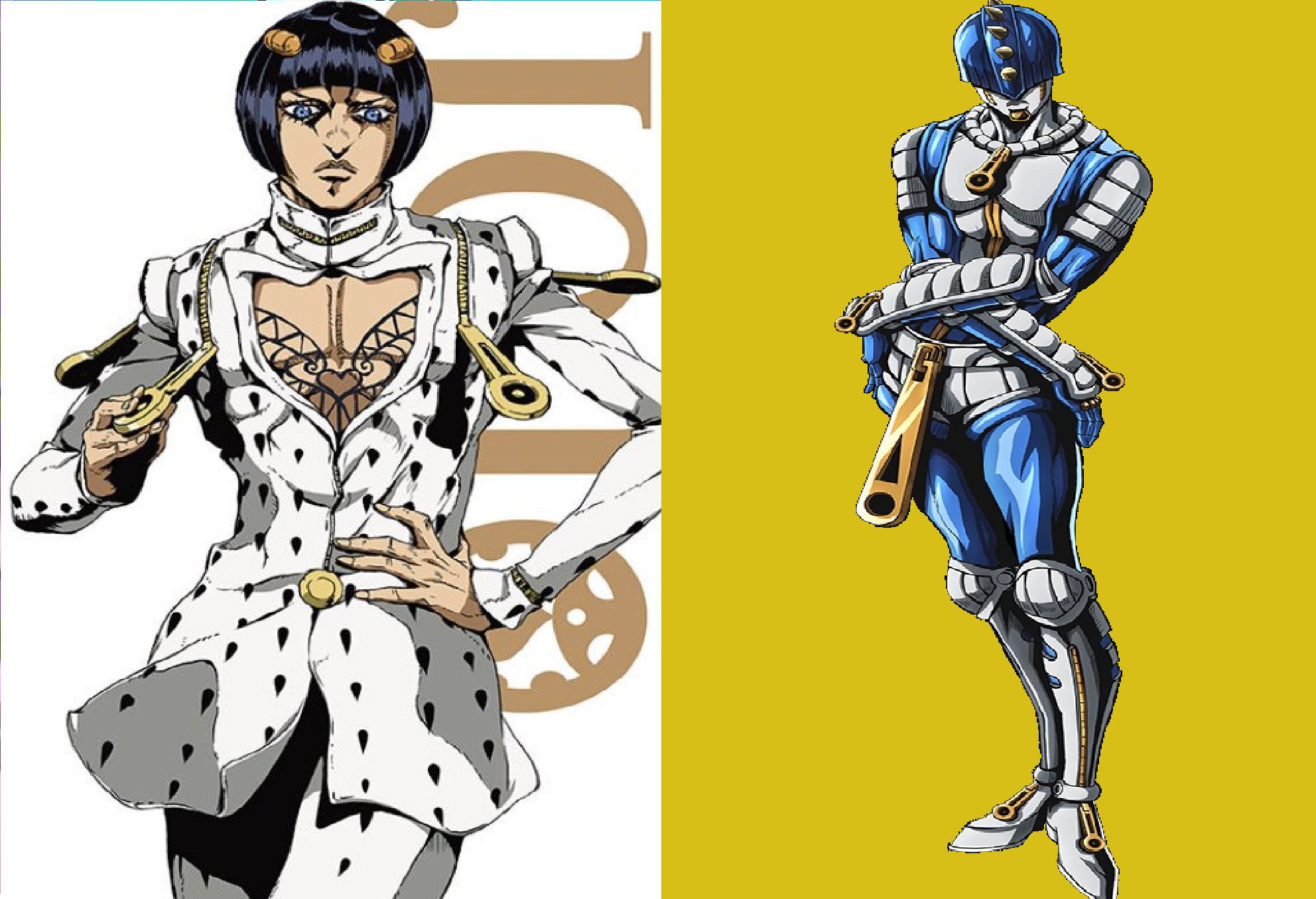 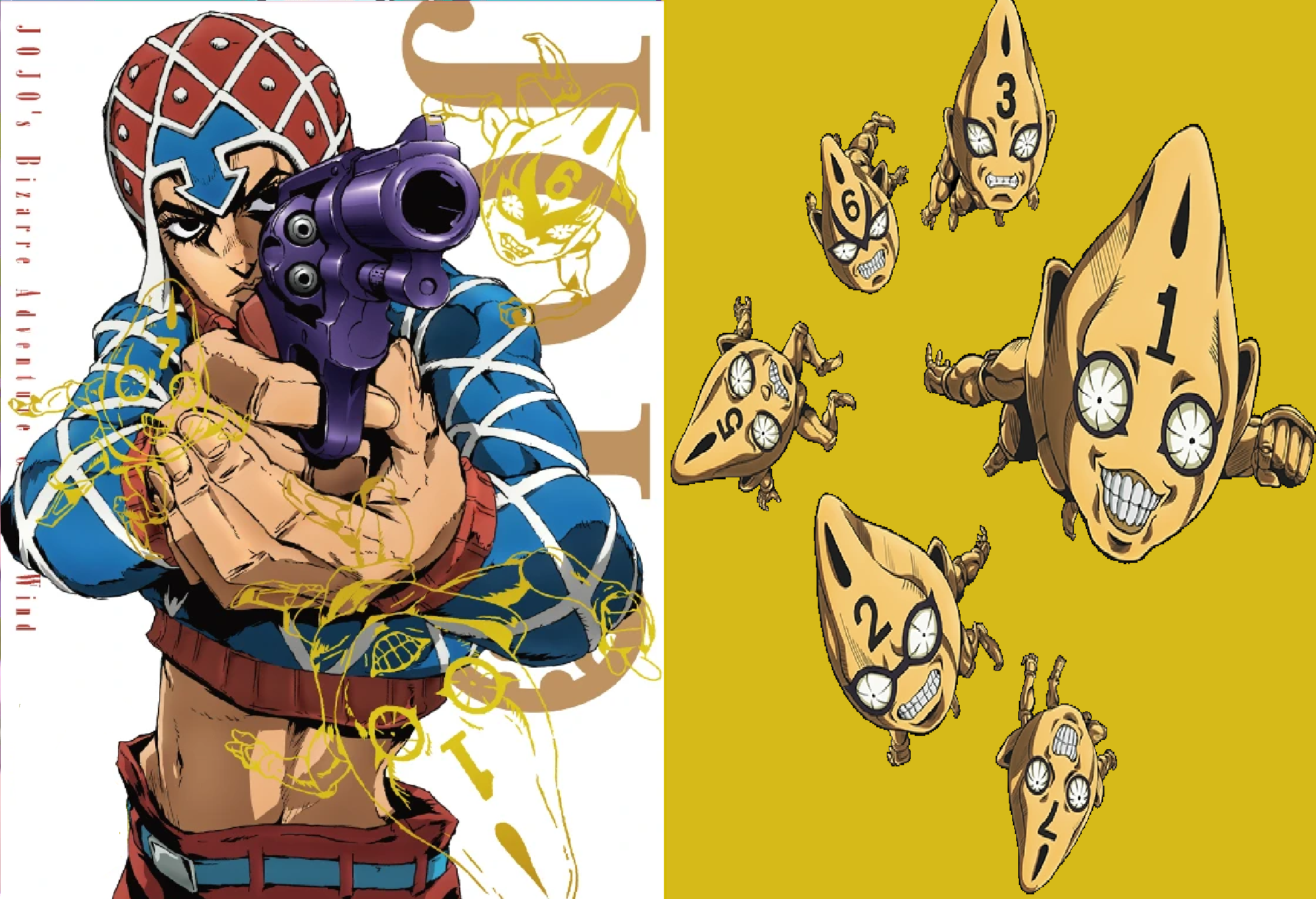 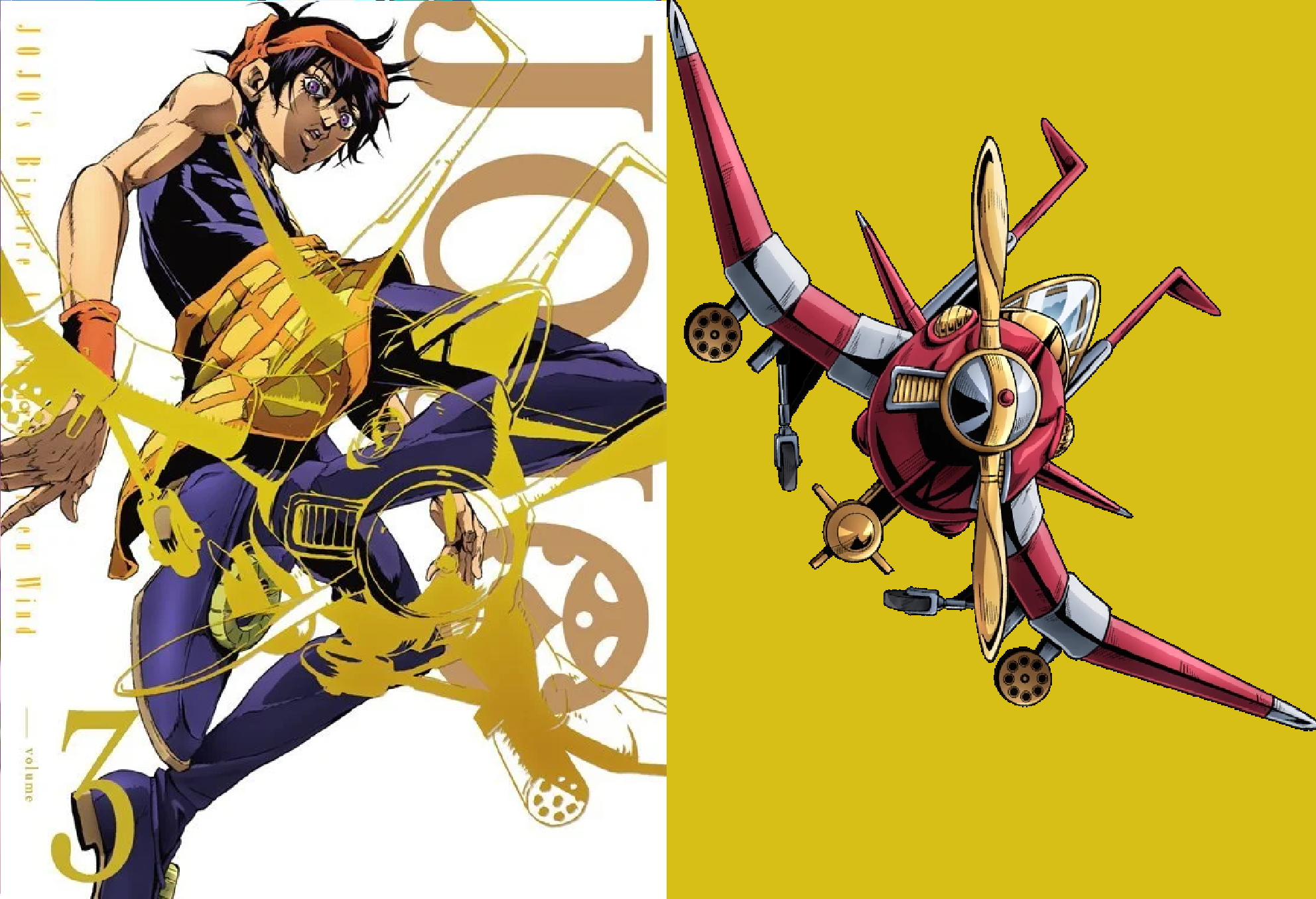 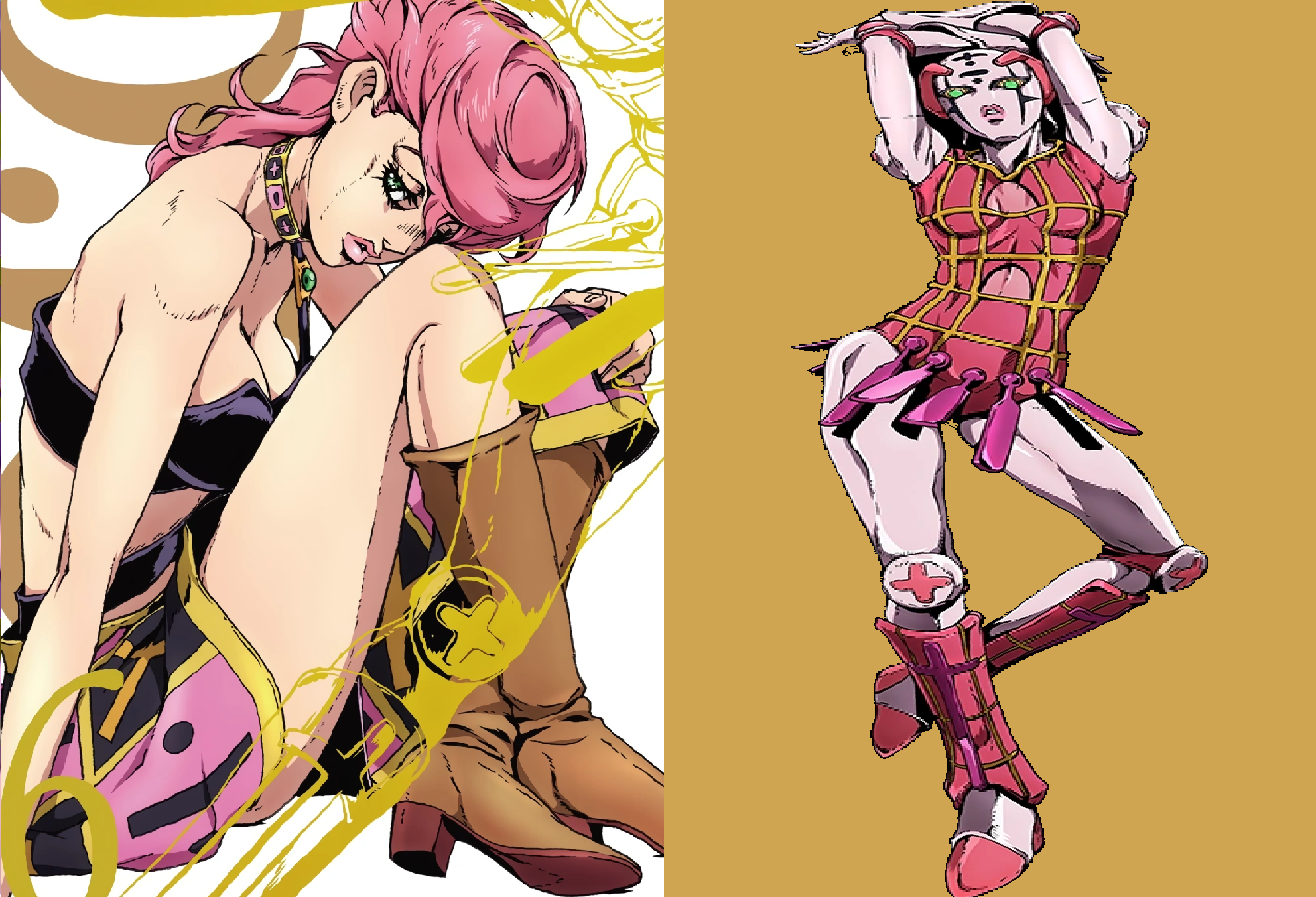 Trish Una
Voiced by: Lizzie Freeman
Stand: Spicy Lady (JP: Spice Girl)
Ability: Softening
Stats: Destructive Power - A / Speed - A / Range - C / Persistence - B / Precision - D / Developmental Potential - C
Namesakes: Trish Gott (American model) / “una” (Italian for “one”) / Spice Girls (British pop group)
The estranged daughter of the Passione’s boss, Trish never knew her father and lived the first 15 years of her life with her mother until her passing. After this, she found herself placed under the mob’s protection, switching hands until winding up in the care of Buccarati’s group. Now she is targeted by her own father and his personal assassins, who intends to snuff her out to ensure his identity remains secret. While on their journey, Trish has manifested her own Stand, Spicy Lady, who has the ability to soften any material it touches into a rubber-like consistency. 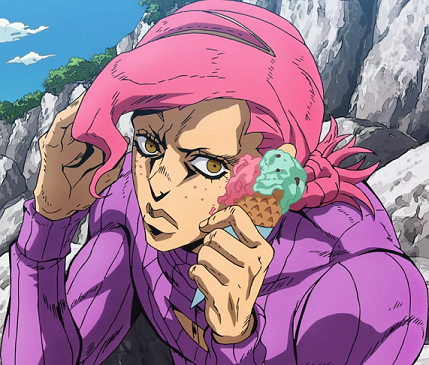 Vinegar Doppio
Voiced by: Griffin Burns
Stand: Epitaph (sub-ability of Emperor Crimson)
Ability: Precognition
Stats: Destructive Power - A / Speed - A / Range - E / Persistence - E / Precision - Unknown / Developmental Potential - Unknown
Namesakes: Vinegar (aqueous solution of acetic acid, often used in flavoring food) / Doppio (Italian for “double”) / Epitaph
Vinegar Doppio is the consigliere, underboss, of Passione, being the only one in the organization to report directly to the Boss and send out his orders. To most, Doppio appears to be a meek, cowardly teenager, and for the most part this is true. But when it comes to the Boss, Doppio is fiercely loyal and will do anything to serve him. In actuality, however, Doppio is really the Boss’s alter ego, a split-personality which allows him to move undetected while maintaining his anonymity. Doppio is completely unaware of this, but receives orders by talking to the boss through random objects that he believes are telephones. Doppio is able to use a portion of Emperor Crimson’s power, namely the precognition ability of Epitaph to see five seconds into the future, as well as briefly materialize Emperor Crimson’s arms for self defense. 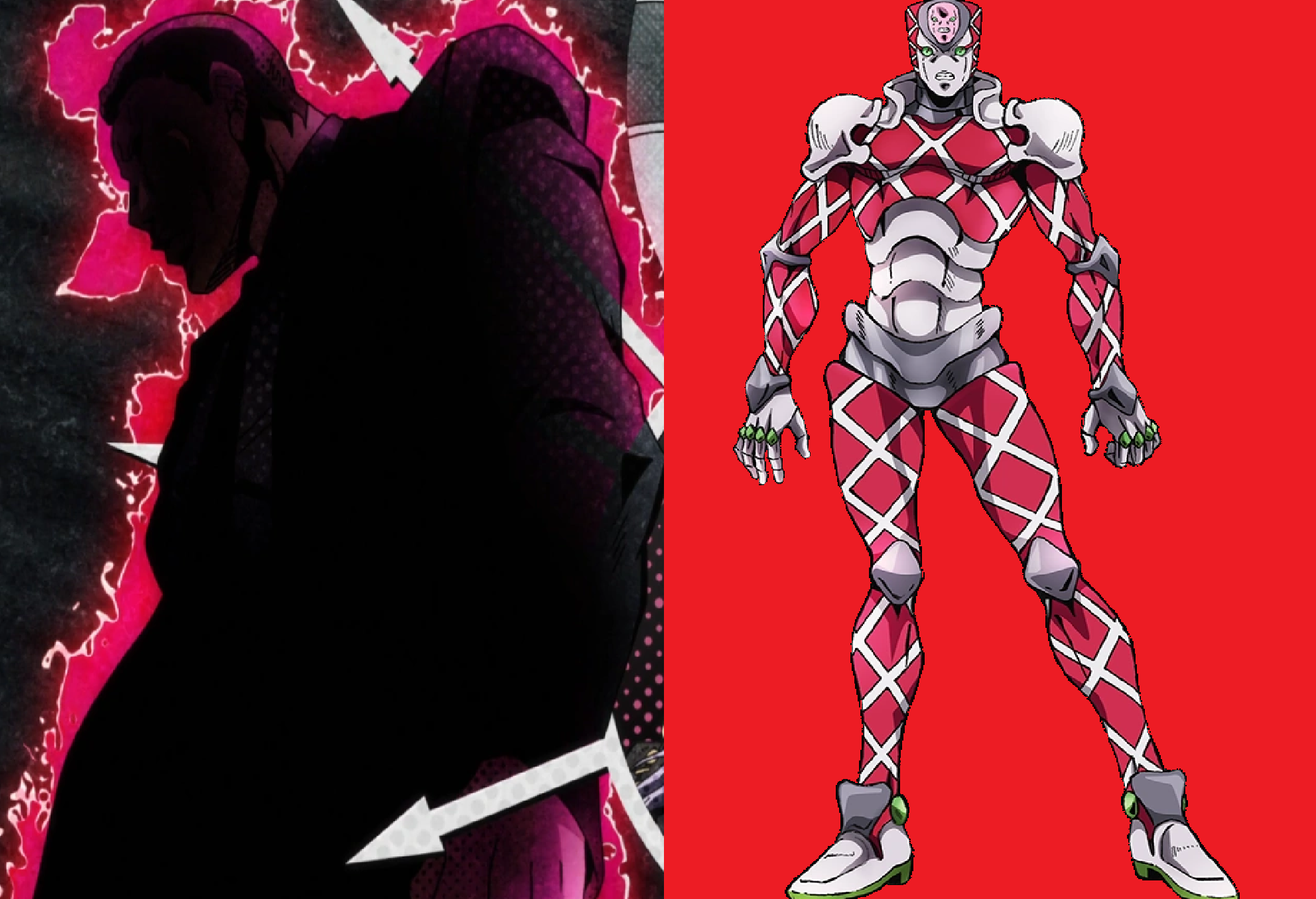 The Boss
Voiced by: Kellen Goff
Stand: Emperor Crimson (JP: King Crimson)
Ability: Time Erasure and Precognition
Stats: Destructive Power - A / Speed - A / Range - E / Persistence - E / Precision - Unknown / Developmental Potential - Unknown
Namesake: King Crimson (British rock band)
The Boss (real name unknown) is the elusive leader of the Italian mafioso gang known as Passione. His identity is a complete mystery that he intends on upholding at all costs, which has now been threatened upon the discovery of his long lost daughter Trish. His Stand, the terrifying Emperor Crimson, has the seemingly unstoppable ability to perceive ten seconds ahead into the future and erase the events that would have transpired during that time (example: If someone tries to shoot the Boss with a gun, the Boss can erase the moment that the bullet would have pierced his body and remain unharmed). No one other than the Boss is able to remember or perceive those ten seconds, and only the Boss can alter events during it. 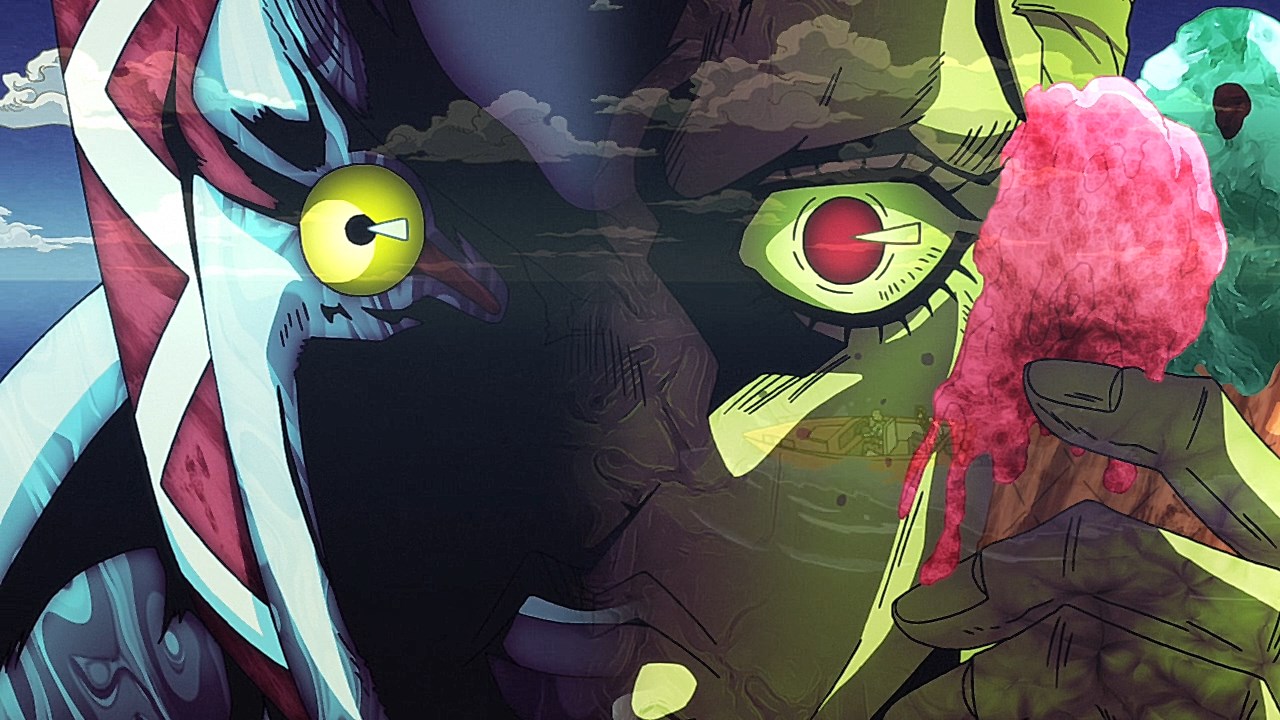 Risotto used his last bit of strength to grab the boss and attempted to trick Lil' Bomber into shooting the both of them, but Emperor Crimson erased the time in which the bullets were shot to avoid them, killing Risotto. The boss ate a nearby frog to regain some iron as Bucciarati and Narancia headed to the scene of the battle. Bucciarati and Narancia saw Risotto's corpse, then unexpectedly found a young boy tied behind a rock and missing blood, with his lips sewn together.

Meanwhile, Abbacchio used Moody Jazz to search through the past on the Costa Smeralda beach, trying to recreate the boss's face. After a while, he became distracted by a group of young soccer players trying to retrieve their ball from a tree. When he went to help them, he was mortally wounded by the boss, who impersonated one of the young boys. As Abbacchio died, he entered a dream-like state where he reunited with his deceased partner from the police force, who commended Abbacchio for his diligence in helping his friends.

When Bucciarati's group came across Abbacchio's corpse, Giorno discovered that just before Moody Jazz disappeared forever, Abbacchio used it to successfully recreate a death mask of the boss's face in a nearby stone pillar.
Now:
While Bruno and the team analyze the face and fingerprints left behind by Moody Jazz, they receive a mysterious call which leads them on a race to the Roman Colosseum.

This week’s Jukebox is "Rotting” by Green Day.

Previously on JJBA: Risotto rides the lightning, and Abacchio goes into the night (in white satin)

Wow. I finally have something to watch and comment on. Been a while.

Diavalo. Now there's a name you can trust.

Thank the maker this show is back. I had almost considered finish it on Crunchyroll.

I feel a presence. A presence I've not felt since...

Are you any relation to Radical Edward?
Reactions: marklungo

It always looks like to me that Bucciarati has giant pill bugs in his hair.

"You must come to Rome. Don't worry, all roads lead to it."

He turned that ice cream cone into an ice cream phone.
Reactions: marklungo

You won't give your name? Then would you say you're...anonymous?
Reactions: marklungo

Kitschensyngk said:
You won't give your name? Then would you say you're...anonymous?
Click to expand...

All that needs to be done for now is to recognize that voice.

There's another way to get brain freeze.

Isn't this the plot of The Thing?

So...Stands are the result of an alien space virus? Sheesh. This is like Midi-Chlorians all over again.
Last edited: Sunday at 12:59 PM
Reactions: marklungo

Another clue to who is on the line.

Nobodyman said:
It always looks like to me that Bucciarati has giant pill bugs in his hair
Click to expand...

Mista looks like a deck of playing cards, Giorno's hair looks like he has cannons sticking out of his head...

So a film crew in Greenland tried to remake Akira?

So stands come from space?

Three can learn the truth of the arrow if two of them are dead.
Reactions: marklungo

And here you go. Stands are caused by midichlorians an alien virus. At least the ones created by the arrows.

Nobodyman said:
So...Stands are the result of an alien space virus? Sheehs. This is like Midi-Chlorians all over again.
Click to expand...

I assume these drunks will be the next to die.

And make sure the lens cap is off.

A mad doctor and one of the Insane Clown Posse.

THERE'S A STAND ON THE WING OF THE PLANE!
Last edited: Sunday at 12:50 AM
Reactions: marklungo

Now you know who's responsible for the deaths of the those two guys from the rival group.

Even Josef Mengele is looking at this guy and going "Yikes!"
Reactions: marklungo

Blow the wind of God on this, Kenneth Copeland.

The doctor is in, apparently.

How quickly can you learn to fly?