Gon Freecss
Voiced by: Erica Mendez
Gon is a young boy from Whale Island who became a Hunter to venture the world and find his father. His quest eventually led him to meet a Hunter named Kite and become involved with a battle against a destructive species known as Chimera Ants. The war against the Ants was long with many casualties, including Kite, which drove Gon to the breaking point in which he sacrificed his ability to use Nen to gain a temporary boost of power strong enough to take out one of the Ant King’s Royal Guard. In the aftermath, he has fallen into a coma with life-threatening injuries.

Killua Zoldyck
Voiced by: Christina Vee
Killua is the youngest son of the Zoldycks, a family of assassins known the world over. After meeting Gon, the two quickly became best friends and he followed alongside Gon at every turn of his journey. He also overcame personal obstacles in the fight against the Chimera Ants, but became incredibly distraught as he gradually saw how damaged his friend had become at the same time. With Gon now hospitalized, Killua is seeking out any way he can to heal his friend, even if it means rekindling some old family ties.

Hisoka Morow
Voiced by: Keith Silverstein
An intimidating and mysterious character, Hisoka is bloodthirsty and willing to kill whoever he has to in order to advance his questionable goals. For a long time, his primary target has been the Phantom Troupe’s leader, Chrollo Lucifer, whom Hisoka wishes to fight to the death. After the battle in Yorknew, however, Chrollo was left unable to use Nen thanks to Kurapika and went into exile until he could recover it. Since then, Hisoka has been obsessed with finding where Chrollo had run off to, an obsession that left him M.I.A. during the Chimera Ant incident. With strong Hunters from around the world gathering for the election, Hisoka has reemerged and is catching up on the events he missed, including Gon’s current condition.

A group of strong Hunters who were appointed by Netero to act as his counselors (and sparring partners), including deciding who will fill in to replace him.
(Detailed bios in spoiler box, listed left to right): 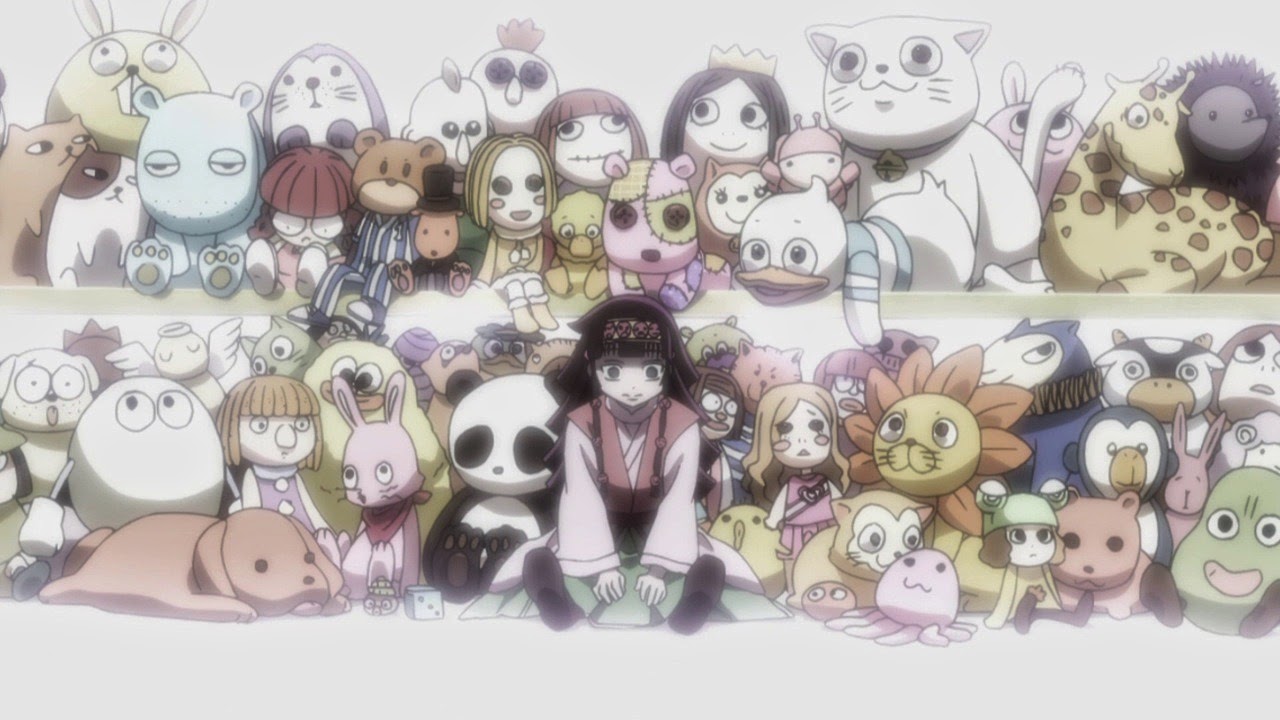 Couldn't she just send them into a cornfield?
Reactions: JoeMabbon and marklungo

Ah, so that's why big bro wants to kill a sibling.

Ok, so Killua just has to fulfill the 3 demands and heal Gon. Seems too easy... yeah, either those demands are going to be HXH style nutty and/or Killua is going have to fight Illumi and Hisoka. So things should be ramping up with the show again. Should be a nice balance between this and the politics of the Hunter Organization.
Reactions: Light Lucario and Lawren22

Okay as much as people were creeped by Promised Neverland's premiere, I think this episode and Alluka exploding people to bloody chucks was even creepier. The next episode should be really interesting. Sad this show's in the deathslot.
Reactions: Yojimbo

Also, that look Cheadle and Pariston shared, either they're madly in love or consumed with undying hatred for each other.
L

Yeah,Togashi loves horror( Alluka's character has some cosmic horror vibes)and is pretty good at using it when he wants to ,he keeps that going.
Reactions: Yojimbo

I thought that this episode was pretty good. Pariston still came off as a giant creep during his meeting with the other Zodiacs and based on that flashback with Netero, he hated Pariston too. It was quite a poor decision to leave him in second in-command for that reason, but it was fitting for Netero's personality.

At first, I thought it was a bit excessive for Killua's father to lock Alluka deep underground and to not even consider her human, let alone part of the family. But then the backstory happened. I'm not sure what ability she has, but it must be powerful if she can virtually grant any wish, even with how the demands get harder depending on the wish involved. Seeing those servants being crushed was extremely brutal, possibly one of the more intense deaths in the series. While it is sweet that Killua still cares about her, that power does make her more dangerous. She can unknowingly kill people and even granting one wish could lead to a lot of innocent people dying. Killua being willing to do whatever it takes to heal Gon is touching, but it does put him and other people at risk as well. Overall, it was a pretty good episode.
Reactions: Yojimbo and Lawren22
You must log in or register to reply here.
Share:
Facebook Twitter Reddit Pinterest Tumblr WhatsApp Email Link

K
kanc
According to zap2it, it appears all Nick channels on Sat Jul 25 will air Christmas episodes/specials
Today at 9:19 AM •••