A fan of Gwen Tennyson and Linus Van Pelt

Time Crisis : That was a fine episode. Remmy's future thoughts were funny, and interesting, I like how he thought of everyone having the same head but bigger body. He had a planned death date and time , that was something. Cricket future having just longer legs was also funny. Well done to say well, not everything has or can be planned out. Ranch pass the censors jokes. To be honest, Remmy's family is wealthy so he would be at least somewhat more comfortable in general.

Gramma Driver: Alice will get you where you need to go , really fast, at least. I like the car being called an Abraham. The couple who Alice ends up being their get away driver was great, and being team Rocket inspired was even better. Cricket, isn't a good phone pranker or that bright so Gloria got him good. Tilly's part was weak , but the way there we setting it up, they really just needed her to be there to stop the criminals. This was a fun episode.
Reactions: Zanneck and RainbowCupcake
C

RainbowCupcake said:
So Bill ended up paying $200 for their smartphones? That's relatively cheap for a smartphone these days!
Click to expand...

He mentioned there was a sale at the beginning of the segment.
Reactions: RainbowCupcake

Marieve Herington mentioned in this article how she co-wrote an episode that's coming out in the fall . It's Present Tense. 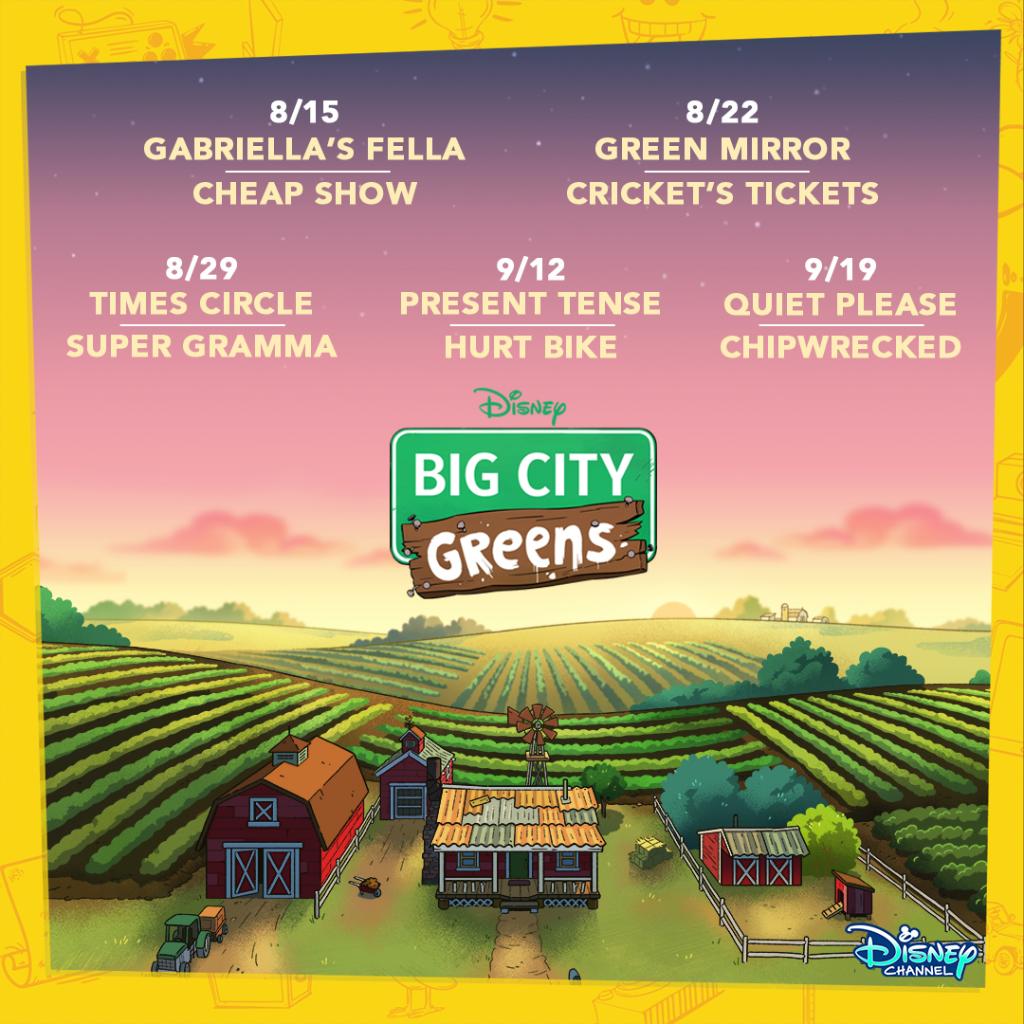 Friend Con: Great episode. I'm glad that the plot of Chip's antagonism and the Green's finding out wasn't dragged on. It was also nice to see that Bill actually has a friend. And this guy seems to be as boring as he is. I did predict that Bill's friend would show up, but I didn't expect him to be the guy Cricket pointed at the beginning. Chip didn't chip that new tooth, but he did lose a bunch of other teeth, which serves him right. I wouldn't be surprised if his constant dental bills don't put him out of business.
The only dislike was Alice Green stealing from everyone, but at least she had to sacrifice some of her swag for her son.

FlimFlammed: This was even better than "Friend Con". Cricket sure got swindled,(it was nice that he returned someone's dog without expecting a reward), shame that he swindled Gloria so he get double the money. I loved Bill's reaction of Gloria trying to drag Cricket out of his secret exit. Gloria must've been very desperate for those tickets to fall for Cricket's scam. I also loved how the scammer got what he deserved in the end. Like Remy, Gloria's acting has also improved(seriously, she was overacting the first time we saw her "act"). It was also real nice that Cricket gave her all of the money. He still got his wedding cake anyway(that kid loves himself, way too much), so he still technically got his "double the money" anyway, and this time, he's actually earned it.
Reactions: Zanneck
C

"Filmflammed" reminded me of a Hey Arnold! episode.

I hope this is not the last we see of Aston. A little boy that plays with dolls openly is a unique character trope.

zoombie said:
I hope this is not the last we see of Aston. A little boy that plays with dolls openly is a unique character trope.
Click to expand...

He only appears as a guest character. Just ask the rest to what happened to the rest as to why they haven't appear after their first.

I sawed this boat in half!

"Greens' Acres:" Sweet episode. I loved seeing Bill and Nancy as kids, as well as some other side characters such as Remy's dad and Officer Keys. It's sad to know that Bill's dad died when he was so young. I also appreciated that the episode ended in a realistic way with Alice having to sacrifice a bit of her farm to keep the family going. Still, I liked that there was a positive twist to the outcome, as present-day Alice mentioned that it was "worth it" for her family.

Did anyone else find it weird that Bill and Nancy were locked up in an actual jail cell, even just for a short time? I know it's a cartoon, but isn't this illegal in real life?

"Dolled Up:" Hilarious episode. The writers were spot on when parodying the American Girl store. My favorite plot was Cricket "becoming" a doll and the creepy little girl trying to play with him. Bill's dollhouse getting destroyed and him shedding a single tear over it was also pretty funny. Poor Bill. It was nice seeing Adam McArthur (Marco from Star vs.) return to Disney Channel for a VO role.
Reactions: NeoplanDan and Zanneck

Preview clip for this week.

TV Tropes is Ruining My Life!

I have to say that "Cheap Show" felt like an episode that trolls the audience.
Reactions: Zanneck and RainbowCupcake

So the Japanese man, the dialogue he said, does that translate to "something in Japanese?"

"Cheap Show" is probably the funniest and very sitcom-ish episode of this week. It feels like the writers were trying to do all meta clichés every TV show did before in one, clip-show, reading own thoughts in mind, lights-out stituation and even celebrity guest star cameo (Tom Hanks off-screen).

I liked how Tilly tells her story in storyboard style, and the litteral fourth wall break gag got me off-board.
Reactions: Zanneck and NeoplanDan
G

TV Tropes is Ruining My Life!

So, people. This or Quack Pack?

I sawed this boat in half!

"Gabriella's Fella:" So Cricket's been constantly thinking about Gabriella since the dance? That's the first time we the audience have heard about this. Anyway, this episode was cute. Remy giving Cricket all the (wrong) things to say reminded me of Patrick helping SpongeBob drive in "Boating School." Looks like as of this episode, Cricket and Gabriella are a thing. I hope they develop her more in upcoming episodes. So far, she's been kind of bland. I giggled at Cricket saying "trash butt."

Vasquez has a crush on Remy's mom? That's...a bit creepy.

"Cheap Show:" A very unique episode. At first, I was concerned that it WAS going to be a clip show episode, but as soon as Cricket broke the fourth wall, I knew they were going in a different direction. They certainly crammed as many tropes into the episode as they could. The ending was my favorite. "Tom Hanks" making a celebrity appearance was hilarious. As creative and entertaining as this episode was, it did feel a little all over the place with its plot.
Reactions: Perla Magica

Normally, I rarely give a review on most of its episodes but might as we review on this.

To Me: I liked Cheap Show a bit, but only the part where Tilly did her storyboarding, the 4th wall and the part where Tom Hank's offscreen voice appearance. I felt like a lot were talking about that than "Gabriella's Fella" (which I'm bet to speak on that as well) TBH. But now getting that episode. TBF, the episode was minimal to none as the only good parts are Tilly's subplot of this episode of her trying to run as Community Tilly (as what she is trying to do). But other than that. The episode isn't my cup of tea after learning a bit from Gabriella, by having her limited into one small thing that her and Cricket have in common, to which it gives me that "What? That's it

" look and feel. I would say this is a bit of disappointment, but not worse as "Wild Side".

“Cheap Show“ is definitely one of my favorite episodes of the season. I liked how unique it was from other episodes. Plus the 4th wall breaks get me everytime, as well as getting to hear Tom Hanks at the end.
Reactions: RainbowCupcake

Gabriella's Fella: This was mostly an awkward episode. It did get better after halfway through. The whole thing of Cricket being unable to talk to Gabriella was just hard to watch(along with Remy's bodyguard having a crush on his mother). But I did enjoy when they started getting along, and it was funny that Gabriella knew that Cricket was talking with Remy all this time. We see Tilly's hunger for power again, that girl should never be in charge of anything power-related.

Cheap Show: Bill seems to represent the people that made this episode. This was a hilarious episode, and I think they used up the budget to have Tom Hanks voice himself off-screen(obviously they didn't have enough to show him )
Reactions: RainbowCupcake and NeoplanDan

Titltes and log-lines for September.

“Present Tense” – Cricket struggles to get the best birthday present for his best friend, Remy.

“Hurt Bike” – After almost getting in a dirt bike accident, Cricket decides to live his life in shelter.

“Quiet Please” – When the Green’s visit the library, the librarian threatens to throw them out if they make a sound.

SweetShop209
Here's something interesting. I found this picture from San Diego Comic Con from 11 years ago. It's from the panel for Batman The Brave And The Bold. Diedrich Bader holds up his son, who's dressed as Moon Knight. And then 7 years later, he would voice him on Ultimate Spiderman.

SweetShop209
We have a tie due to both episodes getting 2 votes. I'll be tiebreaker, and pick "Blood Moon" to move on. The last matchup is monstrous sleepovers. We have the DC Superhero Girls episode "Living The Nightmare" and the Amphibia episode "The Sleepover To End All Sleepovers" .


Today at 5:59 AM •••
R
rwinger24 Moleoman rwinger24 wrote on Moleoman's profile.
I have a Discord invite for you.

I like to help build on your Production Music fandom page.