I actually liked that.

I feel like Jason's behavior seems much more sinister here than he was acting behind the scenes in earlier issues. Maybe that's a huge mislead on his intentions. But I actually think things could go either way.

The last couple of issues have been total messes, so it was nice to read an issue I enjoyed. ****.

I've got caught up on the series before the last issue this week and as interesting and mostly enjoyable this book has been it definitely reminds me how much of BTAS and the DCAU were a collaborative effort and how a lot of that was the right people at the right time making the right choices and that's lacking a little bit here. I'm not so ridiculously obsessive about canon as most folks are but it's gotten a bit distracting here to the point where it seems more important than the story itself. It doesn't have that seem feeling as most other DCAU/BTAS books and shows have. Even Batman & Harley felt more "on brand" than this does and I don't think I'm ever going to get over Batman kicking over Nora Fries' dead body. It's great having Dini and Templeton back but something about this whole series has felt off. I do want to see how this all wraps up but this series is heading for a good read but one that's still disappointing. 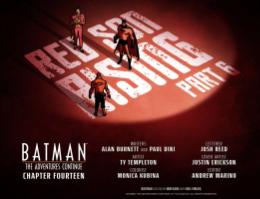 The Story: The Red Hood's plan against the Bat-Family comes to a head as he offers Batman a choice: kill the Joker or Robin dies!

Discuss the final issue (for now) of Batman: The Adventures Continue right here! What did you think? Share all your thoughts right here!

Did anyone find the moment when Batman was mocking Jason (''For a weak, immature Robin, maybe'') and then immediately tries to keep him focused when Joker does it (''Don't let him get to you''), a little strange?

I honestly feel Batman's ''voice'' has been a little off during this series. However, Dini doesn't disappoint with his Joker. Still as fun as ever.
Last edited: Oct 16, 2020

Staff member
Administrator
Moderator
Reporter
Surprise! DC Comics is extending Batman: The Adventures Continue for at least one more month - again! Issue #8 hits comic shop shelves in January 2021! Get all the details, and much more, at The World's Finest!

Staff member
Moderator
It's one of the better issues and the inclusion of Slade and Sunny wrapped things around nicely, but it's still a pretty abrupt ending and I don't like how the series handled Jason Todd. Rather than do something unique that covers similar emotional beats, it's pretty much a recreation of the same story but with a less sympathetic Jason. The comic being tongue-in-cheek about it also being Tim's backstory doesn't make it better. Bruce mocking Jason for a bit also rubbed me the wrong way. So did Straightman suddenly coming back to life to save Joker.

I also noticed that, despite Dick being put in multiple covers and mentioned a few times, we never actually got to see him. I guess there's the bonus Christmas story coming out, but I'm not holding my breath.

James Harvey said:
Surprise! DC Comics is extending Batman: The Adventures Continue for at least one more month - again! Issue #8 hits comic shop shelves in January 2021! Get all the details, and much more, at The World's Finest!
Click to expand...

I guess they couldn't resist doing a Harley and Ivy story .

Staff member
Moderator
Heading into this finale, I was starting think this could have just been the last 3 issues. We didn't need 7. But then the epilogue. So Deathstroke wins ultimately?

I did like that without the utility belt, Batman had to resort to mind games to keep Jason focused on him while Tim deciphered his wording and escaped and helped end things. Joker was amusing as usual but got a bit dark with him getting shot in the arm and a bit of foreshadowing with him admitting he added some tech to Straightman's head -- since we all know what happens to Tim eventually.

I had a feeling we'd have an ambiguous death fall but I didn't think until the end, it would be another sewer death fall. <cough>MOTP<cough> Big debris takes out the big strong guy also seems like something from B:TAS. lol. It was interesting Tim Drake was involved in this version of the Red Hood story but too bad Batgirl's involvement was spotty. Really, they didn't think to search the boat passing through the harbor in plain view of them? I was also a bit surprised there wasn't some scene of them unpacking and talking in the Batcave but eh.


M.O.D.O.K. said:
So did Straightman suddenly coming back to life to save Joker.
Click to expand...

I don't think they outright said the chandelier killed him.

I also noticed that, despite Dick being put in multiple covers and mentioned a few times, we never actually got to see him. I guess there's the bonus Christmas story coming out, but I'm not holding my breath.
Click to expand...

I'm going to assume he's been starting to split his time between Gotham and Bludhaven until finally moving to Bludhaven outright closer to the events of the ROTJ flashback. And in the couple weeks these issues take place roughly November-December, Nightwing was in Bludhaven working a big case of his own or was even out of state. And no one bothered to (or would) ask him for help. I mean, Alfred should have and would have but... idk, Nightwing was incommunicado for whatever reason - undercover, etc.

Staff member
Moderator
As far as a DCAU adaption of Under The Red Hood (which this basically was), I thought it was okay even if it ultimately was pretty predictable if you'd seen the original aside from the nods to Return of The Joker.

I like that there was some emphasis on how much Batman cared about Jason and wanted to do right by him (up until the end where he was trying to throw him off), but while I understand it's somewhat necessary from a story standpoint I feel like they had Jason go a little too off the rails here. He's much more nuanced than someone who would kidnap Tim and put him in this situation, but I guess he had to be an antagonist at the end of the day. And Batman didn't leave him to die, he freed him from his bounds before going to secure Joker. The problem was Jason wouldn't let Bruce get away without taking Joker out .

Deathstroke and Sunny...for sequel bait? Or to make their appearance feel more consequential. I'm still disappointed we never got a Batgirl vs Sunny fight (so Batgirl at least got to do something significant on-panel other than the rescue). I guess Jason is the Grant/Joey to Sunny's Rose in the Deathstroke family they have set up here

I mean, it doesn't get any better than Dini writing The Joker. Honestly I'd say Joker was more on-point in this series than Batman. I loved how he wouldn't let someone force him to kill Batman and pointed how there was really no convenient way to deal with Jason that didn't end with a lot of questions. And just admitting he hasn't thought about Jason since that night .

I have mixed thoughts about this series overall but I'm hoping they can deliver a fun ending with the Harley and Ivy Issue .
You must log in or register to reply here.

Batman Adventures is great! Question too...