The ground-breaking animated series is now available in HD on Digital and Blu-ray! Discuss the release right here! 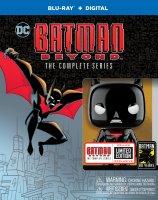 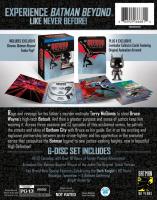 Synopsis: The extraordinary Batman Beyond: The Complete Animated Series Limited Edition package features approximately 1,500 minutes of entertainment spread over four Blu-ray discs, plus the two bonus discs of enhanced content. In addition to a newly-remastered Blu-ray presentation of Batman Beyond: Return of the Joker, there are 15 featurettes on the bonus discs, highlighted by two new inside looks at the beloved television series, led by Nostalgic Tomorrow, a gathering of Batman Beyond production talent and cast led by executive producer Bruce Timm and actors Kevin Conroy and Will Friedle, the voices of Batman and Terry McGinnis, respectively. The bonus discs also spotlight four episodes with audio commentary from Timm and select members of the production team.

Collectibles within the stunning packaging include an exclusive chrome Batman Beyond Funko POP, and four beautifully-designed lenticular art cards produced especially for Batman Beyond: The Complete Animated Series Limited Edition. This ultimate collectors Blu-ray box set will be individually numbered for a Limited Edition release of 50,000.

Batman Beyond: The Complete Animated Series Limited Edition Enhanced Content includes
-Nostalgic Tomorrow – A Batman Gathering (All-New Featurette) – Many of Batman Beyond’s core production team and actors gather for an enthralling roundtable discussion of the evolution and execution of the animate series. Join producers Bruce Timm and Glenn Murakami, casting/dialogue director Andrea Romano, director James Tucker, writers Bob Goodman & Stan Berkowitz, and stars Kevin Conroy & Will Friedle as they take a wildly entertaining trip down memory lane.
-Knight Immortal (All-New Featurette) – A visual and visceral celebration of the Dark Knight’s 80 years of crime fighting, narrated by storytellers of the past, present, and future.
-“Tomorrow Knight: The Batman Reborn” (Featurette) – Storytellers explore the rise of Terry McGinnis as Batman and Bruce Wayne’s relationship with the young hero as he mentors a new Dark Knight for modern times.
-Batman Beyond: Return of the Joker (Feature-Length Film) – The beloved hit animated film from 2000 is included in the box set – fully remastered for your enjoyment.
-Audio Commentaries – Enlightening audio commentaries by filmmakers and voice actors for four key episodes: “Rebirth, Part 1”; “Shriek”; “Splicers”; and “The Eggbaby.”
-Featurettes – A dozen inside looks at the genesis, production and effects of Batman Beyond. 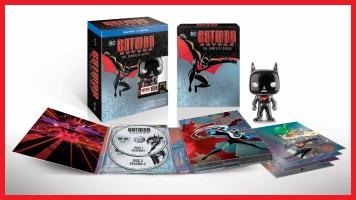 Hopefully this is the right place to ask... but do we know if WB will release a regular jewel case version like they did with BTAS?

Dusty said:
Hopefully this is the right place to ask... but do we know if WB will release a regular jewel case version like they did with BTAS?
Click to expand...

No, there won't be a non-deluxe edition for this release. There will be just one kind, the set that comes out next week.

Yojimbo said:
No, there won't be a non-deluxe edition for this release. There will be just one kind, the set that comes out next week.
Click to expand...

WHAT!? Really? That's dissapointing. But I did see this on blu-ray.com....

Are you sure ? EDIT: Just saw that tweet, Gary was just replying to someone asking if there was a regular version available, presumably at the moment. He must have replied ''no'', truthfully, but wanting everyone to get the limited edition now. It makes no sense to have the limited edition being the only edition.

Gary is in the business of selling. I wouldn't always take his word as gospel in these matters.

The 'Vanilla Edition' is rumoured for December. We'll just have to wait and see if it comes to pass.

Dern. I waited for the vanilla BTAS release as the price was MUCH easier to swallow, plus I can’t stand the book/foldout type cases. I guess I could just create my own like I did Justice League. But I’ll wait for a Walmart, Target, or Best Buy sale Of this for hopefully $60-70.

Didn't they say the same last year with Batman: TAS? I think it's safe to say that one version is coming. Blu-ray.com even has cover art for it: Batman Beyond Blu-ray

I assume WB will do what they did with Batman: TAS and release one sometime in late November and they will not confirm it until the day is comes out. I bet we'll see listings on retailer sites soon.

I’m so impatient. I skipped the BTAS set as the price was really steep at the time. I want to wait for a regular jewel case set of this... but I do fear this may not sell as well as BTAS so we may not get that for a long while. I also have a Best Buy coupon I can use and can get this for about the price I got the jewel case BTAS set.... dernit what should I do? ‍♂
Last edited: Oct 29, 2019

A comparison clip from Batman Beyond: The Complete Series showcasing the HD remaster was released by Warner Bros. Home Entertainment. It is available to view at The World's Finest.

Colors seem a bit off on the remastered side. I'm cautious about this.

-batmat- said:
Colors seem a bit off on the remastered side. I'm cautious about this.
Click to expand...

That’s because when they were animated they were using cel animation cell color... that’s why they were warmer colors when they switched to doing digital coloring in season two

I'm about 4 episodes in, and the differences - especially the brightness/darkness of the colors is noticeable. Definitely an improvement. Though of course, you can tell the sets/props are painted in the old school way. The new color tone definitely reminded of the later seasons but I haven't yet watched the season two and on material but that should be another comparison test.

I bought this, but I’m still on the fence about opening it. I made a custom cover for justice League season one set and it’s so much cooler than the one WB made, so I guess I could do the same here and then just have the collectible stuff in my giant memorabilia closet. lol
They might do a vanilla release, but it’ll only be 5-$10 bucks less most likely.
hmmm

When will the standard edition of Batman Beyond: The Complete Series on Blu-Ray be released and be available to order?

The World's Finest has posted up its review of Batman Beyond: The Complete Series. To check it out, click here or on the image below: 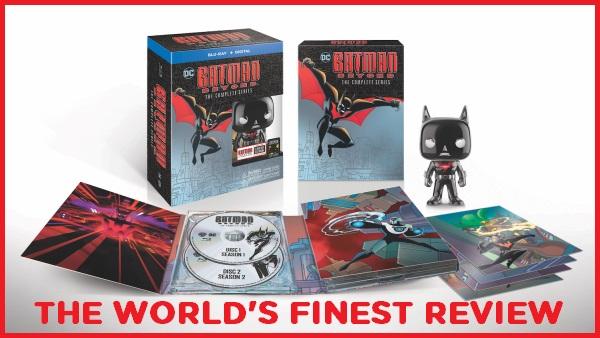 ​
What do you think of the collection?

JonnyModlin said:
When will the standard edition of Batman Beyond: The Complete Series on Blu-Ray be released and be available to order?
Click to expand...

I asked the same thing... nobody except WBA knows. It’s silly they don’t offer both versions, but “eh” I guess.
I have had my copy unopened since release (I have a 45 day return policy.) So I was waiting to see if they’d announce a vanilla release or if I’d have time to just make my own jewel case covers.
I may open it this week, I’m not sure.

Amazon UK are now listing Batman Beyond - The Complete Series (Regular Edition) for £60. Frankly, it's not that much cheaper than the deluxe at £70, but the packaging is nicer, I think.

The Deluxe Edition is already OOP over here in the UK (WB never seems to realise how popular these shows are). US fans on the fence may want to hold off a little while longer if Funkos and art cards aren't your thing, as I'm sure the regular edition is coming soon as well (No matter what Gary says). 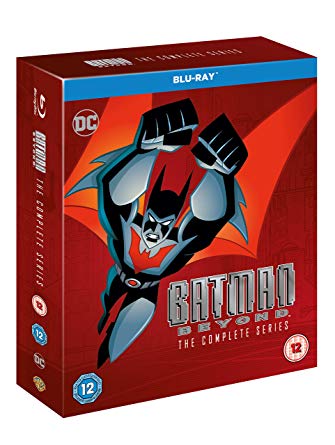 If you're in the US and plan to just get this Region Free set from Amazon UK, I would just caution you if you never bought a Region Free Blu-ray before - be aware there's a still possibility your player still won't play it. For example, in the past, I've had issues with a Samsung player not working but a standard, no frills Sony player working.

The Digital Bits has posted its review of the set.
You must log in or register to reply here.

Yesterday at 9:50 AM
Classic Speedy

Fone Bone
I finished the final issue of Gilda And Meek (Gilda And Meek #33 "Dark Child: Part Two: The Pilot, Un-Iverse #47) today. I had been planning it for 30 years, and it ended exactly the way it did in my fifteen-year-old head. This is a milestone I NEVER expected to reach. Huge day for me.
Today at 12:07 PM •••

SweetShop209
It turns out that, while the CGI for Stillwater is done by Polygon Pictures, the 2D stories told by Stillwater are animated by Studio Fost, who did post production for Wolfwalkers, and have done other works for Cartoon Saloon.
Today at 3:58 AM •••
G
Ghoster1987
eeeh. I guess i'll skip this season for anime as far as new ones go.
Yesterday at 6:35 PM •••

Vuxovich 5YearsOnEastCoast Vuxovich wrote on 5YearsOnEastCoast's profile.
Just compare Xiaolin Chronicles' voice acting to the voice acting of this show. I can't believe someone in the 2010s was inspired by a 1990s obscurity. Apparently not a good sign. How about that?
Yesterday at 4:13 PM •••