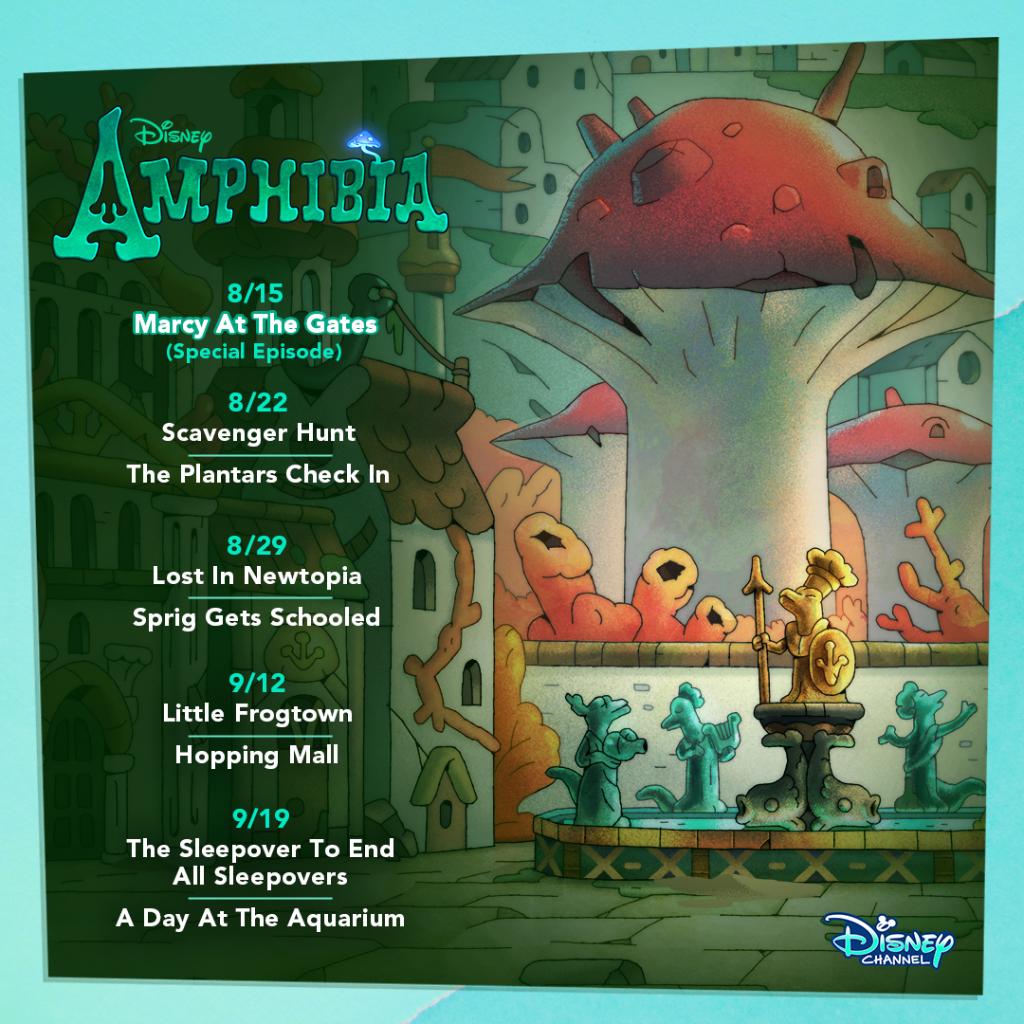 Broadway's Susan Egan and actor Max Mittelman are set to guest star as Renee Frodgers, a director and manager of an acting troupe, and Francis, a method actor, in a new episode of Disney Channel's animated series 'Amphibia' airing Saturday, July 25.

Well we haven't had a Polly focused episode in a while, if ever. Well this one we see Polly as a kid with kid like problems, something we really haven't seen. I love those truck drivers and them going against expectations.

Wow this was a great episode. I think I am in love with Renee, she is awesome. A disillusioned director, though the ending does give hope that maybe she regained her trust, I guess we could see. I wouldn't she came back in the big season finale battle.

Interesting in that these two episodes, we don't see the mech like we have all season.
Reactions: Cartoonfan13
C

Really Excited and Nervous for Toadcatcher.

"Truck Stop Polly:" Nice seeing a Polly focused episode. I felt for her; the gang was kind of harsh with their words. I wasn't surprised to see the rock turn out to be some sort of creature. I liked the violent pop up book at the end. Guess the "mech at the end of every episode" streak is broken.

"A Caravan Named Desire:" Neat episode. Renae was a great character; loved her design and voice. I hope we see her again in some way or another. I enjoyed all the acting references and jokes in the episode. I thought the scene where everyone was asking Anne for advice then blatantly ignoring her was pretty funny. Poor Hop Pop, having to cut his dream short.

The second segment is actually Hop Pop put in a compromising sitch, but he is still kept the respectable / likable characater I've come to know him as outta the main cast, while still being actually funny with it as well.

(IMHO) After his first S2 episode being an unfortunate let down, we were due for a High Tier effort focused on Hop Pop. Glad we got it here.

The first segment rather let me down (ending up Mid Tier for me) with how annoying Polly comes off as its focus - I kinda wanted to smack her at first and it's only thanks to how it ends that I stopped feeling such. I hope the next time she gets focus, it's better than this turned out for me.
A Night at the Inn still remains top quality (High Tier), in terms of Polly episodes for me, personally. I expect S2 to top that, someday. I want them to - that way, I can truly believe this show is on its way to being better than it started (I mean, it started out great, don't get me wrong. It's all about keeping it up, honestly!).
Reactions: RainbowCupcake

Truck Stop Polly: Polly was very annoying with her selfish antics. HopPop was clearly too tired to read to her and Anne and Sprig were too busy to entertain her as well (though, she did have an opportunity when Anne and Sprig were sent to count the items they since it wouldn't require both of them to do the task). I loved how the truckers didn't blindly side with her and even pointed out her selfishness. That Roc grew super fast. I hope it wasn't fully grown yet though as while it was big, there have already been big birds on the show and I think Rocs dwarf those. I like Soggy Joe's role in the episode. He added quite a bit of humor to the episode.

A Caravan Named Desire: I liked the main plot, wasn't thrilled about the secondary ones. Anne needs to get pass her hatred of old things. HopPop was a lot more respectable here. I hope we get some episodes of his past deeds getting him noticed(you know the ones that got the toads wanting him dead).
Reactions: Cartoonfan13 and Zanneck

Here's the announcement for next week's episode.

Okay this was an okay episode. It is kind of funny how Anne and Pops have become the co parents to Sprig and Polly. Anne most of the time is the big sister, but sometimes she could be the parent. I did laugh at every time Hop Pop tried to middle into her love life. The villains were predictable characters, bickering is their un doing. We didn't have to have a body swap for Sprig and Polly get to do each other's characters.

It is interesting what Grimes and his crew status with the kingdom. It resembles Zuko and Iroh status with the Fire Nation at the beginning of the second season. They are kind of outcast got to rebuild.

Sasha's relationship with Grimes is very interesting. It is pretty clear to me Sasha clinging to Grimes, she had no father figures in her life up to this point. In a way that also resembles Zuko. Even though Grimes looked kind out of it, he still able to be a psychiatrist for Sasha. Grimes is growing on me.
Reactions: Zanneck
G

Something tells me that if the toads do overthrow Newtopia, Sasha will be the real leader.

Overall, I don't think I need to explain too much in detail why Toadcatcher >>>>> Quarreler's Path, in terms of these latest premieres - At least, I hope not, that is.

Basically: Sasha becoming a great antagonist and Grimes slowly getting himself together to do the same, which is High Tier? Simply far more engaging than Polly and Sprig bickering for what could be the umpteenth time, which is rather middling, honestly.
Last edited: Yesterday at 9:28 AM

Interesting to see that just as we learned that the Toads were of a higher class than the Frogs in Season 1, now we're learning that the Newts are of a higher class than the Toads in Season 2. And now Grime, with Sasha backing him, is gonna try to shake up that status quo. I love Grime and Sasha's villainous friendship, btw, it's sincerely touching and not ever something I would have expected to happen back when our first look at the characters was Grime keeping Sasha prisoner.
Reactions: Zanneck

Quarreler's Path: Okay episode. Can't blame HopPop and Anne for ditching them to get some alone time. Of course they were gonna see why they were ditched by the two(?) Olm siblings hunting them. I loved HopPop's banter about Anne's "boyfriend". Anne being stupid about getting Sprig her phone to call them in case of trouble. At least it came in handy of seeing through the cave.

Toddcatcher: Now this was a character building episode. Despite Grimes wanting to raise an army and taking over, I really don't think he's gonna be as big of antagonist as his appearance implies he would be. Plus, considering how him and Sasha are behaving around each other, they both seem to be heading towards being redeemable characters. Sasha said in the first season's finale that they are just "slimy little frogs", and yet she considers Grime, a toad (who might be less slimy since toads are less aquatic than frogs, but would still be slimy none the less) a friend to her. Sasha, while not knowing how to treat friends very well, again shows how much she values friendship as she was not only venting on losing one friend, but also training to protect another. This was hinted at in the first season when she protected Anne from that bully.
Grime has shown not only a silly side of himself(anyone else want to see him and HopPop talk about Suspicion Island to each other?), but also a lot of wisdom as he knew why Sasha was training so hard.
The newt warrior was interesting, her defeat fitted with her constant praising of her accoplishments.


zoombie said:
Sasha's relationship with Grimes is very interesting. It is pretty clear to me Sasha clinging to Grimes, she had no father figures in her life up to this point.
Click to expand...

SweetShop209
I wish a happy birthday to Corey Burton (65) (voice of Professor Ludwig Von Drake for over 30 years, as well as Megatron on Transformers Animated), Sumalee Montano (48) (voice of Arcee on Transformers Prime and Katana on Beware The Batman), and Travis Willingham (39) (voice of King Roland on Sofia The First and Thor on many Marvel cartoons since Avengers Assemble).
Today at 10:58 AM •••

Fone Bone
Taking a mini break from Anime Superhero. Possibly for months. I will still post my reviews and in my Un-Iverse thread but I will not be engaging in discussions with people on other topics. If you need to reach me PM me.

I apparently have been offending people on the site and I need to take some time and space so I don't do it anymore. There's nothing else I can think of to do.
Today at 6:06 AM •••

SweetShop209
The winner of this matchup is "Quack Pack" with 2 votes. ScoobyNatural got 1 vote. The next matchup is between Phineas And Ferb: Star Wars and Scooby Doo And WWE: Curse Of The Speed Demon.